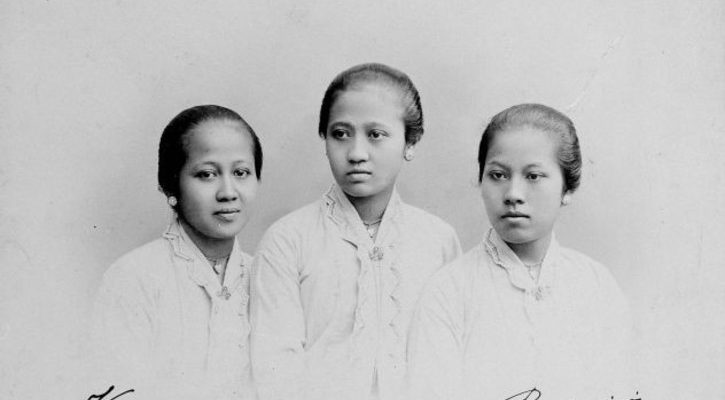 the mother of all men and women

moving with time across eternity

thousands of light years have passed

my feet have walked

from heavenly nirvana to the thorn covered earth

and I do not care

my tears scatter across the flat plains

I can be anyone I want to be

Persephone experiencing her fate, living in the underworld

jealous Hera or Medusa with snakes in her hair

I can be Amba whose curse provoked the Baratayuda war

and led Drupadi to be offered at the dice table

I can be Dewi Pohaci, the beautiful woman born from the earth

Even Sita, longing for the Golden Deer

Dying in the fire because my purity made me nervous

Or Savitri, who staggered to find her man although she was beautiful and clever

Perhaps I could be Calon Arang, the powerful woman victim of patriarchy

Or maybe Bahu Laweyan, with a beauty spot on my shoulder,

Whose body makes me the target of domestic murder

I can be anyone at all. Madonna, Lady Gaga or Mother Theresa

Because I am Patih Goah

Woman, mother of all men and women

she was locked away

imprisoned behind the regency walls

no longer allowed to go to school

which she truly loved

it was time to marry

even though that was

not what she wanted to do

she gave birth to a son

despite all her limitations

she fulfilled her ambitions

she wrote to remember

she wrote to unravel her aching heart

they have made her famous

because she was a woman?

her thoughts have survived time

and are talked about

by the women’s movement

to this very day

because she is a writer?

the name of a woman

The midday sun tried to pierce the red tin roof

over the broad verandah, I was almost asleep, sprawled

untidily in the old wooden cane chair, half dreaming…

from the corner of one eye, an eagle appeared and began to fly

over the swamps, near Mount Boongan

The bird rose circling in the wind

flapping its wings at the sky, higher, higher,

always circling in the wind around the swamps, near Mount

Boongan. Suddenly the eagle, no more than a black dot, vanished,

vanished in the endless blue sky

that was the moment, I can see it. I was drawn to the spot

Sumedang – mist and wind and death. Disaster was approaching.

“Merpati flight CN-285 disappeared around Sumedang the pilot, captain Fierda Panggabean (29), was born in Tapanuli, she was the first woman pilot to qualify to fly planes of that type, MNA CN-285 smashed into Mount Puntang The iron bird was destroyed.”

Habibie said the plane was in good condition, strong,

Habibie said it was possible that the pilot Fierda was confused.

According to an SAR offical, the deceased was still in the cockpit, her hands still held the controls… the rain, wind and the mist seemed to have conspired with death…

and later Fierda’s body was covered with our nation’s flag and escorted by her colleagues, her fellow pilots,

covered by a flag,

who proved to the local people

that a woman can fly a plane,

to the outside world…

the sky and doves,

One is lost two remain.

The eagle vanished from the swamps near Mount Boongan

A woman’s breast appeared. I heard the sad voice of a flute

weeping over the eucalyptus and casuarina trees

as they slowly waved in the wind

blowing towards eternity in the blue sky

my nation… despite our current globalisation

I still find the disturbing reality

that your village girls

are the victims of early marriage

that they are married before the age of sixteen

when they should be at school or joking with their friends

the are forced to maintain families

to serve their husbands and children, do the housework,

even to fight life and death as they give birth

must we allow this situation to continue?

this nation does not yet offer peace

to its village girls

A Thousand Temples for You

I have built a thousand temples for you, Jonggrang.

Then why are you reluctant to strike the mortars and pestle so that the roosters can crow and call the sun to rise?

Why are you reluctant to blow on the lamps so that the sun will rush to provide its early morning light earlier than usual?

Why are you reluctant to put the pots on the fire so that the sound of boiling water will encourage folks to find warmth in the middle of the kitchen?

Why are you reluctant to sweep the floor with a broom so that the dust will swirl and fly out the door and invite the wind to dance its morning greetings to the sparrows in their nests hidden in the leaves of the mango trees?

I am no Bandung Bondowoso, who could only complete 999 temples of the thousand you demanded.

You are too extreme, Jonggrang.

This time I will not curse your body to become a statue.

There is no need for that.

Now I curse your heart:

May you never know love