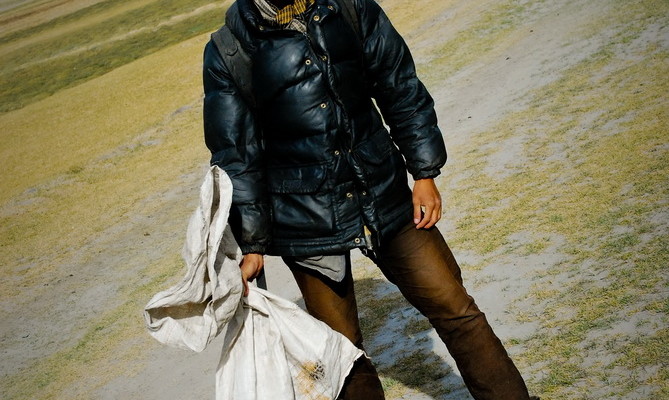 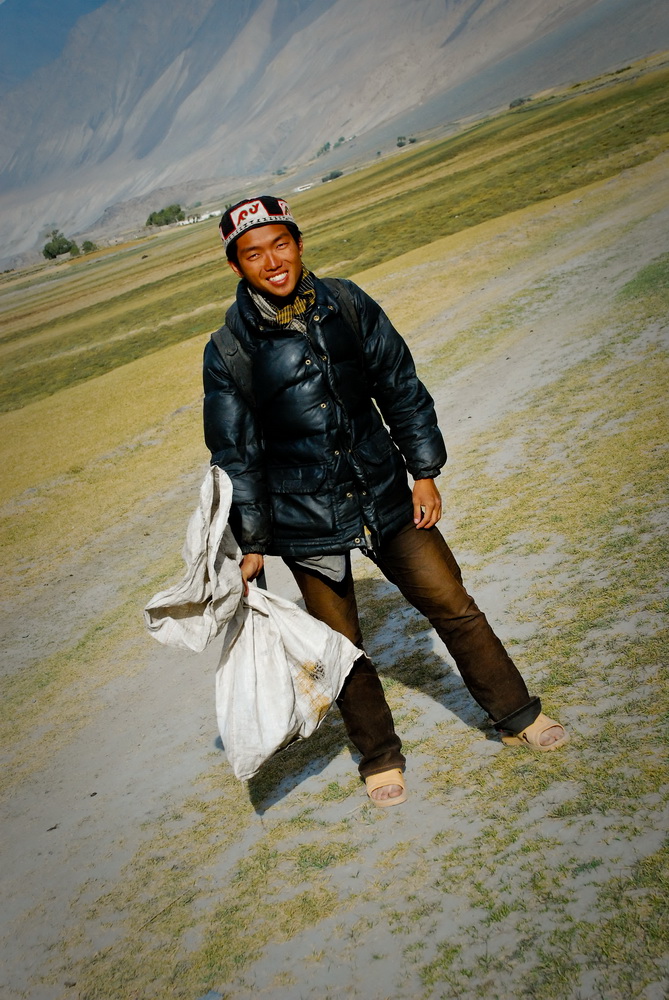 Passing borderlines is almost a daily routine for Agustinus Wibowo. The travel writer and photographer from Indonesia picked up his backpack at the age of 19 and started to travel throughout Central Asia. He has lived in Afghanistan for three years as a photojournalist and has written two bestsellers books about his borderless travels. Wibowo’s current latitude: Beijing, China.

Agustinus Wibowo (30) left his village Lumajang in East-Java, Indonesia in 2000 to study Computer Science in Beijing. From there he started his travels to Mongolia where he got robbed on the first day. That didn’t hold him back to travel to even more ‘dangerous’ countries like Pakistan and Afghanistan in 2003.

As a true budget backpacker he took off with only 300 US dollars. ‘I traveled by the cheapest train in China, 70 hours on a hard seat. Then by public transport and hitchhiking trucks in Pakistan. Crossing the border with Afghanistan I used horses and donkeys or just walked my way. I also stayed with local people, that’s why it’s so important to learn the local languages. The key of budget traveling is full adaptation and daring to suffer.’

A Fascination with -Stans

From all the places in the world Wibowo got fascinated by Central Asia, countries with names ending with –Stan: Uzbekistan, Turkmenistan, Tadsjikistan, Kyrgyzstan, Kazakhstan, Afghanistan and Pakistan. This year his book got republished: ‘Garis Batas’ (Borderlines: Journey in Central Asian Countries). Agustinus Wibowo’s blog unveils a glimpse of what his books are like and include stunning and intriguing photos of everyday life in those ‘unfamiliar countries’. 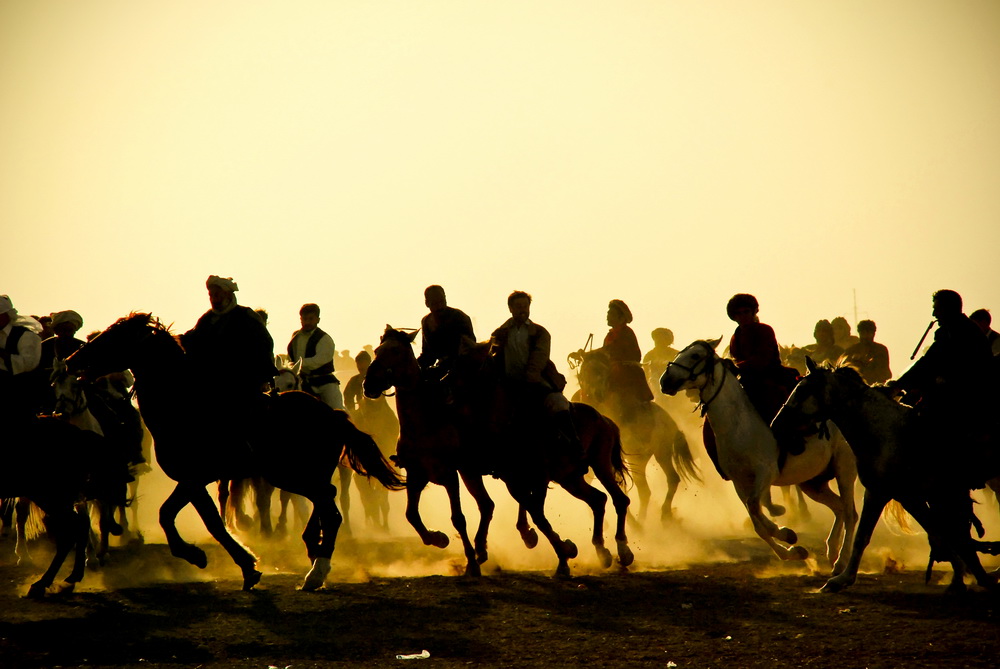 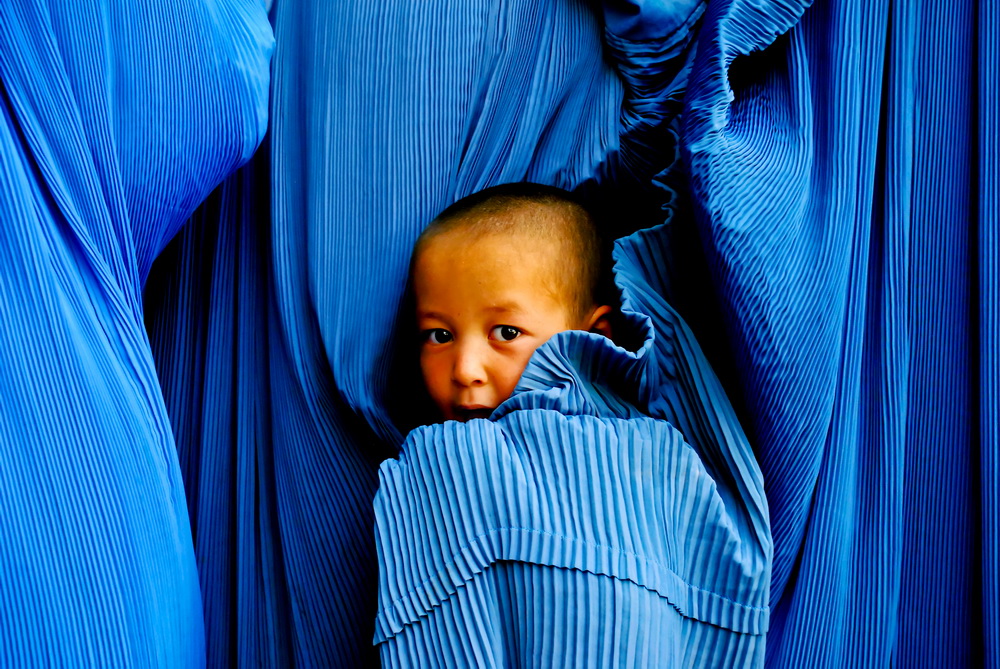 Boy in burqa, By: Agustinus Wibowo

Wibowo: ‘The ‘Stans’ might be the furthest place in the imagination of Indonesians and most people never even heard of the countries’ names. For me it was the pictures of the grand Islamic buildings in Samarkand and Bukhara in Uzbekistan, central cities of the Silk Road between China and the West. I fell in love with Afghanistan since my first visit in 2003. It was because of the hospitality and beautiful colors.’ 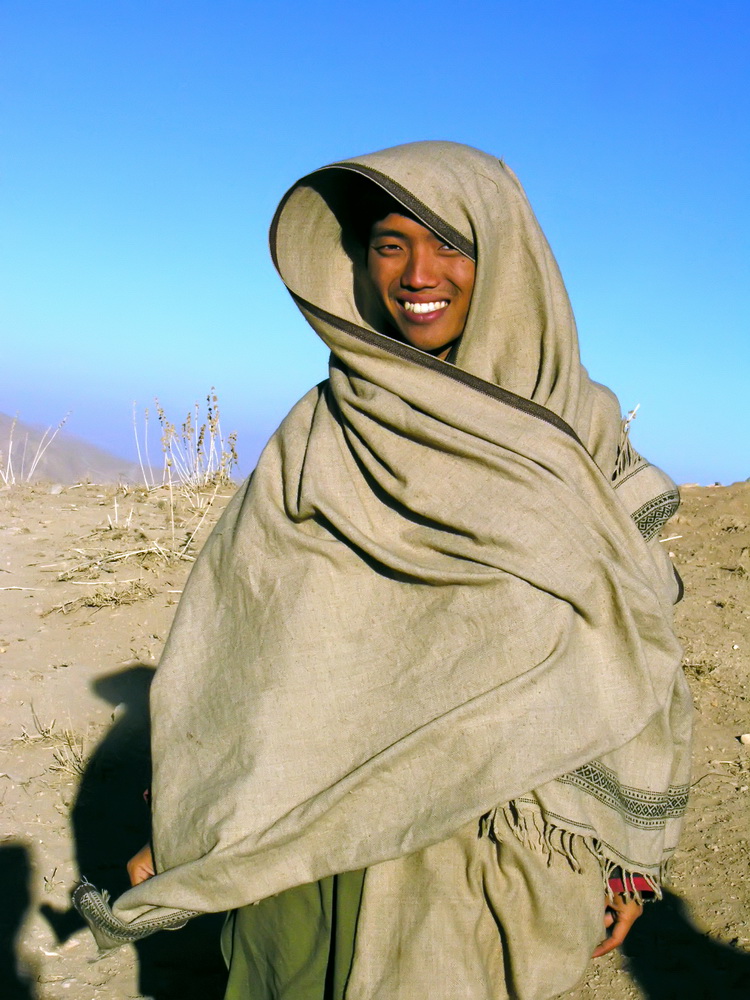 Me, being Afghan in Afghanistan, By: Agustinus Wibowo

He went back to Afghanistan three years later. Wibowo: “I traveled around for 4 months hitchhiking and using a guidebook from the seventies, the hippie era. I was amazed that many things didn’t change for decades. I became more eager to learn the mystery, the struggle of the people and their dreams despite of the prolonged war.’

Wibowo finances his travels by working as a photojournalist and travel writer. “I went back to Afghanistan in 2007 because my money was stolen in Uzbekistan. A news agency accepted me as a photojournalist in Kabul. I stayed for almost 3 years and I learned about Afghan life by living with the locals.’

Wibowo wrote his first book about this intense period in Afghanistan that is also republished this year: ‘Selimut Debu’ (Blanket of Dust: Dreams and Pride from War-torn Afghanistan). As a photojournalist in Kabul covering the bomb blasts was inevitable. ‘War is human tragedy. Seeing corpses everywhere, blood and body parts was a very traumatic experience. The local Afghans said: ‘Here everything is expensive. Only one thing is cheap: human life.’ Living in war zones somehow changed my sanity.’ 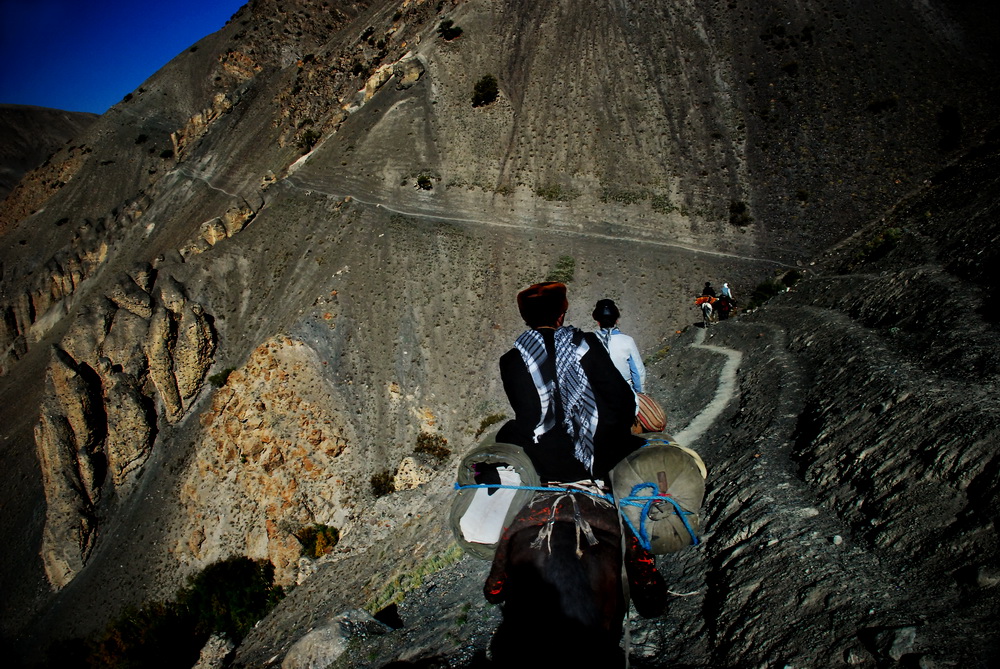 A dangerous road to Pamir, Afghanistan, By: Agustinus Wibowo 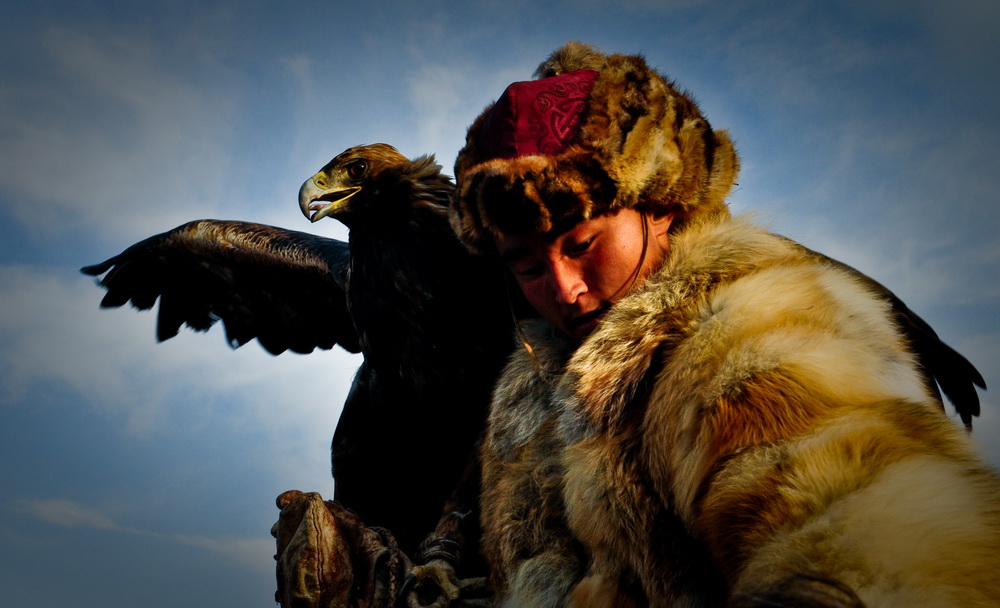 An eagle hunter in Mongolia, By: Agustinus Wibowo

Saved by being Indonesian

Traveling was a personal challenge for Wibowo. As an introvert person he used to live in his own world. ‘When I was in primary school I collected foreign postage stamps and had more than 120 pen friends from about 70 different countries. From their letters, handwriting and even the smell of the paper I developed my childhood dream to travel. I thought it was impossible until I went to study in China.’

Traveling threw up questions about identity. ‘Being a Chinese Indonesian I have experienced the racial discrimination during the New Order. I realized how borderlines and identity were something that really marked my childhood. At school we were all Indonesians, but on the streets people would swear at us: Cina! Cina!’

It raised a conflict in his heart: was he Chinese of Indonesian? ‘I used to support China at the badminton finals with Indonesia. But, when I went to China and realized I didn’t belong there, my sense of Indonesian identity became stronger. Then I supported the Indonesian team, because it became part of my pride and ego. But now I would rather say: I just enjoy the game.’

The art of traveling, as Wibowo sees it, is about losing the ego, although at the same time it also boosts the ego. ‘I started with a feeling of conquering a challenge: being able to go to hard-to-visit countries, to have many visas in my passport, to have stories to tell and photos to show. Then after living continuously on the road for such a long time it became meaningless.’ 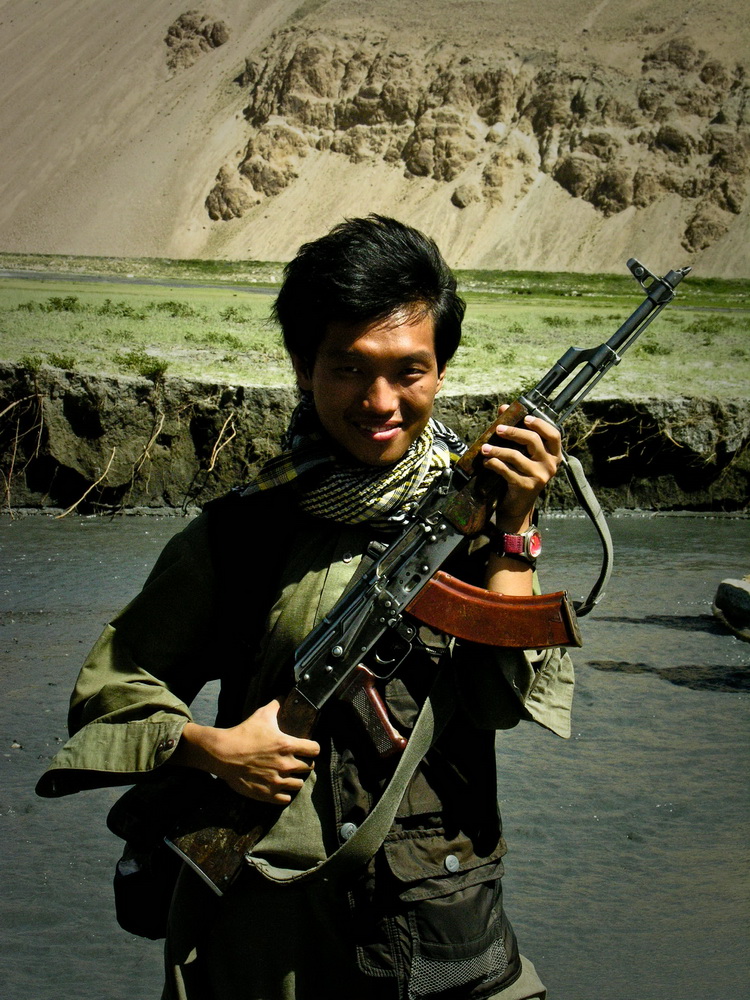 Agustinus with an ak-47 at the Wakhan Corridor, Afghanistan, By: Agustinus Wibowo

‘Why? Because life is not about ‘exoticism’ or ‘beautiful shots’, I never use the word ‘exotic’ anymore in describing a nation or people. I live in with people that struggle to survive and it made me realize that despite our differences we have so much in common: we cry, laugh and dream about the same things. I found reflections of my culture, values, my childhood ideas and myself. I know myself a lot better now.’

Traveling as an Indonesian citizen has been quite remarkable sometimes for Wibowo. ‘In some countries they never even heard of Indonesia or they think it’s part of Malaysia. In some places they were excited because I was the first Indonesian they had seen in their life. In Pakistan and Afghanistan they would hug and kiss me yelling: ‘Good Muslim!’ As they assumed I am, but I’m not. It did save me from almost being robbed and kidnapped in Afghanistan, but I survived because I insisted I was Indonesian.’

Living abroad developed another perspective of his image of Indonesia. ‘Like Afghanistan we have religious conflicts and cultural pride. I believe the future of Indonesia will be bright only if people and the government start to think with a long-term vision. Now we always seem busy with unnecessary conflicts, while other Asian countries like China and India already accomplished great achievements. Indonesia is rich in natural and human resources, so we have all the potential of being a great nation.’ 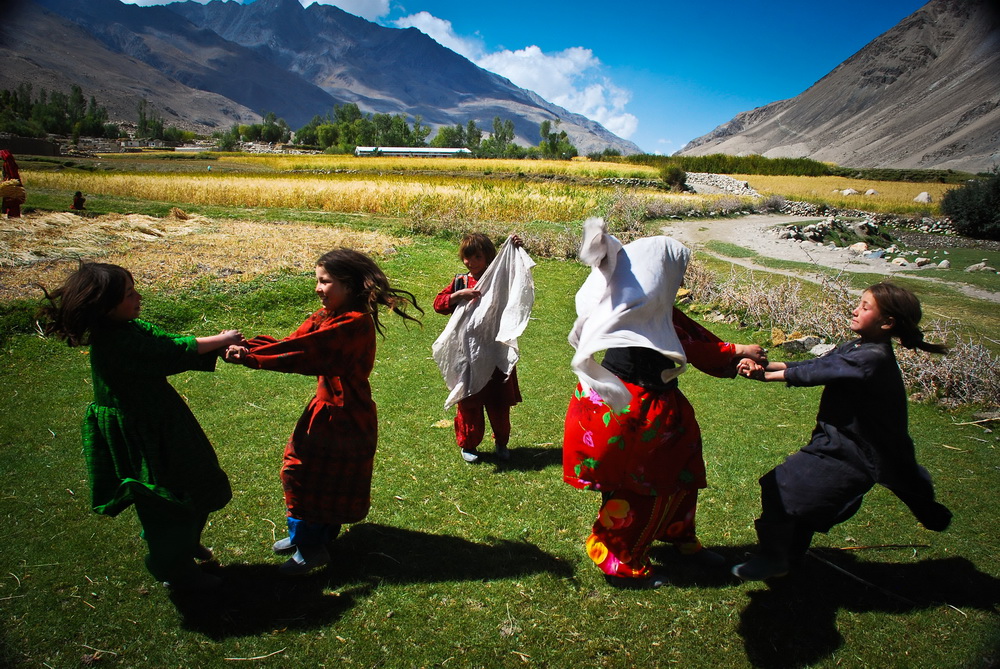 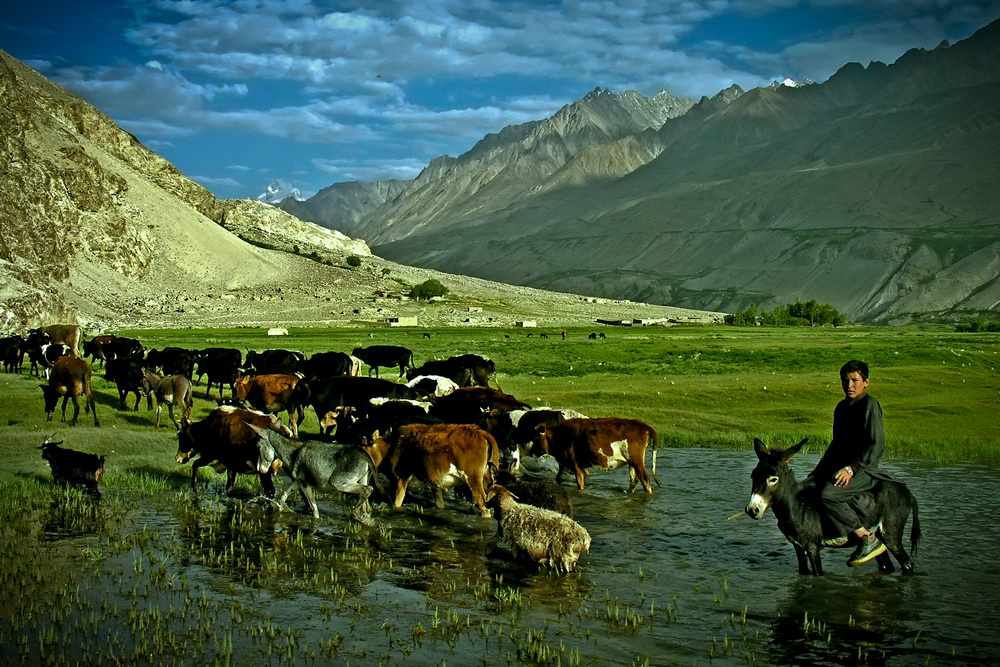 A young Wakhi shepherd from Ghoz Khan, the Wakhan Corridor, By: Agustinus Wibowo

Wibowo’s intention for his ‘Grand Overland Journey’, also the title of the third book he is currently working on, was to travel through Central Asia to South Africa. He ended up crossing borderlines in the ‘Stans’ and is now living and working in Beijing to be able to finance his future trips. ‘The more I travel, the slower I become. It also has something to do with a change in my philosophy of traveling. I feel when I stay longer it’s the only way to understand a nation of culture.’

Wibowo doesn’t care about strict deadlines or full schedules when living on the road. ‘As I traveled Pakistan in 6 months, Central Asia in 6 months and stayed in Afghanistan for 3 years I realize it gets more impossible to travel to South Africa at this speed. But it’s not the destination that is important, it’s the journey.’