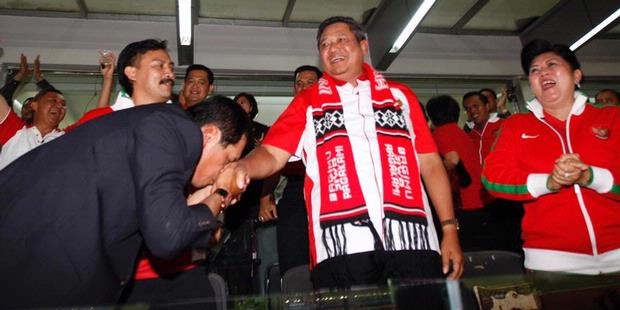 Indonesia vs Malaysia on Battlefield Soccer: An Indonesian Perspective

In the past few weeks, not a day has gone by without Indonesians talking or hearing about the ASEAN Football Federation (AFF) Suzuki Cup, in which Indonesia is one of the finalists. You can see the euphoria on the streets, television, Facebook shout outs and on Twitter.

Not runner up again!

It is just as well. Not much can be said of the Indonesian national soccer team’s regional or international achievements for years! It has never been a strong contender in the AFC Asian Cup. The last time Indonesia’s soccer team won gold was in the Southeast Asian Games in 1991. The current management of the Indonesian soccer association, in the hands of Nurdin Halid, is controversial to say the least. The man is a convicted corruptor and people who can read bahasa Indonesia can plough through the list of Nurdin Halid’s sins here.

Since the establishment of AFF in 1996 (called Tiger Cup until 2004), the best result Indonesia achieved is coming up as a runner-up. It would be very upsetting, if the Merah Putih (Red and White, the colors of Indonesia’s national flag) again became runner-up this coming December 26 and 29.

This is the first time in AFF Cup’s history that Indonesia meets its eternal archrival, Malaysia, in a final. The social-cultural tensions will certainly be felt in and outside of  the stadiums where the two teams will play the final’s two legs. The predictions are in. Both teams have equal chances of winning.

A few days ago, I received a broadcast message on my Blackberry urging those who wish to go to Gelora Bung Karno stadium in Jakarta, to see the second leg of the final, to wear batik. Similar messages have apparently been circulating, to “bring angklung (a traditional musical instrument)” or “bringing reog masks” or any other cultural attribute that the Malaysian government once claimed to be theirs (I have heard several people jokingly said they should have just claimed Nurdin Halid).

News about harsh treatments of Indonesian guest workers in Malaysia and border conflicts that peaked with the arrest of Indonesian maritime personnel by a Malaysian patrol in Indonesian waters in August this year stoked up the disputes. Indonesians at home threatened to sweep Malaysian citizens and send them home. Certain civilian groups even stepped forward asking to be sent to war! Two Indonesian television stations aired programs about how a physical war with Malaysia, should there be any, could be won. All were done under one dictum: Ganyang Malaysia (crush Malaysia) — a term that goes back to the era of Indonesia’s first president, Soekarno, who coined it.

Discourses saying that Indonesians and Malaysians “are from the same cluster” have not done much. “We will make them pay” still lingers in the hearts of many Indonesians. Winning “battle after battle” in the cultural front seems to help diminish this resentment toward this particular neighbor. UNESCO’s recognition of batik, keris, wayang and angklung as Indonesia’s cultural heritage have been seen as part of the victory. 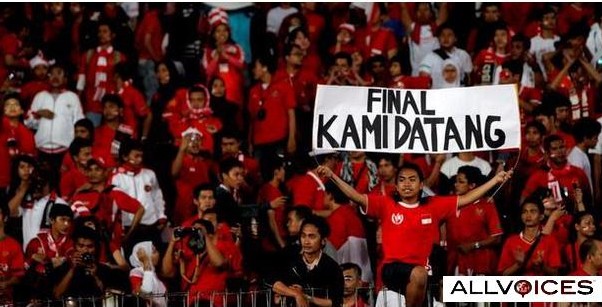 Indonesian fans are waiting for the final, courtesy of All Voices

We can lose to any team, but not Malaysia

Today, soccer has somewhat become part of the Indonesian modern culture as well. We still talk about how Indonesia, in 1938, became the first Asian country to be in the World Cup (it played under the name Dutch East Indies, during the Dutch colonial era). Almost every Indonesian village has its own soccer field. The film “Garuda di Dadaku” (Garuda on My Chest), a film about a boy who dreams of one day playing for the national soccer team, fared very well in the box office. Indonesians of any age took part in rejoicing with the rest of the world during every world cup — you may be interested to find out how many of us came late or did not show up for work during the course of the previous one, but records on the national absence are not public.

And now, the national soccer team has a chance to show the world that Indonesia still has a place in this sport.

With all that in mind, the Merah Putih team is now carrying a heavy burden. They cannot fail in this one “battle.” As a friend put it, “We can lose to any team, but not Malaysia. If we lost, the players might as well look for a new career, and a good place to hide.”