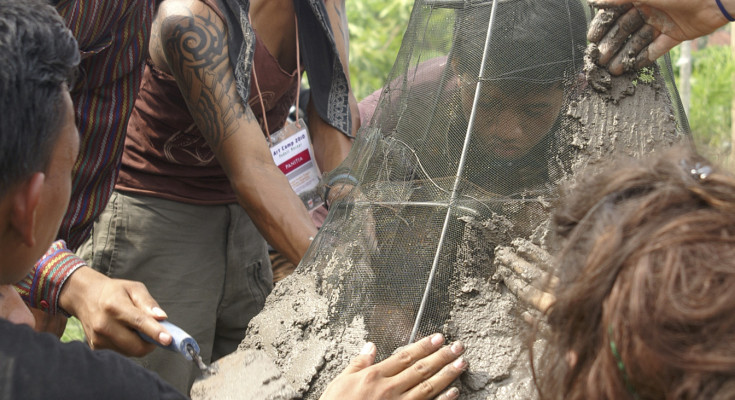 Two men and one woman smeared with volcanic ash were dragging withered branches to one of Borobudur Temple complex’s entrance gates. Behind them were clown-like faces singing loudly to beats produced by various household appliances being hit endlessly on a pick-up truck. People quickly gathered around this happening art performance, part of the annual Indonesia Art Camp, conducted this year on November 25 – 29. 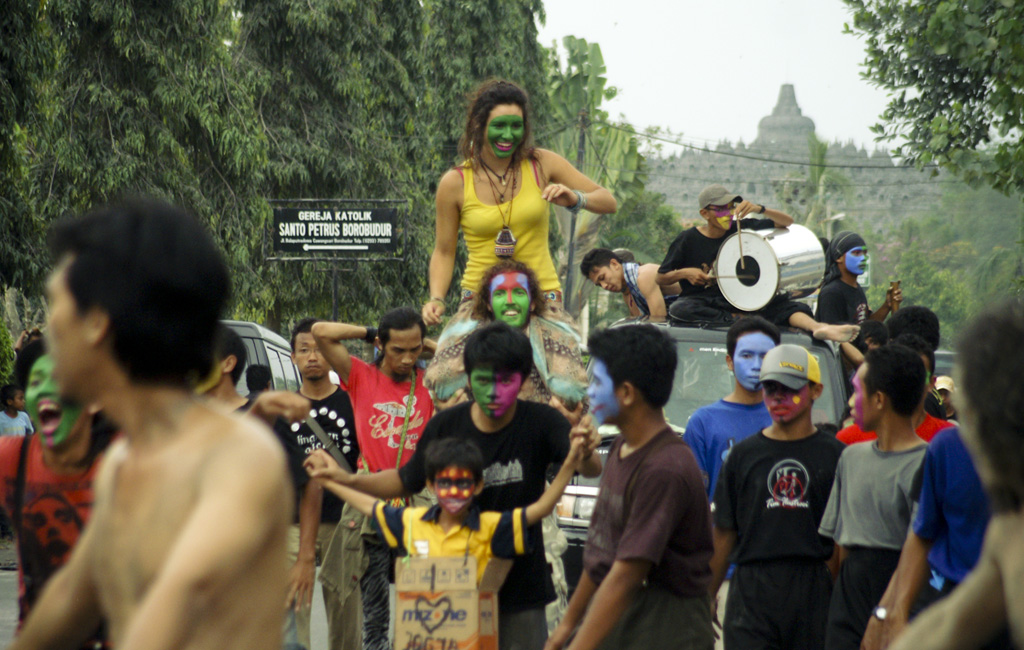 It was good to see the faces of the Borobudur people light up like just now. We haven’t had anything like this since the recent eruptions of Merapi,” Andri Topo, one of the performers, said after the group had returned to its base camp in a field across from Pondok Tingal, a complex of hotel, restaurant, art venues and wayang museum, near the temple.

This year’s art camp was swiftly designed to respond to the recent eruptions of Mount Merapi, which had sent ash-fall to the district of Magelang, where Borobudur is located, for weeks. While hot clouds, lava and floods of volcanic materials were the main concerns to the people on the Mountain’s southern and eastern slopes, rains of ash turned the Borobudur sub-district on its western side into a gloomy landscape of white houses, dried up vegetable and tobacco fields and dead trees.

The temple complex is still closed for public too, significantly reducing the number of foreign and domestic visitors to the surrounding areas, and wilting the people’s economy abruptly.

“We initially planned to organize the event in Wonosobo. However, with the eruptions of Merapi, it only felt proper to bring the program here so the participants could help out the villagers and evacuees as they developed or shared their artistic skills,” Nundang Rundagi, head of the organizing committee, said.

According to Yasmi Setiawati of Borobudur’s Kloneng Art Community, also the event’s public relations officer, the most important thing for this year’s art camp was that it helped lift the spirit of the villagers around the temple.

“It is the spirit of togetherness that can make us rise from the ashes,” she added. “That is also the main basis of this event.”

Despite the lack of promotions and media exposure, the event managed to attract around 100 participants, mostly artists and students, from Central Java’s districts of Magelang and Wonosobo, from West Java’s Majalengka and Tangerang, from East Java’s Ponorogo, from Yogyakarta, as well as several artists from abroad. 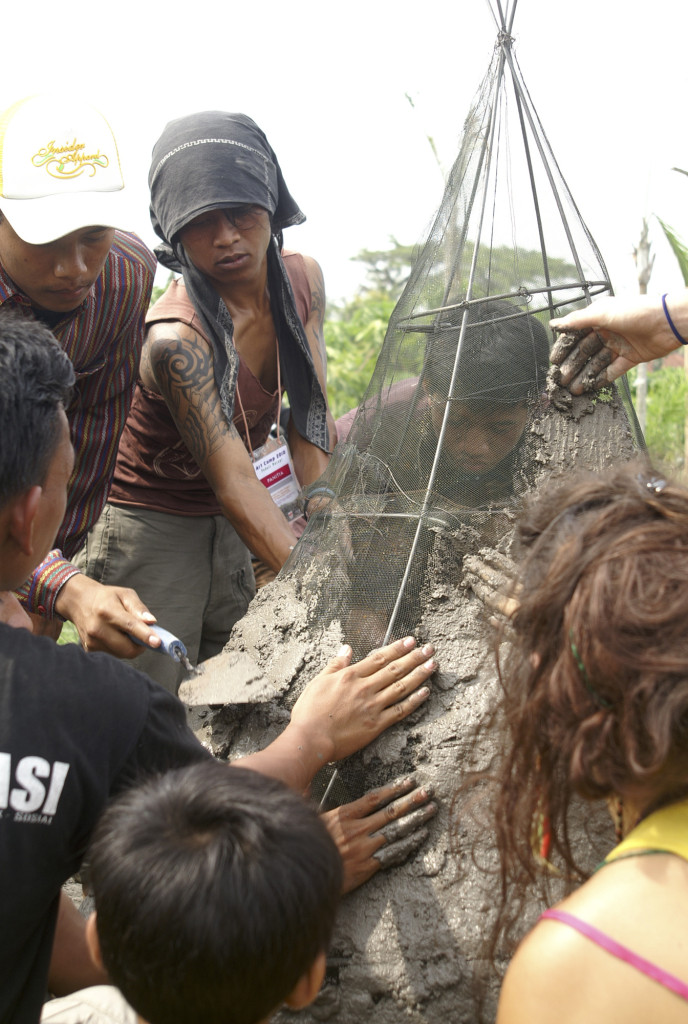 Building a Merapi sculpture from volcanis ashes, by: Dalih Sembiring

With social activities such as cleaning up buildings, giving art performances in an evacuation center and distributing food and clothes to villagers, the participants also engaged themselves in music jamming, poetry reading, dancing, painting — sometimes around bonfires — as well as workshops and discussions. Together, they also created a man-sized sculpture of Mount Merapi complete with bas-reliefs and tiny decorations, using, of course, the ash of Merapi itself.

The previous three art camps have always been held in Borobudur’s Bejen Hamlet in May, anytime near the holiday of Waisak, attracting thousands to the Borobudur Temple and the nearby Mendut Temple to celebrate the Buddhist holiday. This year, the committee decided to postpone the event until November due to management issues. Next year’s Indonesian Art Camp will be held in May in either Wonosobo or Majalengka.

The Art Camp showed the creative ways in which people can deal with the loss and damage caused by the Merapi volcano. In a sense the Indonesia Art Camp 2010 formed the start of the healing process of those affected by the recent eruptions.

For information on how you can participate in Indonesia Art Camp 2011, send an e-mail to indonesiaartcamp@yahoo.com or contact Yasmi Setiawati at +6285228845653.