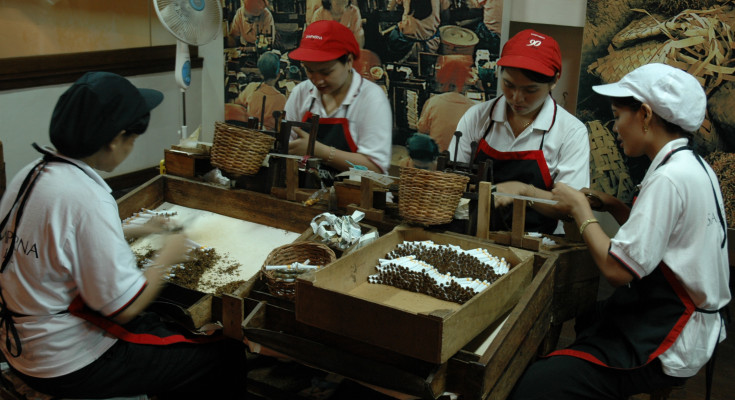 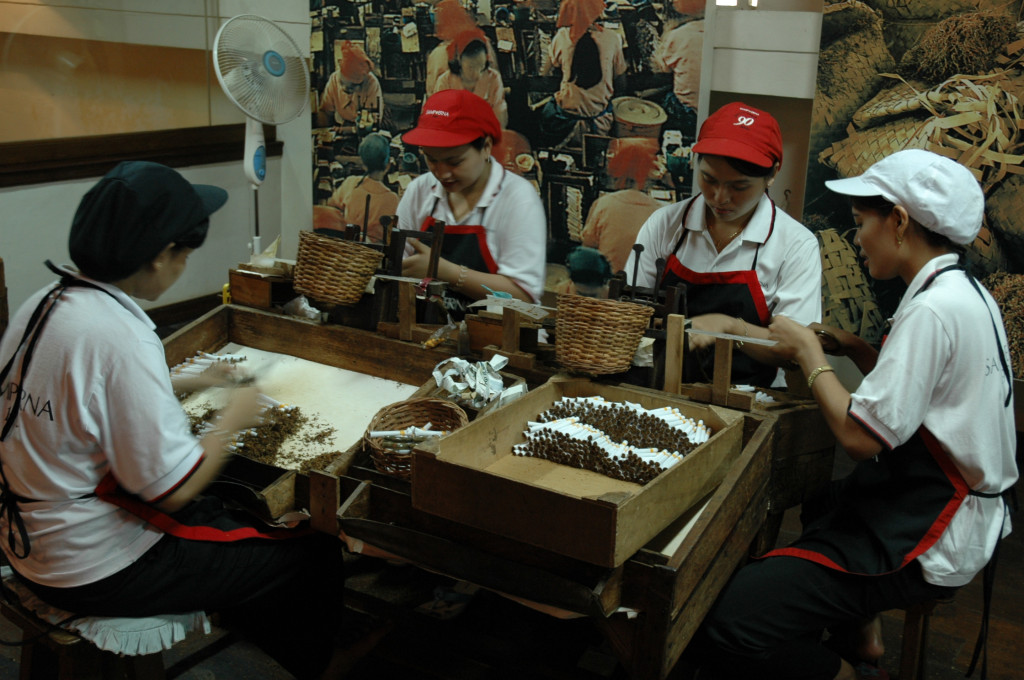 The Sampoerna Museum in Surabaya, By: Ogi Fran

Second hand smoking comes second nature in Indonesia. Where in most other countries people at the bus stop will start frowning and coughing when you light a cigarette too close to them, in Indonesia new born babies are cheerfully greeted in a cloud of crackling kreteks.

The kretek or clove cigarette is still immensely popular, in part because a stubborn conviction in its health benefits continues to exist up untill this day. They are regarded infinitely healthier than rokok putih (white cigarettes, such as Marlboro).

A Javanese by the name of Haji Jamahri created the kretek cigarette in 1880, wanting to alleviate asthma and chest pains. Apparently he succeeded. What did eventually cause him to pass away the tale doesn’t tell us. The tar levels, exceeding 30 miligrams (regular cigarettes around 1 miligram) and nicotine levels, often double those of regular cigarettes (1 mg), do point in a certain direction.

Current estimates place 63% of Indonesian men and 5% of Indonesian women in the smoking category. This makes Indonesia third on the list of worldwide tobacco consumption.

While the rest of the world seems to unite in an internationally orchestrated anti-smoking campaign, they calmly light up another one in Indonesia. Smoking inside public buildings and even cafes, which in Western Europe lead to an indoor smoking shed building competition, seems to be a common and accepted thing in Indonesia. The power of the tobacco industry is in large part responsible for the thick layer of tar that coats the so called green lungs of the earth.

As always, the trident education, economic  interests and far worse things, has firmly rooted itself in this issue. Only in 2009 the government sort of admitted that smoking is addictive. Probably they had a hard time saying it, because the government tax choked them up: Since 2005 the government has steadily raised the tax on tobacco, in 2009 reaching a neat 56.7 trillion Indonesian Rupiah (6.2937 billion U.S. dollars).

Of course the main goal of these tax raises was diminishing the number of smokers, and not to reap the benefits of the nation’s most popular addiction. The huge profit that was made was just a side issue. Unfortunately this noble policy as of yet has not reduced the number of smokers, so the government feels urged to increase the tax on tobacco with another 5%.

The relatively young population of the country makes up the working population, but also the largest consumer market. Tobacco companies are very much aware of this and try to get a foot in the door during every little step of the way. Their banners adorn pop concerts, soccer matches, festivals, and tv programs. The blatant product placement tactics serve but one goal: To get as many people as possible to smoke. Instead of a  decent education in school about the dangers of smoking, there’s a bigger chance that students will receive their diploma in front of a life-size banner of a cigarette brand.

4 years old and addicted to smoking: the case of Ardi Rizal

Besides the traditionl kretek (clove), there’s now cappuccino, chocolate, black tea, mango, herbal and countless other new tastes.The old powerhouses Dji Sam Soe, Gudang Garam and Djarum are tied in a vehement competition with tens of other brands that by way of brand image and taste will mostly focus on young people.  How young? This year there was a national outcry when 4 year old Ardi Rizal showed the nation his cigarette addiction on YouTube.

His dad gave him his first cigarette when he was 18 months old, to calm him down when he was crying. The now 4 year old Ardi is addicted as can be and will throw tantrums and cry if he doesn’t reach his 40 cigarette benchmark.

I’m not worried about his health. He looks healthy to me.”

After the (inter)national outcry Ardi was eventually sent to rehab. 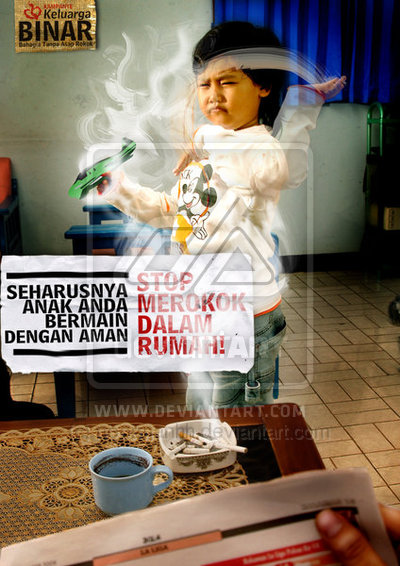 A campaign to stop indoor smoking, By: Noorman Wijaksana

The anti-smoking movement had a small window of opportunity and launched several campaigns to raise awareness about the health risks of smoking. Every anti-smoking initiative is met with heaps of rustling Rupiah’s, making it an uphill struggle for the low-budget anti-smokers.

The last point worth raising is that smoking, much like other issues such as animal rights and environmental preservation, aren’t top priority in Indonesia, because there’s always something far worse going on. Smoking simply is not that musch of an issue if we compare it to the natural disasters, poverty and economical challenges that the nation faces.

To illustrate the power of the Tobacco industry, the ‘smoke free refugee camp’ at the foothill of the Merapi volcano, that erupted several times in 2010, was sponsored by the cigarette brand Sampoerna. This effectively made the Sampoerna Rescue Camp, located next to a smoking and smouldering volcano, one of the few smoke free zones in Indonesia. Don’t the do-good people of Sampoerna deserve a wreath of fresh tobacco?