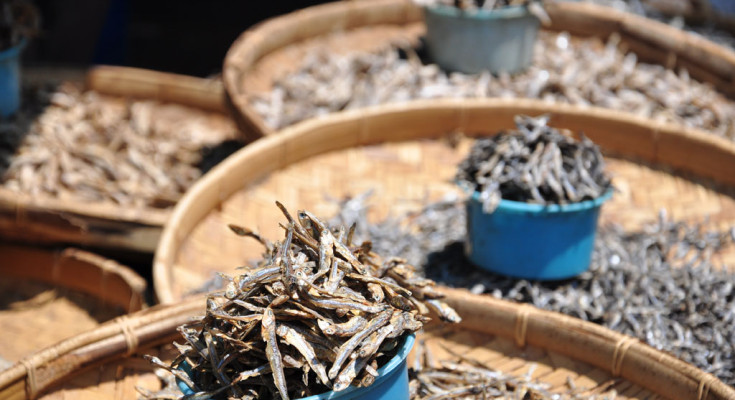 Ikan Asin: On the Historical, Nutritional and Sentimental Properties of Salt fish 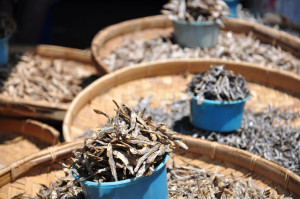 On the western edge of Jakarta, in Kampung Joglo, there is a warung famous for its salt fish. The warung is always full, and its customers come from every segment of Indonesian society, from motorcycle-taxi drivers to government officials and film stars. They all come for the ikan asin sayur asem-salt fish with vegetables in tamarind soup-the house specialty of the warung’s owner, Nek Gabug. No one pays much attention to the fact that the dish is high in protein, with plenty of vitamins A and D and almost no cholesterol. They love it because its goodness is immediately evident-it tastes wonderful, with its complex sensations of pungent, sour, spicy, and salty-and because it is deeply familiar.

Several thousand years ago, waves of migrations from southern China began to populate the Indonesian archipelago. They came, of course, by sea, and they settled along the coasts, bringing culinary traditions that were rich in maritime survival techniques: they knew how to catch fish, how to cook fish, and how to preserve fish. In the same way that forest-dwellers depended on game, coastal people depended on fish, and in Indonesia still, the word for “side dishes” is the same as that for “fish”.

The preservation of fish would become nutritionally important for early Indonesians who lived in the interior of the great islands, and commercially important for those who sold the preserved fish to them. But a more immediate motive for preserving fish surely arose from seasonal factors such as weather at sea and the breeding cycles of different species. A surplus of fish in one month could offset hunger in another, if only one could keep the fish one caught today from rotting tomorrow in the tropical heat. The solution-discovered by different civilizations all over the planet-was in drying, smoking or salting the beasts. 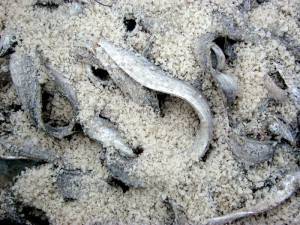 The technique of salting may have been introduced to the interior by traders of salt and pja (salted sea fish). According to the Gondosuli II inscription (827 AD) and Kaladi inscription (909 AD), the traders, who generally were from Nusantara, South Asia and East Asia, had already been living in the town of Temanggung in the hinterlands of central Java since the early ninth century. It is possibly from those traders that the hinterland people of Java learned to preserve fish that they bred in fish ponds or rice fields, such as sepat fish and pike fish, still today the most popular fish for ikan asin.

In 1598, the Dutch explorer Willem Lodewycksz reported that the people of the Indonesian archipelago couldn’t really enjoy their rice if it wasn’t accompanied by some salt fish. And they didn’t like the taste of meat either unless it was accompanied by a fish-based condiment called balaciam (belacan, or shrimp paste)-rather as Westerners prefer meat accompanied by mustard.

Salt fish remains a staple of the Indonesian diet, not only because of its high nutritional content and the low cost of production, but also because other meat, such as goat, beef, duck and pork, is still widely associated with festival ceremonies among different religions. Reciprocally perhaps, salt fish is generally not considered suitable for religious feats.

When the Dutch East India Company (also known as the VOC, but referred to by Indonesians as the Kompeni) began to gain control of the archipelago in the sixteenth century, it did not much change people’s eating habits. Reports written by Dutch employees of the Kompeni say that the busiest markets in Batavia were the fish markets, and the Dutch apparently liked fish a lot. They encouraged the fishing industries around the Bay of Batavia; but they didn’t really like salt fish. F. Valentijn, a Dutch clergyman who wrote of his travels in the East Indies in Oud en Nieuw Oost-Indien (1724-26), relates that fish or meat preserved with salt were seen possible causes of serious illness or even death.

But the Kompeni’s officials were by no means unaware of the demand for salt fish among the Javanese of the interior. Because of the equatorial heat, fresh fish could be transported no more than some twenty kilometers inland. The Kompeni gained control of the salt fish industry by monopolizing the supply of salt in 1648 and charging higher prices for salt in Java than elsewhere. This made the production of salt fish in Java unprofitable.

P.N. van Kampen in Visscherij en Visscteelt in Nederlandsch Indie (1922) relates that by the 1750s, the Javanese were obliged to import salt fish-mostly from Siam, Manila and China, but also by way of Singapore from Japan, northern Borneo, Serawak and Penang. Between 1876 and 1880, imports of salt fish amounted to f 2,00,000; in 1916 it had reached f 9,00,000. In the early twentieth century, Singapore’s role as the largest exporter of salt fish to Java was feeling competition from Chinese-run import agencies in Bagansiapi-api, an important fishing town on the east coast of Sumatra.

During the economic depression of the 1930s, demand in Java for the high-quality but rather expensive ikan asin imported from Singapore and Bagansiapi-api was in decline. As early as 1926, Javanese were already starting to buy domestically produced salt fish-cheaper but of lower quality. Banjarmasin-which in the sixteenth century had been a foremost supplier of salt fish for Java-returned to the fore, together with Madura and Makassar. With the development of railways from the harbors to remote areas of Java, the delivery of salt fish eventually stretched up to the farming regions.

Nime, who has been selling ikan asin in Tanjung Duren, Jakarta since the 1940s, says that since the economic crisis of the 1930s the market remains dominated by the cheaper grades of salt fish. Despite Indonesia gaining independence, the improvement of the economy, and the gradual dismantling of the salt monopoly, high-quality salt fish is still out of the reach of many ordinary people since it is now produced as an export product. Even when it’s offered on domestic markets, the price is too high.

Meanwhile, Kartinah, who has been selling ikan asin for more than sixty years at the Cikini market in Jakarta, makes an interesting point: it was during the 1930s’ depression that salt fish became incorporated into Dutch and mixed Dutch-Indonesian (“Indo”) cuisine. She says that whereas once those of Dutch and Indo descent looked down on the local population-calling them “salt fish people” whose fate would always be “salty” or unlucky-hardship forced them to replace their cheese with salt fish. But to maintain a modicum of snobbery, they used the pricey imported ikan asin from Singapore or Bagansiapi-api, which most local people could not afford. This salt fish was the yellowtail catfish (Pangasius pangasius) called jambal in the local language. Salted jambal became known as jambal roti, meaning the salt fish that goes with bread. To this day, jambal roti is considered a salt fish of prestige.

The rise of tourism in the twentieth century introduced salt fish into the menus of hotels, restaurants and the cruise ships that brought tourists from Europe and America to the East Indies. This was achieved primarily through the colonial Dutch custom of the rijsttafel feast-a glorious culinary display of wealth and cultural enthusiasm. The inclusion of salt fish in this grand menu-despite the fact that many Westerners cringed at the idea and objected to the taste-was to enhance the rijsttafel’s authenticity as “real Indonesian” food. This in turn served to enhance the exoticism of the East Indies. But an authentic Indonesian meal would be served with everyone sitting around on a mat on the floor, eating with their fingers and sipping bowls of soup. Salt fish served Dutch style with European creativity became geroosterde zou’tevis met azijn, sambel goreng kering van gedroogde teries, and sometimes Indonesians found the food combinations odd.

These days, chefs in hotels and restaurants still experiment with salt fish and new food combinations, and sometimes it works. Since the 1980s, salted pike fish and fried rice (ikan gabus dengan asin nasi goring) has been popular in smart cafes.

A well-known writer once told me that one of former president Suharto’s sons is a such a fan of salt fish and fried rice that it led to the closing of an Indonesian bank in America. He had gone to Las Vegas for a vacation and used up all the bank’s cash because every morning he had to charter an airplane to fly to Los Angeles for salt fish and fried rice.

It is not usual for Indonesians to experiment in their cooking. There are fixed traditions for cooking. It is believed, for instance, that the best way to prepared salted peda fish, for example, is by frying it with chilies, onions, tomato, petai beans, and corn. Salted teri fish should be prepared with peanuts, to become sambal goreng teri. Salted pike fish, sepat fish, and bulu ayam fish should only be fried, but they need to be served up with sayur asem.

Some Westerners find Indonesia’s salt fish too salty and the cooking too spicy. But most Indonesians still love their salt fish, not only because it’s tasty and nutritious, but also because it conjures a feeling of belonging to the collective experience of the past as a maritime community, a reminder that the nation is made up not only of land but also of water.