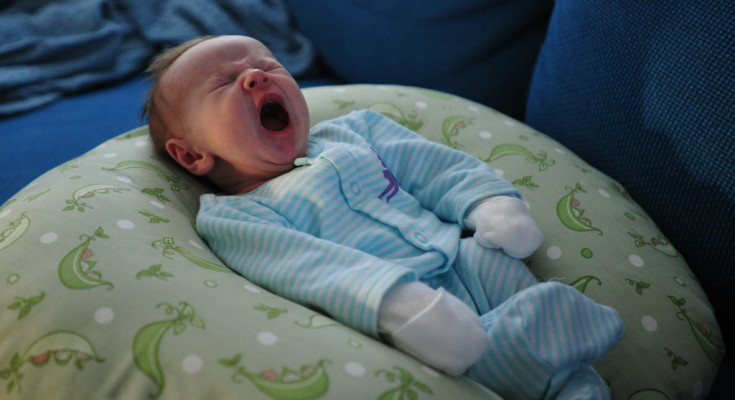 When I was a little boy, before I went to sleep, I would lie on my grandmother’s big belly while she chanted me a lullaby. It was a two-line song in the Karonese language of the Batak Karo people of North Sumatera: Uwi kola kati/ipenna karat menci. She never told me what the first line meant, but together this lullaby implies: “Go to sleep, otherwise the mice will munch at your teeth.”

The people of Lampung, the southernmost province on Sumatra island, sing poems called the hahiwang. Usually heard during traditional ceremonies or as a playful exchange between youths, hahiwang can also be a baby’s a pre-snooze chant.

Still in Sumatra, the song Dodoi Si Dodoi is a famous lullaby among the Melayu-speaking people. The lyrics are in modern Indonesian, and tell of a mother trying to put her crying baby to its forty winks while the father is away. Watch this Youtube version to get an idea (the extensive instrumental parts seem a bit much for a lullaby perhaps).

Many Indonesians are familiar with the word ninabobo as the common translation for “lullaby.” The word comes from a song parents would chant softly to get their babies to sleep: Nina bobo, oh Nina bobo/kalau tidak bobo digigit nyamuk (Go to sleep, Nina, otherwise the mosquitoes will bite). “Nina” is generally perceived as the name of a baby girl being hush-a-byed to slumber. Interestingly, Nana Bobo is also the title of an Italian lullaby. The rarely used lelabuai, from the Javanese non-definitive lela and the Indonesian buaian (cradle), means the same thing. “Bobo,” or “bobok” is an informal Indonesian word often used to replace “tidur,” meaning sleep.

If the Karonese and the Indonesian-speaking population seem to resort to threats to put their babies to sleep, the Central and West Javanese infuse their lullabies with hopes and prayers.

Watch this video for a BBSS Choir’s rendition of the lullaby Lela Ledhung:

It is impossible to include lullabies from all over Indonesia in this short overview, and I must also admit that my knowledge is limited to several examples from Sumatra and Java. Hopefully, this can be an introduction to Indonesia’s rich tradition in relation to the science of sleep, or an inspiration leading up to a more thorough research or a good night’s sleep.