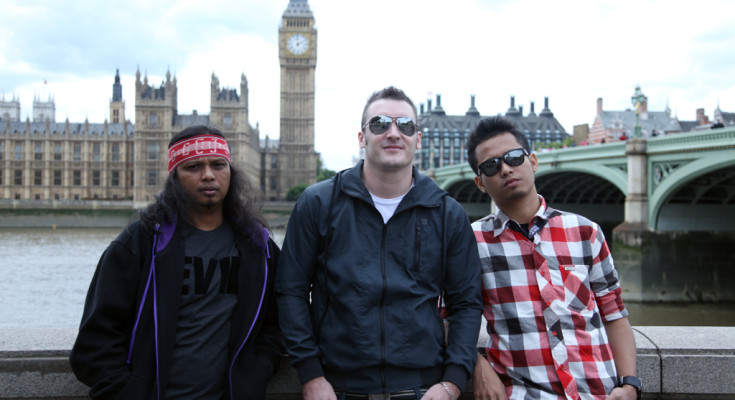 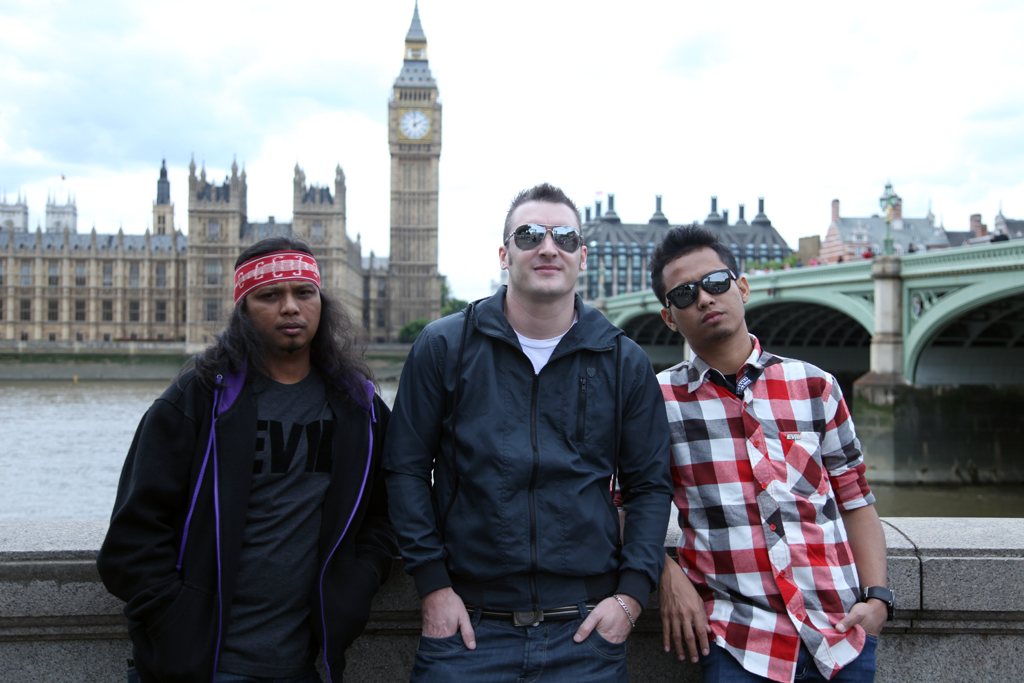 Gugun Blues Shelter in front of The Big Ben

Blues musicians are generally known for playing covers and recycling existing songs, which in turn gives this genre a certain stigma especially amongst young people. Gugun Blues Shelter, however, are shaking things up in the Indonesian blues scene, churning out album after album of a fusion of blues, funk and soul which has captivated audiences worldwide.

This blues trio have just returned from travelling half way around the world to play at London’s prestigious Hyde Park Calling 2011 as winners of Hard Rock Café’s Global Battle of the Bands, which saw them perform on the Main Stage proceeding world famous acts such as The Killers, Rod Stewart, Bon Jovi and the Kaiser Chiefs. “We just wanted to have fun and joined the competition for a laugh!” says bassist Jono, who is originally from Scarborough in North England. They definitely got their laughs, that’s for sure.

Jono came to Indonesia twelve years ago “in search of sunshine” and found it in Aceh, Sumatra. After moving to Jakarta and whilst working at The British Institute, he would regularly hang out at the Blues Bar in Menteng for jam nights. It was there that he would watch Gugun, now frontman and guitarist of the band, playing covers during the breaks. They got to chatting, jamming and eventually Gugun told Jono to try playing the bass. As it turns out, Jono is a mighty fine bass player and not long after, traded in his guitar for a bass, thus sparking the formation of this band.

Being an expat, Jono has had his fair share of issues from the government. “Once two plain clothes immigration officers were waiting back stage to catch me out.” He then pulls out his KITAS to show us that he’s legit. Without this little orange card, he could easily be deported from the country for working illegally and Jono has learnt not to take any chances.

So how did it feel to represent Indonesia at such a world famous gig? “It felt really good, “says Jono. “Not trying to blow our own horns or anything, but we’re a talented band and not many Indonesian bands get to go abroad.” But why so? It seems the government make it difficult for modern bands to obtain the correct visas, and followed by the expensive cost of flights and accommodation, hardly any local bands can manage unless they have significant sponsorship.

“The Cultural Minister won’t support modern musicians,” groans Bowie, the young outspoken drummer who joined the band in 2007. “Normally there are two music scenes; a commercial scene and an indie scene. In Indonesia there’s also the traditional scene, and that makes it three. The government always supports the traditional scene and not modern music, which is backwards. We should show the world what we have and that Indonesians aren’t cannibalistic cave-dwellers!”

Except for the recent Hard Rock tour, Gugun Blues Shelter have paid for all of their UK tours, and there have been five so far. They aren’t signed to a record label, and this is not because they’re ‘anti-label’ so to speak, just because so far no one has been able to offer them a decent deal that doesn’t leave them with scrapings to fight over. “So far we’ve managed ourselves.” But what about sponsors? “We’d love to have sponsors, but sponsors don’t need us,” says Bowie. “If anyone would like to sponsor us, we’d love it!”

In the meantime, this band will carry on doing what they’re doing whilst aiming for the stars. “We want to improve the image of modern Indonesia through our music in the eyes of the world.” Nicely said guys. Rock on.