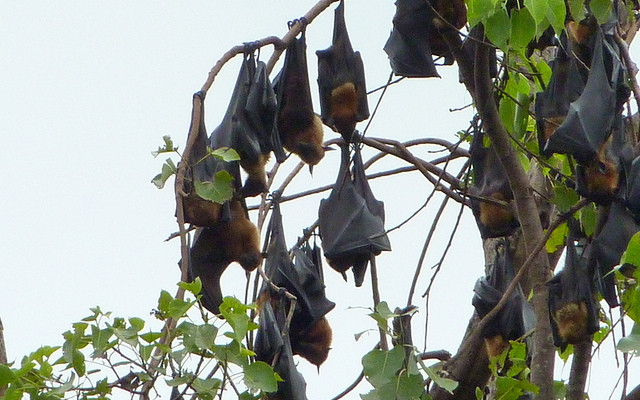 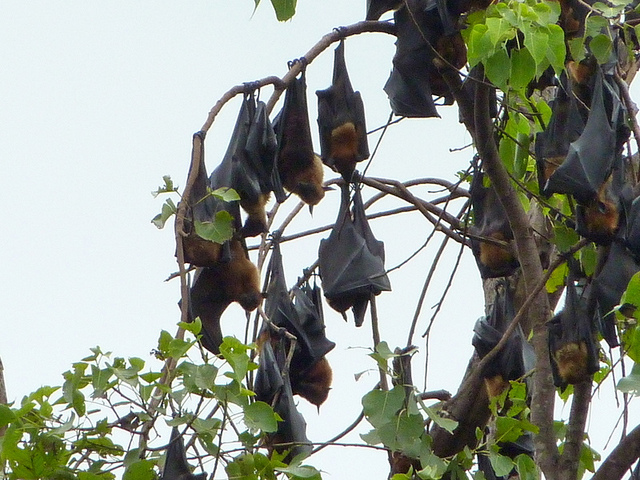 Fruit bats hanging from a tree in Battambang, By: Ronan Crowley

It was my husband’s idea to find the bats.

He’d heard about a cave near Battambang where millions of bats swarmed every sunset and was excited about finding it on our trip to Cambodia’s second largest town.

It wasn’t top of my hit parade but I thought it might be worth a look.

So we put our trust in a Cambodian moto driver outside Wat Banon who noticed our directional confusion and shouted “I take you to big mountain” and beckoned us to follow him.

As we neared the site, he pulled over and waved to us to stop.

Revving our rented 125cc rusty steed, we put the vehicle into low gear and navigated the hairpin turns and steep incline up Phnom Sampeau (otherwise known as The Killing Cave because of the atrocities committed there during the Khmer Rouge regime). It was too early for bats but we were treated to stunning views of the surrounding plains and ruins of an old temple where a group of friendly visiting monks were taking photos of one another.

As it neared sunset, we headed down the mountain until we spotted a group of people on the side of the road scanning the horizon as though they expected a flying saucer to drop in at any moment.

All of a sudden, we heard a flapping sound coming from a huge gaping fissure in the side of the mountain and the sky above us turned dark. Hundred of thousands –perhaps millions – of small black winged creatures poured from the mountain, all heading in the same direction in search of mosquitoes, leaving behind an acrid odor in their endless stream which lasted well beyond the hour we stood and watched. 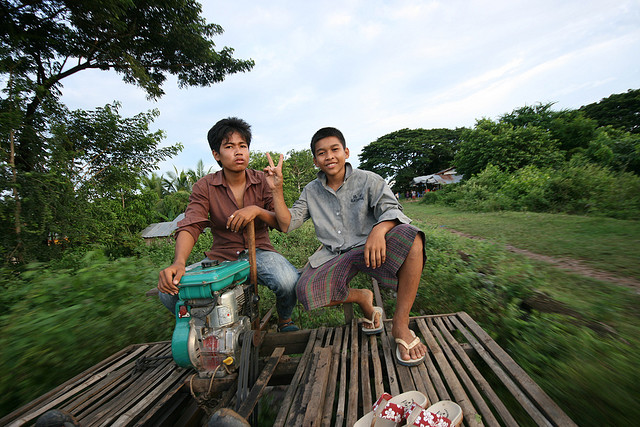 Battambang is not really known for its abundance of bats. It is known as the “rice bowl of Cambodia” since it’s the leading rice producer in the country. It’s also recognized for its famous (soon to be defunct) Bamboo Train, the Phare Ponlue Selpak circus and its collection of beautiful French colonial architecture and has the dubious distinction of being home to the country’s only winery (made from grapes, not rice).

There are fewer vehicles on the road than Phnom Penh or Siem Reap, no chaotic traffic and a much slower pace than in Cambodia’s other large cities. There are also a number of attractions worth visiting – both for the cultural appeal as well as for a relaxing (or energizing) weekend away.

Our schedule for three days included visits to Wat Banan, the bat cave (Phnom Sampeau) and Watkor village. It also included a kayak trip down the river and a failed excursion to the Bamboo Train as well as cheap foot massages, good cappuccinos (check out Kinyei Cafe and Café Eden) and a variety of meals around town. 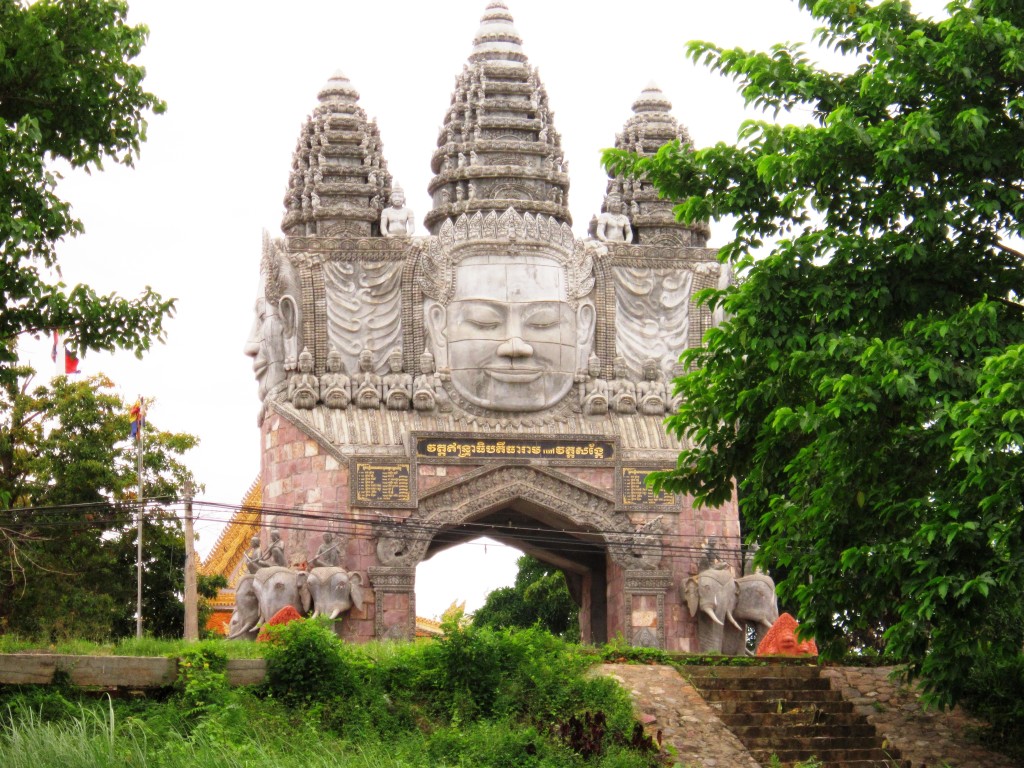 Wat Banan, nicknamed “mini Angkor Wat”, is a fascinating ruined Angkor-style temple which is still used as a Buddhist shrine. It’s located at the top of 359 stone steps so be prepared to sweat a lot – and to experience a great view from the top. The Wat is located 22 km from Battambang so you’ll want to rent a motorbike or take a tuktuk for the 45 minute trip, unless you’re an avid cyclist and want to experience the route.

Along the way, you’ll pass the Prasat Banon Winery where you can pay a visit, taste the wines and hear the story how the enterprising owners overcame odds in opening the country’s only grape winery. It’s not clearly visible from the road, so watch out for the sign around kilometre 10 on route 155.

Wat Kor is located two kilometres south of the town centre and is a small cultural village with a collection of traditional Khmer houses, dating back to the early 1900s. There’s no fee to visit but you’re expected to leave a small sum in the collection box. 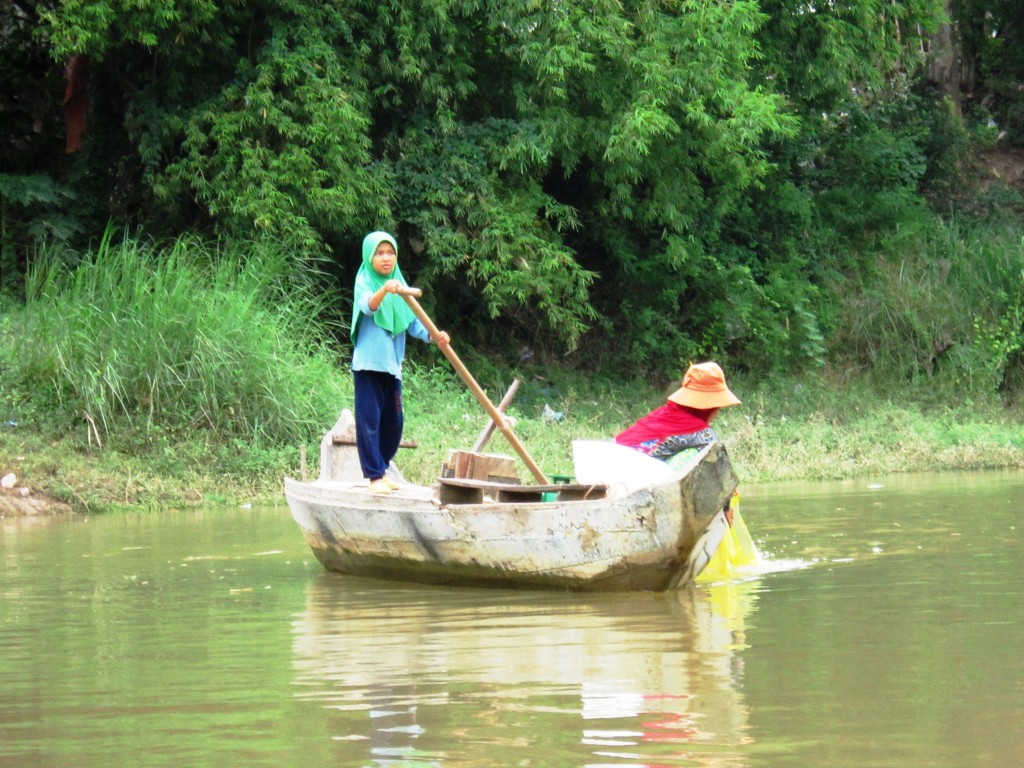 When in Battambang... By: Gabi Yetter

If you’re more interested in active, outdoor activities, there are several worth recommending.

While Battambang is known for its Bamboo Train (a large bamboo platform mounted on train axles powered by a small go-kart engine), we were unable to find it! We tried asking locals, following maps, inquiring at guesthouses and following our instincts but always ended up in the same section of town – and never found the train. It will soon be taken off the track since work is in progress to re-open the train line from Phnom Penh to the Thai border so nobody knows how much longer it will be around. If you go, it’s probably best to take a tuktuk so you don’t get lost.

We did, however, find the kayak location which provided us with one of the weekend’s best experiences. In true Cambodian style, the team at Green Orange Kayak (located seven kilometres south of town) handed over a kayak, a paddle and a laminated map of the river and waved us on our way. No guide. No lifejacket. No problem.

Children near the old train station of Battambang, By: Davidlohr Bueso

Even without the map, the most directionally-challenged would have no difficulty in finding their way since the Sangkar River heads only into Battambang from the up-river launch point, and the markers include “old bridge, old bridge, railway bridge, new bridge, new bridge” before you reach your destination, where two animated Cambodians wave you to the shore.

It’s a marvellous way to spend 2-3 hours seeing local scenery, drifting past villages and pagodas and experiencing the tranquillity of the region and the company is run by FEDA, a local NGO which provides free education for local schoolchildren so your money goes to a good cause.

If you’re keen on two wheel adventures, Soksabike is a social enterprise offering bicycle tours to areas where you’ll see traditional livelihoods of the Cambodian countryside as well as learn about the environment and local lifestyles. 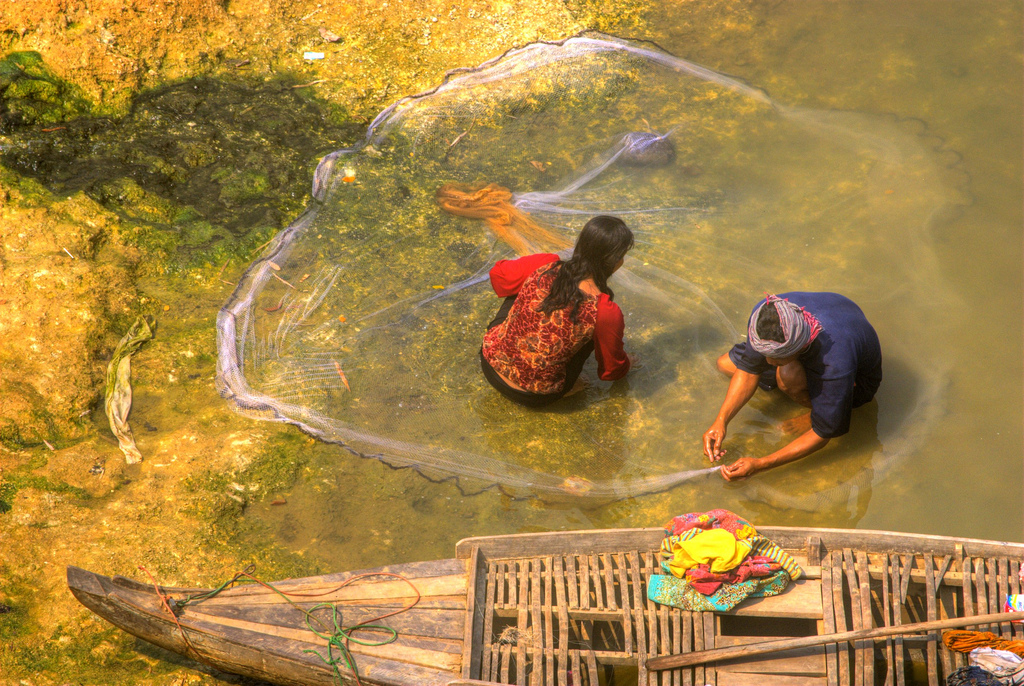 Fishing in Battambang, By: Adam Inglis

And, whichever route you take – be it for the culture, activity, environment or just relaxation – Battambang is a little town with something for everyone.

Things to do in Cambodia: