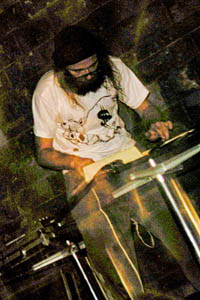 DJs these days have strayed far from the original scratches with 80s beats and hip hop intentions;they have even strayed far from the90s trance and dubstep. A DJ now is anything and everything, and Sebastien Lemonon, aka DJ Urine, is among the cluster of DJs having emerged from cocoons of pure originality. DJ Urine seems to have a plan for some percentage of his creation but prides himself on those instances when he doesn’t. He brings the term ‘experimental’ back to its roots in that every show he plays could potentially be pure experiment. The gig he played at Langgeng Art Foundation in Yogyakarta consisted of self-constructed vinyl saucers being strewn about and 100% pure improvisation. With a particular interest in gamelan, DJ Urine hopes to return to Jogja at the end of his tour to collaborate with some Sundawani musicians and a gamelan orchestra. He will be in Indonesia scratching and screeching for another month and a half, so be sure and catch him if you need that extra minty kick in your night life.

Here are some words exchanged between us as we sat in the hot upper gallery of LAF, sweating and in the dark:

MD: Have you collaborated with Indonesian musicians?

SL: Yeah, I collaborated with a band called Shoah from Jakarta in 2010. They are two people playing noise. I also met Sundawani people, the traditional music of the area, in Unisba in Bandung, playing gamelan, stuff like that.

MD: Do you ever use any traditional music in your music?

SL: I’m still mixing the tracks we recorded together- we have eleven tracks on the way, but I need to have a studio to finish it, because this is not laptop music. Gamelan needs to be mixed really well. 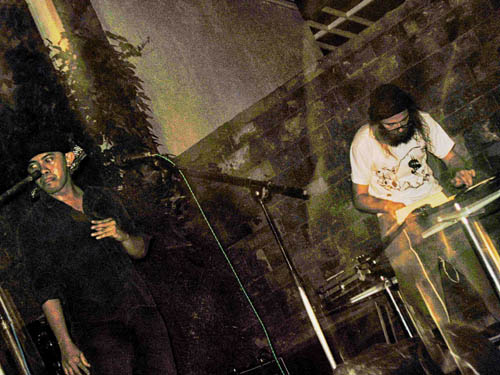 MD: I read that you make your own records. How and where do you do that?

SL: Yes this is old Balinese writing and it means ‘vinyl’. 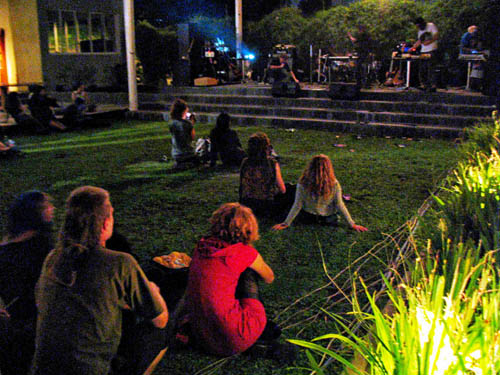 MD: Do you have a connection with Bali?

SL: It’s not my favorite place in Indonesia. ..a lot of tourists and stuff like that. And it’s really expensive. I met people in Singapore that were living in Bali though, and they helped me there with no money, so now I can go back there to play, because I know the people there.

Yeah so I make my vinyl, I customize my turntable, etc. I was starting with only one technique and then I found a Fischer Price turntable online for really cheap. I can maybe play without vinyl sometimes but I for sure cannot play my music without this kind of turntable, because this is plastic…

MD: Yes it’s a Fischer Price portable turntable…I’ve been wanting one for a long time.

SL: So I customized it. I can plug wires into it because it acts like a gigantic microphone.

MD: Would you say that it’s this machine that you can speak through the best?

SL: Yes definitely. I can stick it in my mouth…

SL: …yeah like a baby screaming, I can play guitar, I can use it as a microcontact,  I can play vinyl, because they are made for children they are resistant to everything, even water, even higher voltage, even if they start to smell burnt, if you unplug them they still work.

My new mission is to try to make a turntable from garbage, so that I can play everywhere. I want to play in some places you can’t play music. I really want to go to Palestine, but they will not let me in with an instrument, so the only way I can cross the border and play music there is to go without an instrument.

MD: Is the turntable considered an instrument??

SL: Yeah every time I cross the border I get questioned about it because it doesn’t look like a real turntable, it has wires everywhere because it’s customized. So my next goal is to make a turntable from nothing, like a fan or something like that.

SL: For me it’s good to bring people here, and to know there are good places here, and to know that there are audiences to listen to this kind of music, you can play Solo in front of 50 or 100 kids and people are happy. If they can’t give you money they put you in a nice place, they give you food, and for me this is the only good reason to make music. 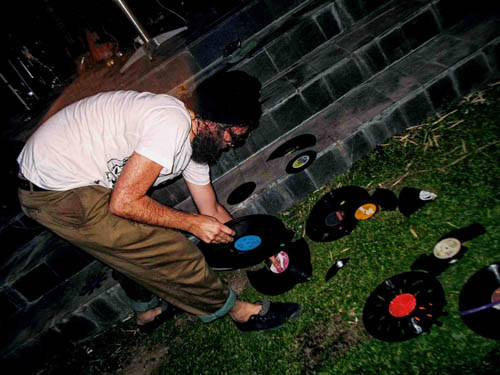 SL: Rully, who will play with us tonight is a really good traditional singer. There are a lot of good vibrations tonight.  I really love Indonesia the most out of all the other Asian countries I’ve visited. I have so many friends here now, when I go back I miss them a lot. Before I was going to the U.S. and playing a lot of shows, but now I just come here. If you work a little while you can play Bangkok, Singapore, other parts of Asia, and people want to hear this kind of stuff. I mean I’m poor. I don’t care about the money although I should, but when you play here it’s like you got your gift, you know? Yesterday we played Solo, we played the worst music like (makes static noise sound), and they came after the show and said ‘wow, it looks like mmwayung, etc.’ so we are making another way of doing it now. I love Sun Ra, but I don’t want to copy it. His music has influenced me a lot.

MD: And why the name DJ Urine? Where does that come from?

SL: Two things: one, because I think with a name like this people will probably think it’s a stupid name, so a stupid “way” to do/play/practice/work on music. . .
and also because ‘urine’ (in French) has other anagrams:

and all those names fit perfectly with my sounds 😀


MD: Who are your muses?

SL: I read a book by Antonin Artaud, The Theater and its Double, and it has influenced me the most. I started with one turntable, and I already know there are a lot of good scratchers, a lot of talent, but for me I was one turntable, one piece of iron, reading songs, turning, etc. I know other people do it too, it’s just that I don’t listen to them, so hopefully someday I can meet them and have a battle.

The book really influenced me, because you can read it like ‘music and its double’,’ the movie and its double’, etc. He took the occidental way to do theater and he compared it with the Asian way, the Arabic way to tell a story. So it’s like the original forgets everything that has been done before, so even though he has influenced me the most I try to be original. Mwayang also influenced me a lot, and DJ Qbert.

MD: But who is still your muse every day?

SL: There are so many. I mean I love the Locust a lot, even if we have different sounds. I think really the world is going mad, so I’m trying to make new stuff…a revolution, something like that.

MD: Maybe I can hear the world going mad through your music.