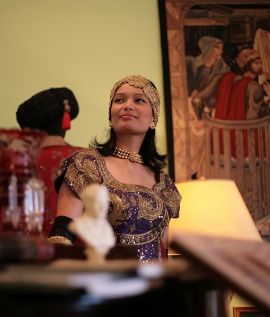 Under the patronage of Berlin’s Governing Mayor Klaus Wowereit and Jakarta’s Governor Fauzi Bowo, the Jakarta Berlin Arts Festival will be taking place from 25th June – 3rd July 2011. Since 1993, Jakarta and Berlin have been officially twinned cities, yet the contemporary culture of the Indonesian capital is relatively unknown in Germany. With this in mind, it will be being introduced for the first time to a wider audience with a wide range of contemporary art and cultural events across Berlin.

The festival program focuses on contemporary theatre, dance and music productions from the supermetropolis Jakarta (around 10 million inhabitants) and further includes feature films and documentaries as well as exhibitions and discussions.

During these events, many celebrated artists from Asia will be presenting their work at the festival for the first time in Europe. In addition, workshops and meetings with Indonesian and German writers and intellectuals are planned, working in collaboration with many renowned educational and cultural institutions in Berlin. Festival director Martin Jankowski will be collaborating with a high-profile board of Indonesian and German artists to curate the program.

The tropical archipelago Indonesia (240 million inhabitants) is now considered the third largest democracy in the world, and shows the results of an astonishing economic growth (6,5 %) and a dynamic civil society. Its cosmopolitan culture is influenced by over two hundred languages and diverse traditions which work together to enrich the art scene of one of the most multifarious capitals in the world.

The formal opening starts on the 25th June 2011 at 7 pm in Berlin’s Admiralspalast, the events will take place at various venues throughout the city.

For more information see: www.jakarta-berlin.de and you can order tickets at the website of Admiralspalast.

The full program of the Berlin Jakarta Arts festival promises us plenty of snacks, great events and art from every angle!