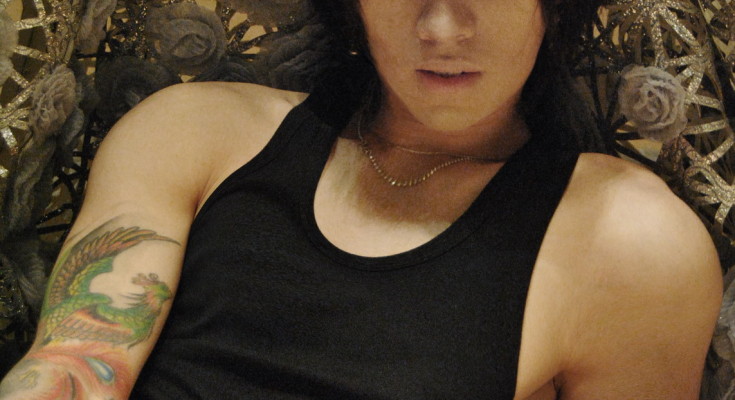 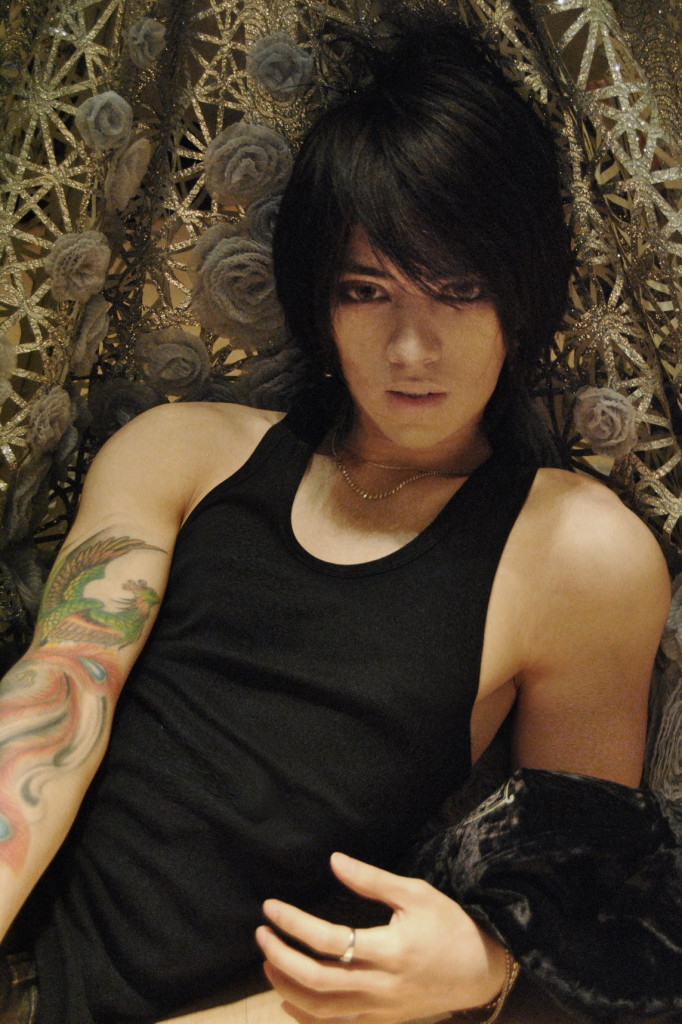 Indonesian fashion designer Tex Saverio set the stage during the 2010 Jakarta Fashion Week. His designs, reminiscent of Alaxander MC Queen’s avant garde, Valentino’s glamour and Galliano’s feel for drama didn’t go unnoticed. Pop icon Lady Gaga (the dream muze of many a designer), wrapped herself up in a dress by the young Jakarta designer for a photoshoot in Harper’s Bazaar magazine.

Saverio took the limelight for the first time in 2005 when he won the prestigious Mercedes-Benz Asia Fashion Award. The designer, now aged 26, quickly grew into a national style icon and was chosen to conclude the Jakarta Fashion Week. He did this in style with his collection ‘Glacon,’ inspired by the contradictory characteristics of ice, a seemingly light and delicate substance, that nevertheless feels strong and unbreakable. His runway show was met with a standing ovation.

His new collection is called Midas, named after the Greek king who turned everything he loved into gold. Including his food and his children. The pieces in the collection are golden…a tongue in cheek reference to Saverio’s capacity to turn fabric into gold?

Time for Latitudes.nu to interview the man about his work, his inspiration and his sense of style!

Have you always had a passion for fashion? What is it that interested you in the world of fashion and design in particular?

Yes of course, I’m not really sure why, though I just feel that I have so much passion for fashion. That’s what dragged me into fashion, deeper and stronger.

Saverio followed his passion for fashion by dropping out of school at the age of 18. He quit the elite Christian Senior High School No. I after one year of study to enter the BUNKA Fashion Academy.

What did you family and friends think when you chose to drop out of school and follow this path?

To my surprise they supported me, in the early 2000s, the fashion industry in Indonesia was not really that big, a career in fashion was not really as open as it is today. So it surprised me that my family supported me for something that was uncertain. This support that I experienced in turn made me think that I couldn’t let them down, I knew I had to work really hard and prove that their support was not a waste. 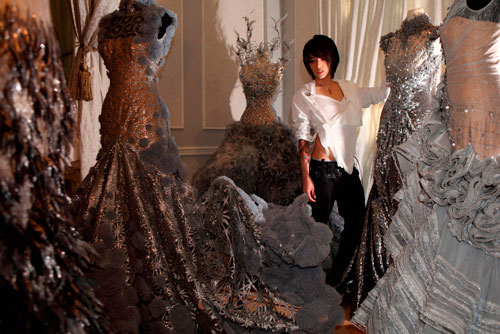 Tex Saverio between his dresses

Your collections show a very elaborate, dramatic and couture style, some call you the new Alexander McQueen. What do you think about that?

Yeah, it so flattering to know that people compare me to a legend as Alexander McQueen. But I think that is just too much praise. I’m a new designer, definitely not a match for a legend.  McQueen is incomparable. But being compared to McQueen is such a big motivation for me to push me harder and further…I adore Alexander McQueen.

To see why people make the connection between McQueen and Saverio, check out this video from the Dewi Fashion Night 2010:

Your designs will probably be seen more often on the runway than on the street. Does that in any way bother you? Have you ever considered making street wear?

Yes, I am very aware of that, my creations are hardly wearable in daily life or on the street. I think what I do on the runway is purely in the name of fashion and art. I just try to be honest with myself and show who I really am.  And I just hope that people will appreciate it.

It doesn’t bother me but yes, I’m going create a ready to wear line, actually there have been quite a lot of requests coming from in and outside Indonesia. 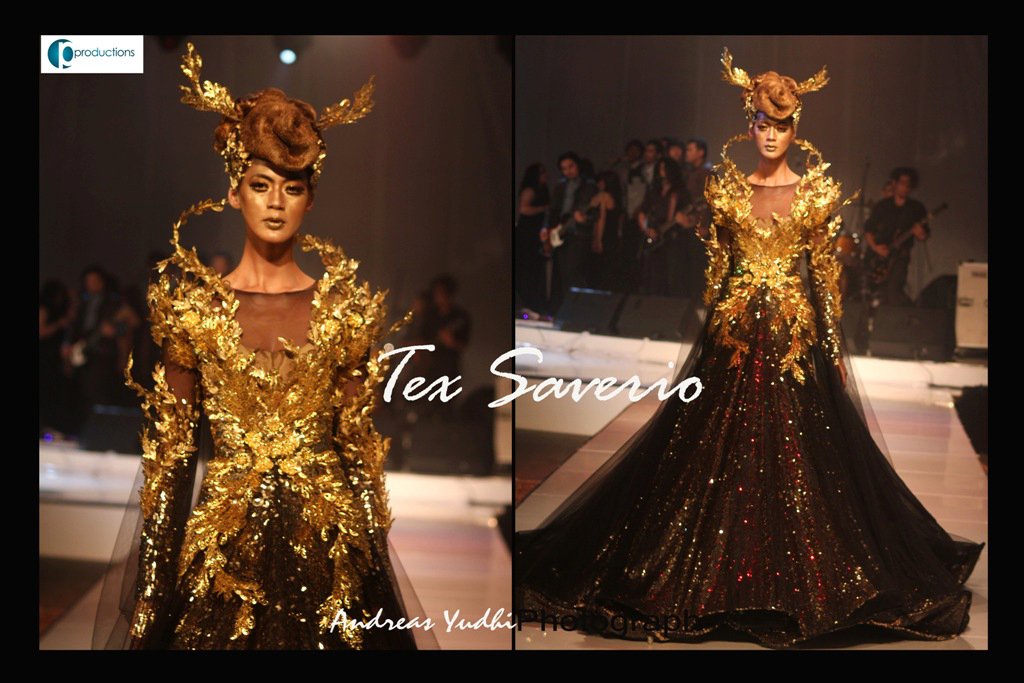 Is there anything specifically Indonesian to your designs? Or do you rather have your own unique perspective on fashion? Does culture influence fashion?

Yeah, I think it is more about the silhouette. As can be seen, most of my creations are quite covered, probably I am influenced by Eastern Culture. And yes, if I am asked about the influencing factor in fashion of course culture is one of them and it influences my works as well…

How do your designs reflect your personality?

The only thing related between my personality and my works is the perfectionism. Please  don’t take it wrong. I’m not saying that my works are perfect (it’s far from ‘perfect’) but my personality that always wants to create something flawless makes me work hardest and do my utmost best. The personality creates a passion that in the end affects my works. I believe that from everything you do with all your best, you will get the best results. 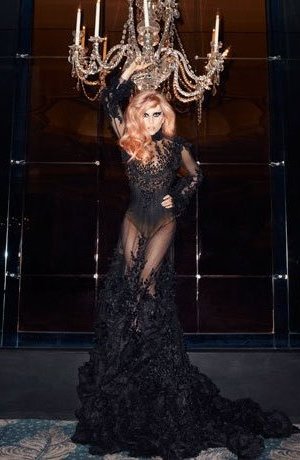 What do you like to wear yourself? What is your favorite outfit and why?

I wear whatever I want and I prefer more casual attire, an effortless look, I prefer people to look at my works rather than me. After all, I am a designer, not a celebrity.. 😉

Talking about celebrities, Lady Gaga played an important role in Tex Saverio’s life. After having sent 7 of his dresses of his previous collection ‘My Courtisane’ to lady Gaga, Saverio was over the moon when he found out she was wearing one of his creations in a feature in Harper’s Bazaar. Tex Saverio has definitely found the way to the world stage. Asked about his dream muse, the answer doesn’t come as a surprise.

If you could choose a muse, any era and anybody, who would it be and why?

Lady GaGa, she has it all.

How did Lady Gaga come to wear one of your creations and what did you think when that happened? Has it have any effect on your name and popularity worldwide?

First, I was so surprised, not only that finally Lady Gaga wore one of my creations, but also the impact it had. It had a huge impact, not only on me but on the Indonesian fashion industry, especially the new designers. The story of Lady Gaga is not only about me, it is about that nothing’s impossible and unreachable, it’s about the courage to do what you are blessed with and make the most out of it. As quoted by one of media, “THE DOOR HAS OPENED..”, this also means that we are living in an era where the phrase ‘the world is flat’ still rings true.