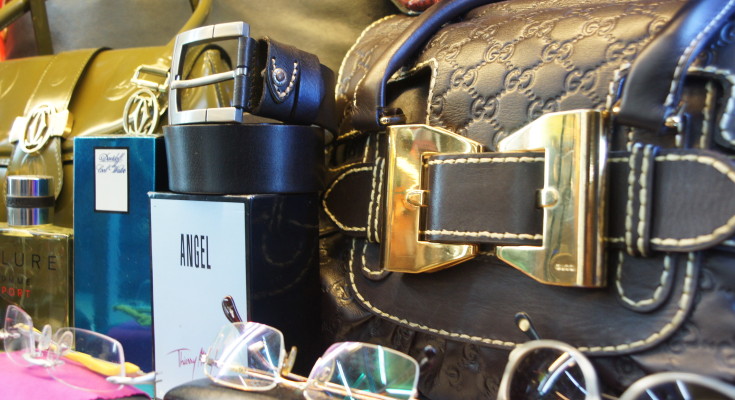 This article was originally published in Latitudes magazine, a renowned bi-monthly magazine focusing on Indonesian culture. The magazine hailing from the island of Bali previously existed in paper form and was especially known for its in-depth critical articles and beautiful photography. As a tribute to all contributors of this magazine Latitudes.nu presents a selection of articles published in the years 2001-2004. Prices mentioned in this article are therefore no longer accurate. As everywhere, also in Indonesia they have gone up.

Fake or Real? Sometimes it's hard to tell, By: Emma Kwee

This story starts with a friend of mine named Sari. Recently Sari received-or so she thought-an Adidas brand jacket as a gift from an uncle who had just returned from Singapore. The long, hooded jacket was cut from thick red and gray jersey cloth, adorned with the distinctive triangular Adidas logo. According to her uncle, the jacket had cost US$100. As Sari showed off her new prize, her friends gathered around in admiration. Suddenly, however, one of them blurted out, ‘Why are you so proud of a fake jacket?’ Sari retorted indignantly, ‘What are you talking about? This jacket was a gift from my uncle from Singapore!’ The friend laughed. ‘Oh yeah? Well try reading the writing on the back.’ Sari was mortified to realize that the jacket was market not ‘ADIDAS’ but ‘ADIADS.’

Sari’s story might be amusing, but it’s not unusual in Indonesia. Here an amazing variety of goods can be found in-more or less accurate-counterfeit form, from the latest computer software to just-released movies to trendy clothes, watches and shoes. Even food and drink and antibiotics are faked. And it goes without saying that counterfeit money is common. In fact, Indonesia regularly appears on the top ten list of countries with the biggest piracy problems.

Real leather? Must be real then, By: Emma Kwee

A trip to Jogjakarta’s Pasar Beringharjo offers ample evidence of this underground economy. This market has long been a famous center for traditional batik and handicrafts. These days, however, it is also a center for a range of fabulous fakes. Here one can find shoes that mimic well-known brands like Carvil, Etienne Aigner, Neckermann, Gucci and LA Gear, as well as Rodeo clothing, Nikon cameras and Play Station gaming hardware. But if you look closely, you’ll see that these goods are not exactly what they appear to be. The labels might look similar, but the names have been changed to Carwil, Estunne Aigner, Nechermann, L. Age Air, GUCI, Roddeo, Nilkon and Poly Station. The prices have been lowered to match. If Carvil brand shoes retail for Rp50,000-Rp80,000, Carwils go for a mere Rp12,000. Estunne Aigner or GUCI shoes are sold for just Rp28,500, compared to millions of rupiah for the real thing. Poly Station sells for Rp.135,000-less than a tenth of the price of a genuine Play Station. Tricks played by piraters include imitating a famous brand’s lettering style and changing the spelling, or else using the same spelling and changing the lettering style. In this way, manufacturers believe they can escape lawsuits while increasing the potential for deceiving unsuspecting buyers.

Surada, a counterfeit clothing merchant, explains that she buys many of her goods in Jakarta to resell in Jogjakarta. Her fake Adidas shorts, however, she gets from a clothing producer in Jepara for Rp7,000-8,000 a pair and then resells them for Rp8,500-9,000 per pair. She buys trousers at the wholesale price of Rp12,000 and then sells them at the market for Rp18,000. Each day, Surada can sell more than a dozen each of a whole range of items. She claims she takes in a profit of at least Rp50,000 a day.

Surada is aware that the goods she sells are fakes, but she says that doesn’t bother her-or many of her customers. ‘Yeah, the people who buy from me just want to get things cheap,’ she explains, ‘and I don’t really expect much of a profit.’ Surada says the competition from other vendors means that it’s difficult to set her prices very high. ‘It’s better to get a small profit margin but sell a lot. That way there are always buyers and business can run smoothly.’ Surada says that the easiest way to make money is by carrying fake Adidas items. Whether it’s Adidas made in Jepara or Adidas made in America is beside the point. What’s important is that without paying a fortune, one can still be stylish.