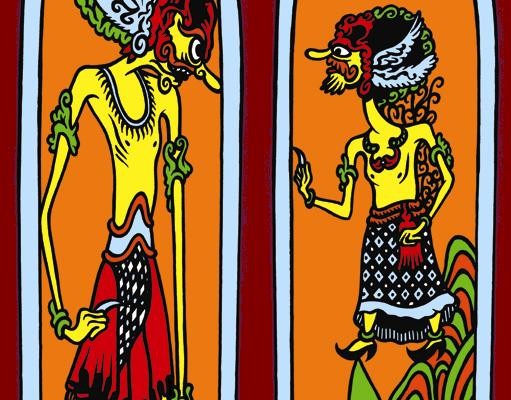 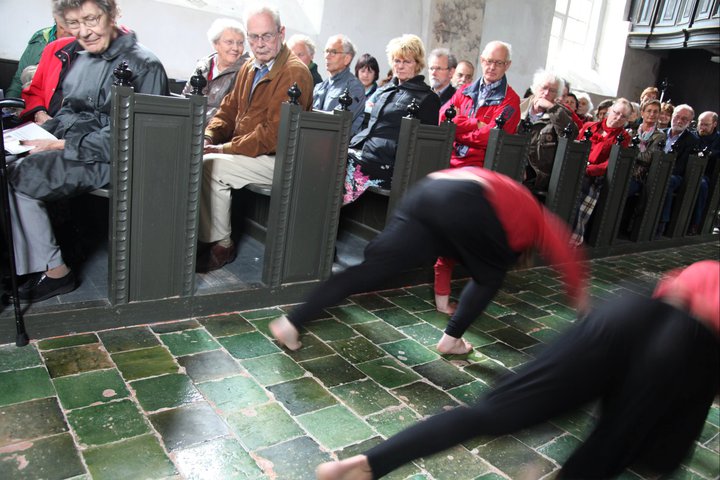 The scene: late May, at a 13th century church in a small rural village in the province of Groningen, the Netherlands. The project: a cross-cultural performance piece telling the legend of the Dewa Ruci. I caught up with the writer and brains behind the project, Sjoerd-Jeroen Moenandar to find out more.

How did the project come together?

‘Well, the project was part of the ‘Terug naar het begin’ Festival (Back to the Beginning Festival) and this year’s theme was Faith and Hope.  I thought this was perfect for a project about the Indonesian story of the Dewa Ruci, which is central to Javanese spiritual thought.’

Sjoerd-Jeroen is the founder of the group Hora Est which mixes cultures and art forms together to celebrate creation and diversity. For this project, ‘Horen zonder oren, zien zonder ogen’ (Hearing without ears, seeing without eyes) the Indonesian elements of poetry, art and gamelan were fused with American country music and Brazilian capoeira dancing. Take a look at this video made by Thessa Lageman to see some of this cross-cultural performance:

The idea behind the capoeira dancers was to represent the traditional storytelling of Indonesian shadow puppets with an interesting new aesthetic. It was also an alternative to doing what the Indonesians can do better as Sjoerd-Jeroen told me! Also the philosophy of the capoeira tradition fitted well with the idea of the guru tradition in Indonesian myth. 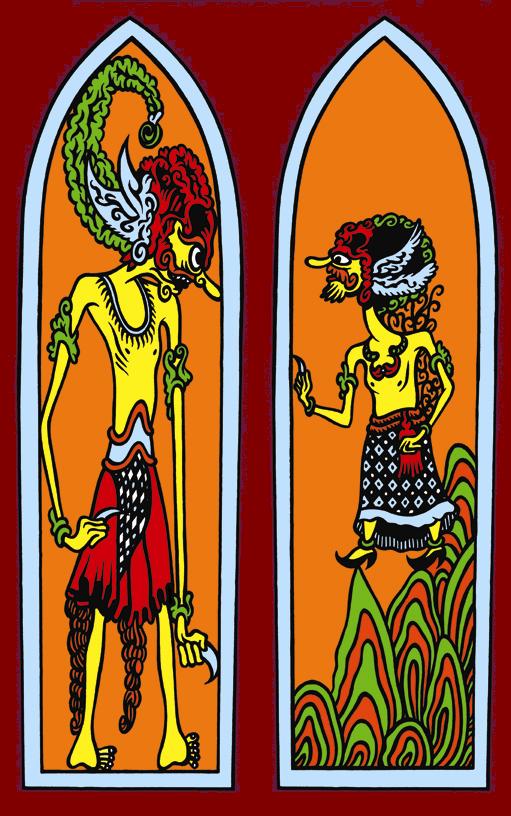 Musical director Kristin Mcgee initially suggested doing a project using country music and Sjoerd-Jeroen thought this would be a striking combination with gamelan instruments because the nasal singing style of female country singers would emulate the female singers in shadow plays who comment on the story as it unfolds. The Berimbau, a percussive string instrument from capoeira played by the dancers’ master, was added to tie the dancing and music together.

The storyteller/poet in the performance replicated the ‘dalang’ in shadow plays who controls the puppets and vocalizes their characters. Sjoerd-Jeroen wrote the script for the project in Dutch, using a Javanese rhyme scheme which has a speech like flow, but also stylized poetical elements. A local ‘beat’ poet, Egbert Hovenkamp II, brought the characters to life in imitation of the ‘dalang’ by using different sounds and voices to signify the two characters of Bhima and the Dewa Ruci.

The costumes, inspired by traditional Indonesian dress, incorporated a color scheme taken from the text and middle eastern head scarves. Sjoerd-Jeroen says that the purpose of this was to avoid patronizing Indonesian culture by having ‘orang puli’ (foreigners) wearing full traditional dress. The artwork depicts traditional images of Bhima and the Dewa Ruci which were hung over the church windows and augmented by a cartoonist who was commissioned especially for the project.

Why did you choose this particular myth?

‘Well, firstly it is always nice to do something which has a connection with your roots and family and also it was a favorite story of mine that I had wanted to use for a long time. The story originates from the Hindu tradition in India and like McDonalds combining local food with American fast food, the story was combined with Muslim and Javanese religious beliefs. The spiritual beliefs in particular are a Javanese addition to the original Mahabharata story of Bhima and this is what I find more interesting about this story than others, such as the Bhagavata. The part we used in the performance is only short in the shadow plays, but includes the main philosophical element. It introduces the idea of man and god as tripartite: god outside man, god within man and god as an active mediating force which can be represented by a prophet, but is here personalized in  the Dewa Ruci. This is interesting in its humanist aspect as it is less like institutionalized religious belief. The idea that god and man overlap is also very philosophical. 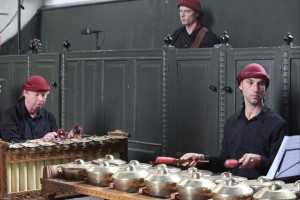 ‘Hora Est has always been about mixing cultures which I like to do in cooking too! In the past we have used Muslim elements and stories as I have a deep fondness and also a blood connection to them. I’ve always thought it is more interesting to be a mix than to be pure. Using art to express this is more interesting to me than writing an essay.’

The future of the project may be in the form of a further performance in Groningen with Indonesian food and other cultural performances, and possibly taking it to the Yogyakarta gamelan festival: so watch this space….

A booklet with text and a CD of the event is available from the Hora Est website which also has more info on the Dewa Ruci and details of past projects.