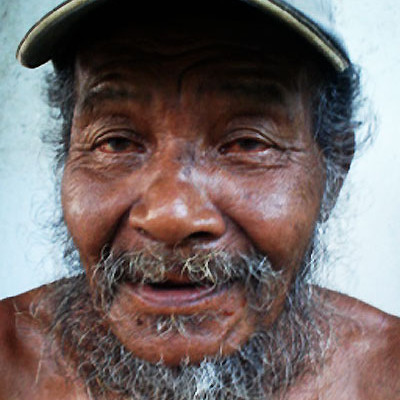 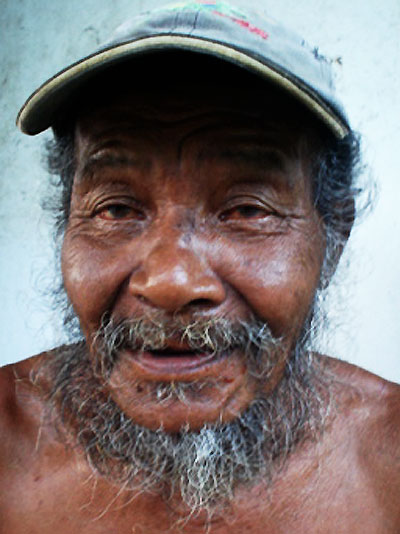 Sibin Aus (also known as Sudin), resident shaman or dukun of Kampung Pertak (a Temuan village located 44 miles northeast of Kuala Lumpur in Ulu Selangor) died in his sleep on 9 January 2011. His sister-in-law found him lifeless around noon. When I said goodbye to him around 2:30pm his body was still warm.

My guess is that Sibin was around 79. He told me he had served with the Royal Malaysian Police during the Emergency period, which means he must have turned 18 in 1950 or thereabouts.

Sibin was one of the most enigmatic Temuan elders I have had the honor of befriending. One by one they have balik pulau (returned to the Isle of Fruits or paradise) since I relocated to the area in early 1992. When I first met him Sibin was living with a medicine woman named Awa Anak Lahai. She threw him out eleven years ago and hasn’t spoken to him since.

Sibin was a bit wayward but quite harmless. The kids enjoyed teasing him whenever he was intoxicated (and he invariably was). He always took it good-naturedly, even when they called him Berk’ot (smelly and unwashed) to his face. After his old lady threw him out, Sibin sometimes appeared at my window in the wee hours, singing sad songs in his distinctive raspy voice. I would invite him in and make him a cup of coffee. But after half an hour he would start singing his drunken lament all over again and I would have to physically throw him out so he wouldn’t wake everybody up.

Wading Unsteadily across a Rocky Stream

In the last ten years I have watched Sibin’s health deteriorate to the extent that more than a few times I believed he was already a goner. Once, about five years ago, I was sitting by the river when I spotted him wading unsteadily across the rocky stream. He collapsed midway through and landed face down in the fast-flowing but shallow water. I rushed over to haul him to the opposite bank where I propped him against a rock.

“I can see my dear mother,” Sibin muttered, as if in a visionary trance. “Yes, yes, I’ll soon be joining her…” and I noticed a glazed look on his face, eyes focused on some distant horizon. “Don’t budge from here,” I admonished, and went off in search of help. A couple of villagers came down to the river to assist Sibin. He managed to get back on his wobbly feet… and then he trudged off into the forest.

No sign of him for a couple of weeks… and then Sibin would be spotted merrily bouncing along the road, looking ten years younger and glowing with vitality. I guess he did have some ilmu (magical knowledge) and knew how to rejuvenate himself and repair his alcohol-ravaged liver.

Whenever I bumped into him, I would wave and he’d come over and say, “I shake hand you!” We were actually quite fond of each other, in a comradely sort of way. After all, Sibin was among the Temuan elders who readily accepted me as a friend and colleague right from the outset. His younger brother Rasid subsequently became my stepfather-in-law.

In the early years when I was in the habit of constantly asking questions about Temuan folklore and terminology, Sibin proved an invaluable resource, though I never knew when he was serious and when he was merely pulling my leg.

With Sibin’s Passing, an Era of Childlike Innocence & Indigenous Wisdom has Ended

The present crop of Temuan males are so vastly different from their grandparents’ or even their parents’ generation. Growing up watching brain-deadening TV programs piped in from the urban capital, these kids I first befriended when they were in their early teens have since grown into sullen, surly, resentful, unfriendly and xenophobic adults – no thanks to the constant indoctrination and official propaganda they are subjected to by the Jabatan Hal Ehwal Orang Asli (Orang Asli Affairs Department) who are past masters of divide-and-rule management strategies. 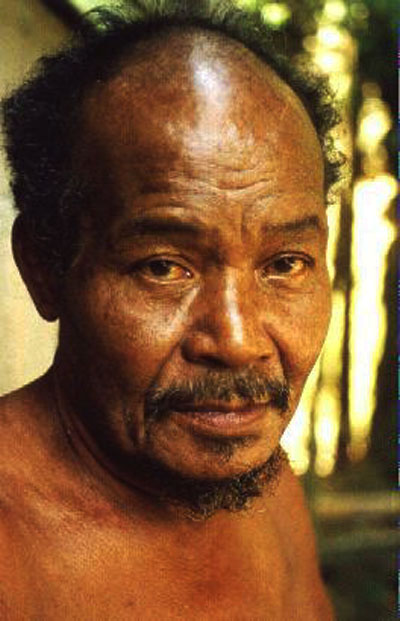 Alcohol abuse has become far more serious ever since one of the villagers decided to start selling cigarettes and cheap spirits from home. In the old days, when they had finished all the booze, they had to ride 8 miles to Kuala Kubu Bharu to obtain another round of drinks. Now they only have to stagger a hundred yards down the road. For RM10 they can get at least three bottles of rotgut.

After a few rounds they seem to get possessed by demons and begin to brawl amongst themselves. They literally turn into Orcs, making a huge racket on their motorbikes, setting off cherry bombs and, even worse, hurling empty bottles into the river so they will smash on the rocks and pose a serious hazard to others. Some have become so demented they routinely poison cats and murder dogs that chase after their motorbikes. Anyone who can kill a cat or dog in cold blood is perfectly capable of killing another human being… it’s absolutely tragic.

In a way, what has happened in Kampung Pertak over the last 20 years pretty much reflects what has happened to the rest of the country. It’s almost exactly like what happens to Underland when the Red Queen seizes power in Tim Burton’s Alice in Wonderland.