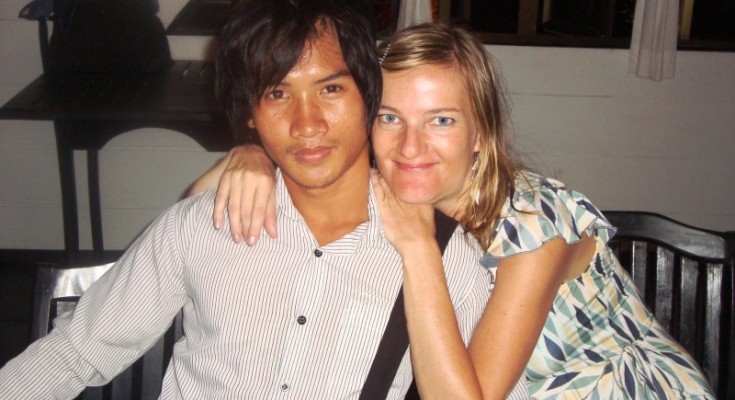 Yes, it’s time to meet yet another cross-cultural couple! Feel free to meet the other couples featured in this series. If you are in a mixed relationship and want to be part of this series, please e-mail info@latitudes.nu.

This time we travel to Cambodia, where Rithy (Khmer) and Sylvia (German) started an innocent holiday flirt, that evolved into a full fling relationship. The couple now live in Germany and have a 7 month old son named Phiron. 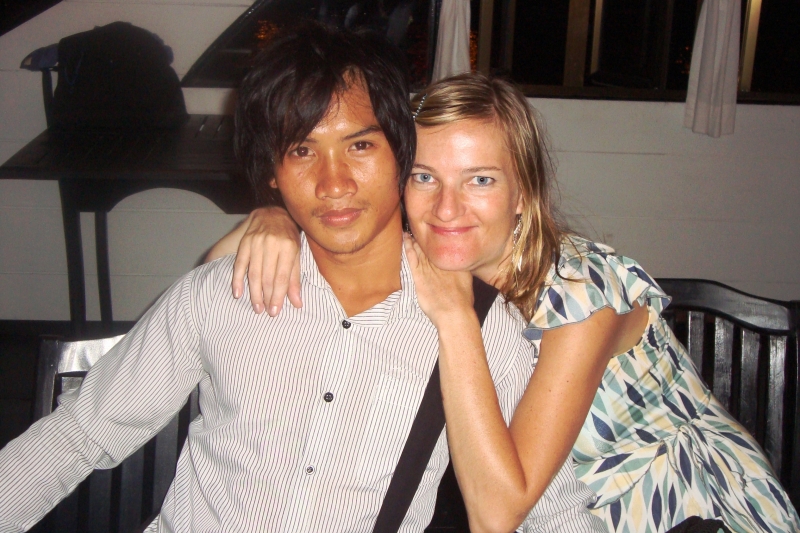 Please introduce yourselves, where are you from and where do you live?

‘We, Rithy (Khmer) and Sylvia (German) lived  in Cambodia together for 18 months, before we moved to Germany to deliver our new family member Phiron (7 months old).  Since March 2011, we live in the Southeast of Germany and have not yet fixed plans for the future.’

How did you meet and where?
‘We met in Banlung in Ratanakiri province in the North of Cambodia. Sylvia was an English teacher in Phnom Penh at the time and travelled in her end of term holidays to the northern province to explore waterfalls, crystal clear lakes and tribal villages. One day she was supposed to be picked up from a guesthouse by a driver and waited for him for more than one hour, surrounded by about 10 drivers like mosquitoes around a light bulb who were advertising their guesthouses or just staring at her.

Exhausted after a 15 hour bus ride, dusty from the red Ratanakiri soil and encouraged by a can of Angkor Beer, she finally called the driver again and noticed that the telephone rang in the pocket of the guy right next to her. So Sylvia’s first question to Rithy was: “I’m not calling you right now, am I?”

‘It started as a holiday flirt, passed the steps of a telephone romance, then a long-distance-relationship when Rithy worked as a gold miner in Mondulkiri province, followed by sharing an apartment in Phnom Penh. Now we are proud parents of a sweet little boy called Phiron, named for the long awaited rain after the dry season.’

‘The many examples to tell would be enough to fill a book. Some of these experiences are surprising, for example Rithy wondering about the silent, empty streets in Germany on a Tuesday morning when normal Germans are working. Or they are funny and make us laugh, like the fact that it is rude for Germans to pick your nose in public while Khmer people do this constantly and thoroughly, but for a Khmer it is against all common courtesy to blow your nose in a tissue or handkerchief.’

Because we love spicy food – causing runny noses – this conflict had to be sorted out.”

‘Less amusing is our completely different understanding of time that causes many forgotten appointments and delays – and by the way Germans are famous for being right on time. Even more difficult is the fact that Germans go back to nature by breastfeeding while many Cambodians are proud when they can afford instant milk.’

‘The biggest shock Rithy had to overcome was when we spent holidays with friends at a farmstay without electricity and flowing water – which means poverty in his country – instead of staying at a nice comfortable guesthouse. I had to remove candles from our apartment for the same reason. Soon it is Christmas, and Sylvia doesn’t know yet how this will work without candle light….’ 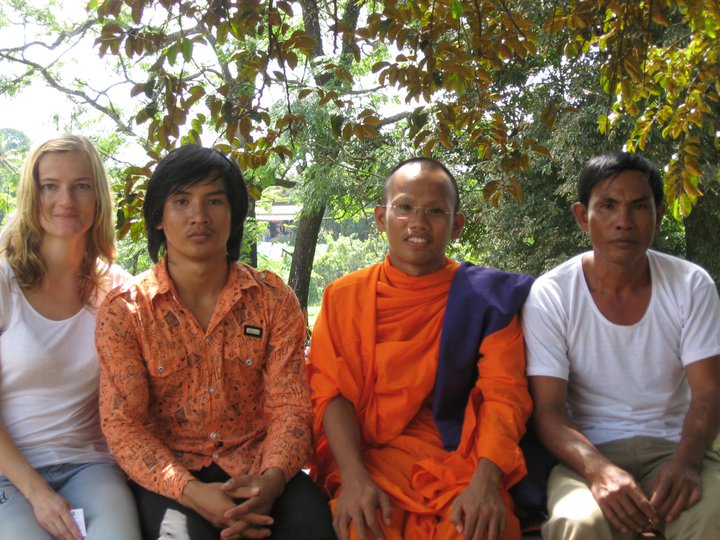 How did your surroundings (families, friends, culture) react to your mixed relationship?

‘Friends without exception were very positive and interested. Sylvia’s parents as typical Germans were skeptical at first but had the chance to meet Rithy in Cambodia when they visited one year ago. They immediately let him into their hearts and accepted our love as something serious. My grandmother denied his existence until the baby was born which softened her, but my elder sister is still full of prejudices and unwanted “good” advice.’

‘Rithy’s father thought his relationship to a foreigner may be a game but welcomed Sylvia with friendly restraint. Now he seems quite relieved his son has a chance for a better life. Rithy’s younger brother, a monk called Luy (that means Money) calls Sylvia ‘big sister’ since we’ve met as a sign of acceptance and positive attitude.’

‘It is almost an obligation for a European man to be an additional midwife, but in Cambodia it is women’s business to deliver and take care of a baby. So all grandmothers, aunties, cousins and sisters help the mother, while the father drinks with the men  and finally presents the newborn.  It was the greatest sign of love that Rithy shared the experience of birth and did exactly the right thing at the right time. All other challenges we can sum up under the term Cambodian corruption meets German bureaucracy. We’ve finally been successful in dealing with both, but it was a long way.’ 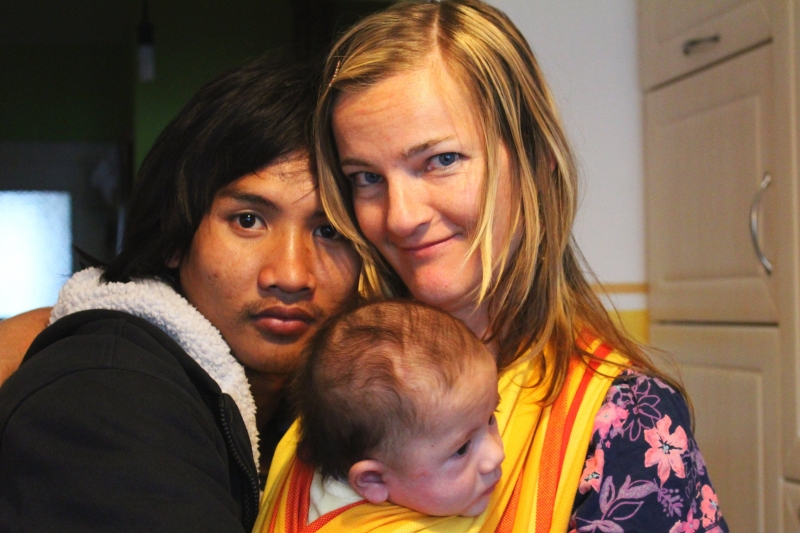 Sylvia and Rithy with Phiron

‘We complete each other quite perfectly. Sylvia is outgoing, well organized and empathetic, Rithy is very creative, quiet, a great cook and host. In common we have open minds, humor, caring love and our ability for reflection and forgiveness, which help a lot in finding each other after an argument.’ 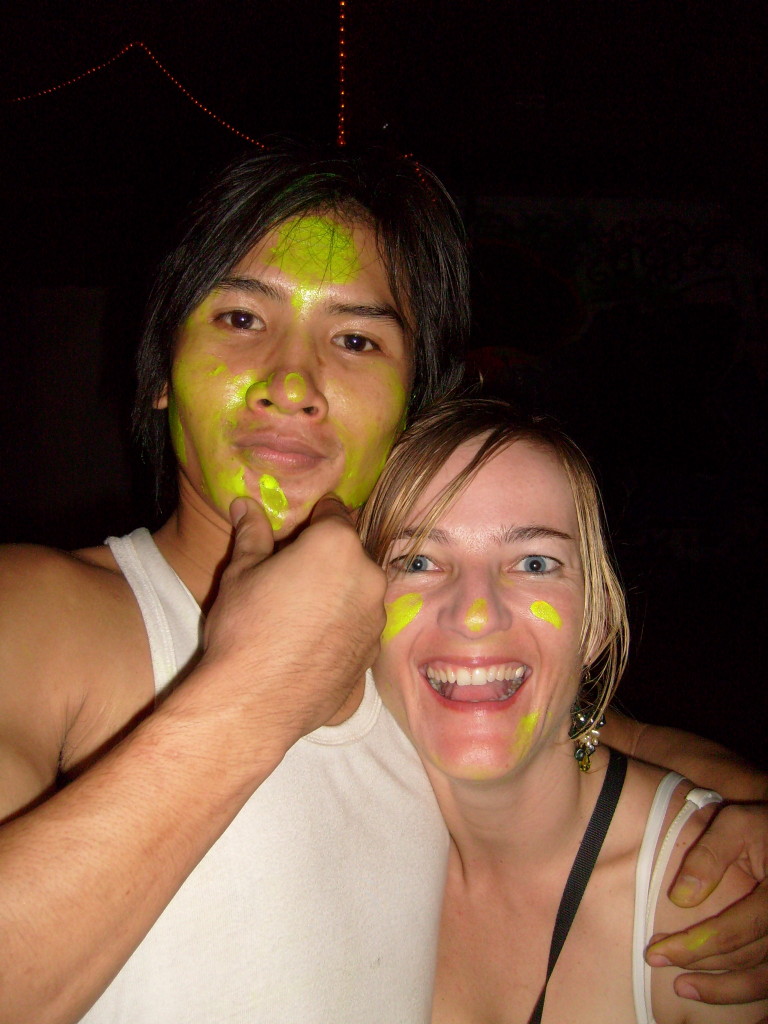 ‘Sylvia’s Khmer is rather poor, Rithy is just studying German fulltime at a language school to become better. Therefore we mainly communicate in English. Phiron is supposed to grow up with all three languages. Together we actually speak 6 different languages: Khmer, German, English, Russian, Lao and Tomphuon that is spoken by the tribal people in northern Cambodia.’

‘Watching the movie “The Passion of Jesus Christ” we actually noticed there are a lot of differences between the two religions we have grown up with. But practically there haven’t been any problems in religious matters between a former Christian and a former Buddhist monk.  As I already mentioned, we are quite open minded and tolerant.’

‘We plan to open an Adventure Camp in rural northern Cambodia on the border of Laos one day. It will be the perfect sum of our skills, personalities, experiences, backgrounds and knowledge.’

‘If the intercultural differences seem to get too much in the foreground, we try to step out of our relationship and see it with the eyes of someone neutral who is not involved. This always helps us to see how special and valuable our love is.’