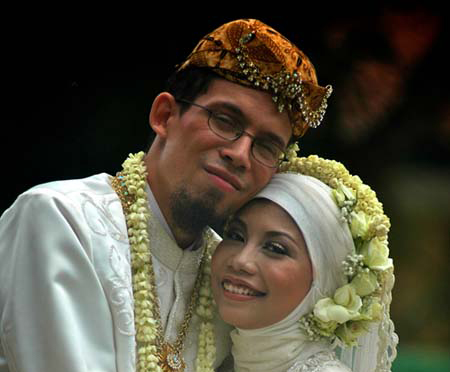 As far as Cross-Cultural-Couples go Nicolas and Nina tick every box. Nicolas is a Parisian of Benin-French extraction and Muslim convert while Nina is a native of Bengkulu, South Sumatra. They ‘met’ 4 years ago on the World Wide Web and have recently tied the knot and have since been blessed with an adorable baby girl. This is their story.

Please introduce yourselves, what are your names, where are you from and where do you live?

Nina: We met on a pen pal site called interpals around 2008. Nicolas was looking for his Indonesian friend when suddenly he fell into my profile. We wrote each other for some time but nothing was special between us at that time. Afterwards we lost contact because Nicolas erased his account on interpals, until suddenly we met again on Facebook.

Nicolas: It’s not suddenly, she was actually looking for me 😛 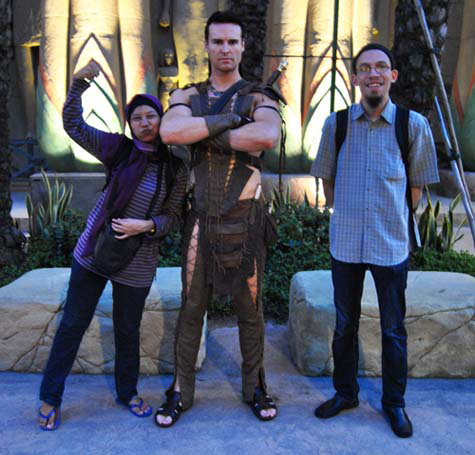 Nina : On April 2010, I just broke up with my ex boyfriend when suddenly I thought of Nicolas to speak about it and somehow I felt very comfortable speaking to him. Few days after intensive chatting, we officially became couples on Yahoo Messenger, and already spoke about getting married because both of us were not looking for a simple relationship. I know, it was something crazy as we never even met each other before and we were thousands of miles apart, but my heart said “Ok, he’s going to be my future husband.” Nicolas decided to make a visit to Indonesia on August 2010 to meet me and my parents, and also to celebrate Ramadhan and Ied together. As we planned to get married soon, we also spoke about the details such as what we must prepare, where to live, etc.

My parents, family, and friends were quite shocked and surprised to know that I was going to marry to a foreigner I knew only from internet. They thought I was completely crazy. My parents of course were very shocked, especially my mother. But later I was very surprised to know that when Nicolas asked my parents’ permission to marry me, my father – who is quite strict and conservative- directly said okay without hesitating.

Knowing that my parents were okay, Nicolas decided not to take his plane back to France and stayed with me in Bengkulu while waiting for all the wedding preparations. On January 9, 2011, we got married in a mosque near my parents’ home in Depok, Indonesia. Our wedding was as perfect as what we wanted to. Simple but memorable. Nicolas decided to stay in Indonesia because I couldn’t leave my job for some time and as moslems, Nicolas thinks it’s much much better to stay in Indonesia than in France. Until now, Nicolas has never flown back to France and on March 22, 2012 our beautiful baby girl was born. We named her Aisya Odibula Keke Adjignon. 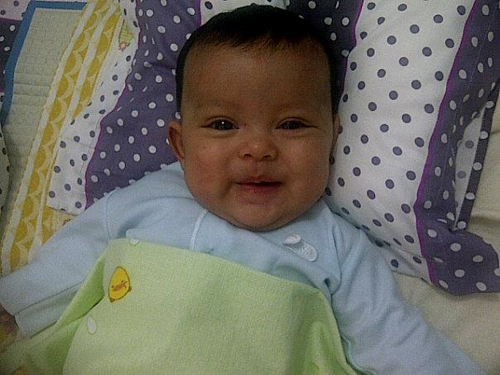 Nicolas: Odibula means “don’t be afraid” in African, as my father in law is a mix of French and Benin, West Africa. So somehow my baby girl is a mix of Asian, European, and African descent.

Nina: Somehow I think these two different cultures have made my life even more colorful! Although there are times that I’m surprised by his habits and so on, but to be honest, it makes me happy because I learn something new. In my opinion, Nicolas made a quite rapid adaptation to Indonesian habits. For example, he now prefers to wear a sarong at home rather than jeans or trousers. Nicolas has almost no problems with Indonesian food, although he really cant stand chili and spicy foods. So I cook neutral Indonesian food and sometimes I do my best to cook an international menu as it is so difficult to find western food in Bengkulu.

Nicolas: Actually, it can sometimes bring misunderstandings but we both are conscious enough about this point to overcome this with no sweat, or almost anyway lol.  I must say that even if some habits here in Indonesia may sometimes puzzle me, I’m still amazed by their sharing and solidarity spirit. And also by their religious tolerance that, as surprising as it may sound, I don’t find so much in Paris!

Nicolas: Hahaha, yes and sometimes Nina’s accent make me misunderstand too. For exemple she says “beg” for “bag”. It took some time for me to adapt. 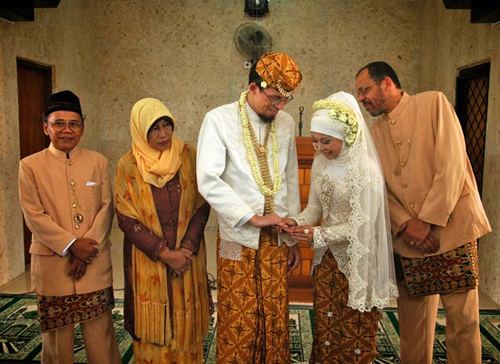 With both parents on our wedding

Nina: There are not many foreigners living in Bengkulu and so far I haven’t known any mixed couples who live here, so somehow I could say that Nicolas has become a “celebrity” in this city.  Everyone knows him and calls him “Mister”. One other funny thing is that almost everyone thought he is Arabic because his physical appearance is more similar to a Middle Eastern person than a European. So I often get the question “Is he Arabic?’. I guess many Indonesians have the stereotype of Europeans as someone with blonde hair and blue eyes.

Nicolas: Actually , I found the neighbourhood very friendly and helping. I don’t yet speak great Indonesian so sometimes it’s a bit hard to speak but all in all, everything went great. The only point that makes me sometimes grumble is that people here are much more “intrusive” in your life than in France. But well, I know that no harm is intended and that it’s just normal here so I keep patient with this and try to adapt.

Nina: Nicolas stays in Indonesia with a kind of “Following Wife” visa which does not allow him to work here. So now, we change positions. I’m a working mother, while he’s a stay-at-home husband and father. As we don’t have any choice for now, we try our best to enjoy it to the fullest. But of course this condition invites so many questions and comments. First it was quite disturbing, but now I dont really care about what people say. It’s not easy sometimes, especially that now we have a baby. But it won’t last forever Insya Allah.

Nicolas: Definetely, WORK. And also now, our baby. Well, at least, we know that it’s temporary and that we must just be patient.

Just like any other married couple, we feel complete. The best years of our lives.

Nina: English is the main language we speak. But now we mix also with Indonesian and I start to learn French because I want to be able to speak French with my husband’s family. Now that we have a daughter, I speak to her most of the time in Indonesian, while my husband speaks Indonesian, French, and English to her.

Nina: No, never, because we both are moslem. Nicolas decided to become moslem around early 2009 by his own will, not because he wanted to marry me because at that time we were not in a relationship yet. When we first met on interpals, I remember he already told me that even though he was not officially into one religion, he already had interest in Islam. And on January 2009, he told me that he already became moslem. I can say that he practices Islam much much better than me, that is why he doesn’t want to go back to France because he really enjoys practicing Islam in a country where the majority are moslems.

Nicolas: I would add furthermore that France is NOT a country for religious people, sadly. As soon as you’re practicing seriously, you somehow get harrassed at work etc or labelled an extremist, whatever your belief is even, and being muslim is considered worse lol.

Nina: I’m planning to quit my job as soon as I could so that I could spend most of my time with my baby girl, and maybe mounting our own business. Hope that my husband soon be able to have working permit as the new regulation of immigration is applied.

Nicolas: Passing a grade for being french teacher, many side-projects regarding creative things (writing, video etc..) and spending the rest of my life with a wonderfully caring and understanding wife! And of course, do my best to raise my daughter the right way.

Nina: Enjoy every culture shock that may appear. Marriage is never really easy, even if you come from the same culture, but any difference that appears will truly colour your life.

Nicolas: Stick with what you see as a positive and leave the negative points in a trash can after speaking about it if it is necessary.