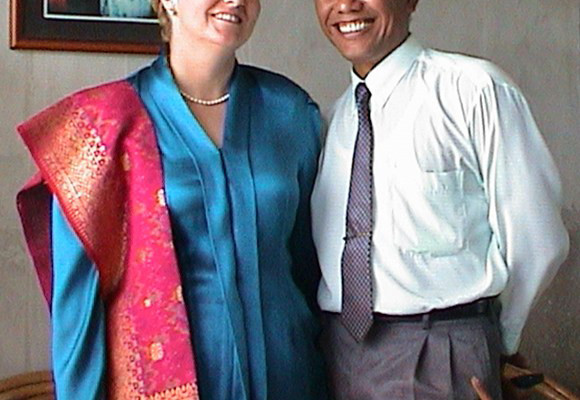 True love surpasses all boundaries they say…love songs talk about climbing the highest mountains, swimming the deepest oceans, crossing deserts without water and overcoming many other hardships. Obstacles that conjure up a very romantic, if slightly less realistic picture of love.

But there are couples that have to overcome many obstacles to stay together. Cross-cultural couples often don’t only have to deal with geographical distances but also with cultural differences. They meet many challenges along the way, parents or families that disapprove of the relationship, bureaucratic rules and visa regulations, and of course religious and cultural perspectives that may lead to misunderstandings. Being in a cross-cultural relationship requires a will to understand your significant other and his or her cultural context, dedication and conviction from either partner and most of all, a lot of patience… 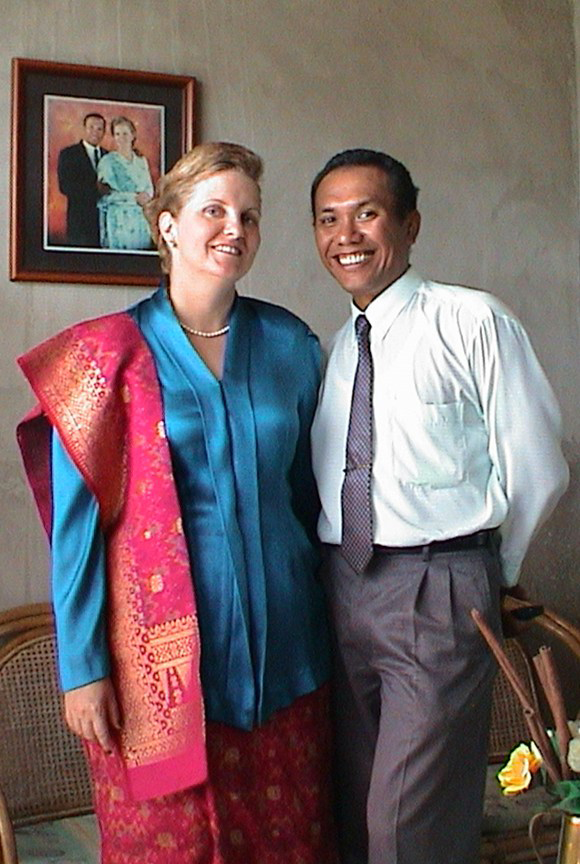 Michele and Kim at home in Pontianak

This new series celebrates love that overcomes these boundaries and obstacles. Over the past few months we have interviewed cross-cultural couples from Asia that have settled all over the world. We asked them how they met, how their relationship developed and what challenges they had to overcome along the way. This week, we start with Kim and Michele, a couple that currently resides in Pontianak West Kalimantan. Kim is from Indonesia, born in Aceh and Michele is from Vancouver Canada.

Eli Hakim Silaban, in short Kim, was raised in Medan on the island of Sumatra and moved to Pontianak in 1986 to study law. Michele arrived in Indonesia for the first time in 1994 and in 2009 adopted the Indonesian nationality. Their paths first crossed in a coffee shop on the campus of the University of Tanjungpura Pontianak. Michele had taken a year off work to travel. She didn’t realize she would never leave as she fell in love with Kim at first sight.

When and why did you come to Indonesia?

Michele: I arrived in Jakarta, Indonesia in November, 1994. From the moment I stepped off the airplane, I knew this was the place for me. I felt that anything I could contribute would be an improvement. I was 28 years old and looking for a new direction in life. I had just broken off with my boyfriend in Canada who was fairly wealthy and quite jaded. I was sure that I would never marry a rich man. Actually, I thought that I would never marry. I had a one year open return plane ticket and wanted see the other side of the world. I travelled around Java island for two weeks before heading off to Borneo where I was to look up friends of my friend in Canada. As soon as I arrived I was picked up by car and never had to stay in a hotel or hostel again. Everyone wanted me to stay with them. They were all impressed that I loved their food and was curious about their lives. Then I fell in love with Kim. 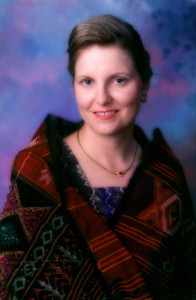 How did you meet and how did your relationship evolve?

Michele: I ended up staying with the state university rector and his family on campus. I would have my lunch at a little coffee shop down the road and play chess. Kim was there one day and was helping to translate my answers for one of the students who wanted to get to know me. Kim was the first person I had met since my arrival in Indonesia who knew English but didn’t want to approach me directly so I got up and introduced myself. For me it was love at first sight but I didn’t want to fall in love with just anyone so I watched him carefully for the next few weeks. I noticed that he was the kind of person whose friends would turn to for advice. That was it for me. We started hanging out with his friends in the evenings. After a couple of months I asked him to marry me. He laughed and asked me why. He was a university drop out who had been working at a coffee shop downtown. As far as he was concerned, he could offer me nothing. I, on the other hand, saw that as a private English teacher, I could work just a few hours a week and make more than enough to support the both of us while Kim realized his dream of returning to university to become a lawyer.

After a couple of months I asked him to marry me. He laughed and asked me why”. 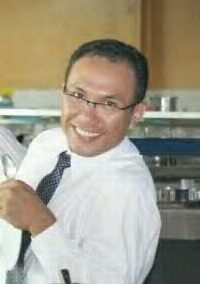 Kim, now a lawyer, was still studying when he met Michele

By the end of August they were on a cargo ship sleeping in the wheel house on their way to Jakarta. The couple stayed at Kim’s Auntie’s house. Kim’s mother came down from Medan on Sumatera Island to arrange the wedding. It was a short service with only Kim’s immediate family and 2 guests present. Although Kim is ethnically Batak, his mother was of the opinion that if customs and traditions were too heavy that they should be set aside. Michele tells us: “My mother was not sure about her decision to marry and really left it in my hands and wished me the best. She wasn’t able to make it to the wedding but she did come to stay with us about a year after we were married. It was then that she realized that Kim was wonderful and so was Indonesia.”

Their marriage wasn’t without any hardship. Poverty took its toll on Michele. Kim says: We started our marriage with very little money which set the tone for the rest of our lives together. The biggest challenge for Michele, was starting with very little. In the first 6 months of marriage we were so poor that Michele fainted from hunger 3 times.

By now Kim and Michele have a solid relationship. To be in a relationship of two different cultures for them means that they are able to take the best of both cultures and enjoy them. 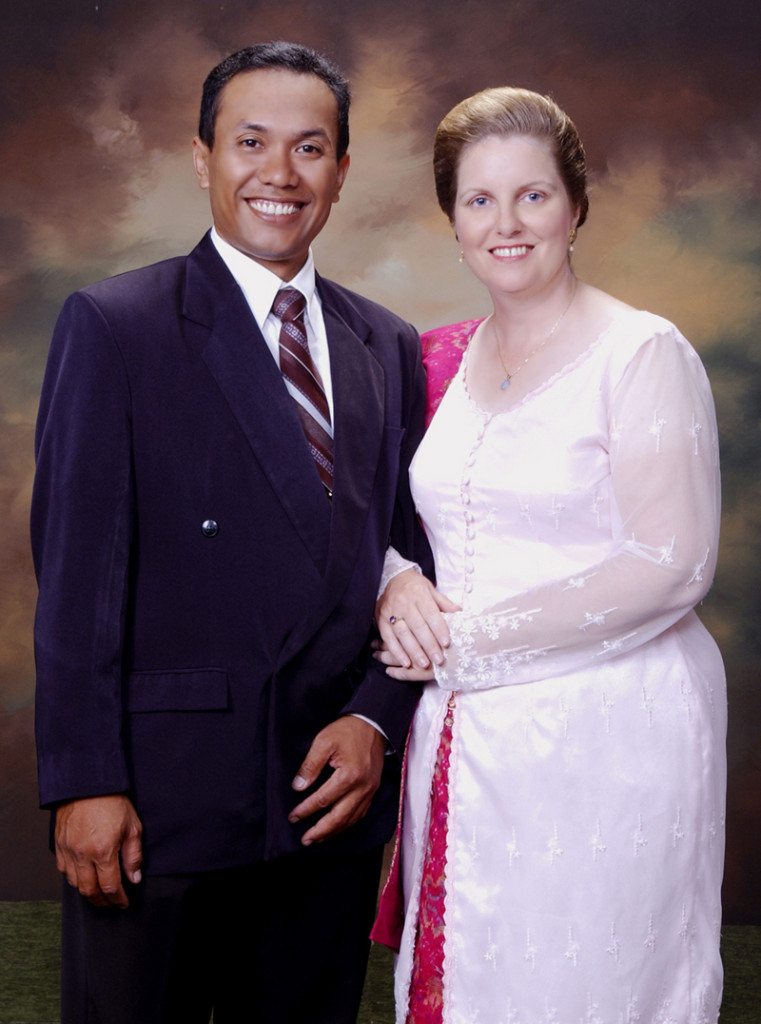 Michele and Kim on their wedding day

“We are each other’s greatest supporters. Knowing that we have got the other’s back gives us freedom to become better individuals. “

Michele: Kim is now a full time lawyer and I have opened my own English course. We’ve never been able to conceive but we are satisfied with all the blessings we have. My blond hair and blue eyes will always set me apart from other Indonesians. I will always be different but have used my differences and my love and respect for my adopted country, my husband and his family to, in some small ways, make the world a better place. Our love and commitment to each other has hit a few rough spots over the years but continues to grow. I would say that we are now a perfect fit because of years of practice.

“The perfect fit is after the many arguments and their resulting compromises and mutual forgiveness. If you can survive the first two years of mashing your lives together so both are comfortable, you can then strive to grow.

We are each other’s greatest supporters. Knowing that we have got the other’s back gives us freedom to become better individuals.” 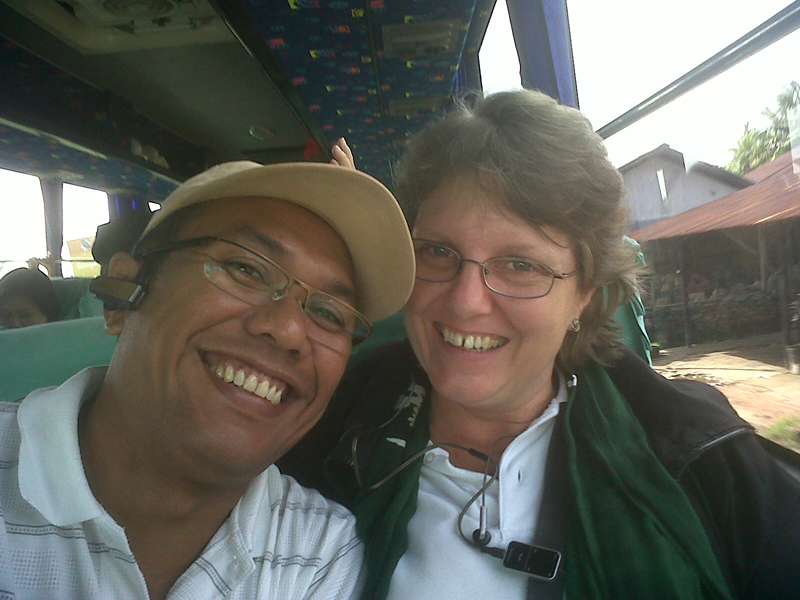 Kim and Michele on the bus on holiday

Michele and Kim plan on growing old together. Asked for any good advice for other cross-cultural couples they say:

1. Once you forgive, you never bring up the matter again because there are plenty of new matters that will come your way.

2. We decided within the first few months of marriage that divorce would never ever be brought up as an option. As a result, we found we had more freedom to express ourselves.

3. We are committed to stay together no matter what.