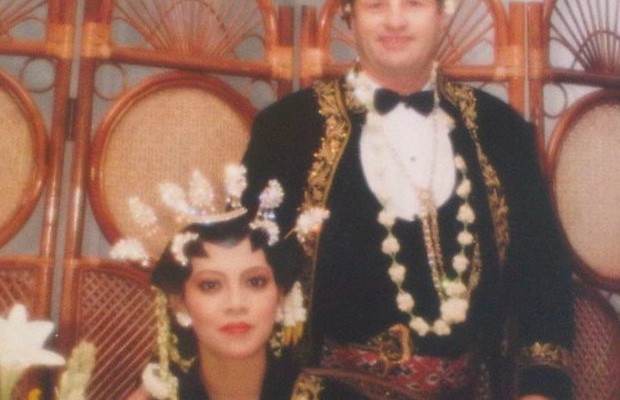 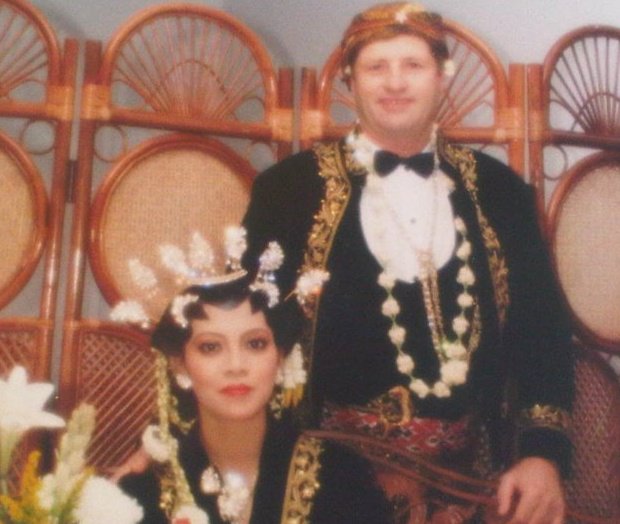 Julivanie and Clive at their wedding

This is the fifth installment of our cross-cultural couples series. You can read back all the wonderful stories from our previous cross-cultural couples here. As we move on, we change territories once again. After having touched down in Canada, Indonesia, the Netherlands, Malaysia and New Zealand, we now return to Canada. Bandung born Indonesian Julivanie met the love of her life in Jakarta Indonesia and settled in Whitehorse, Canada with her husband Clive. They have a daughter called Sarah.

Julivanie:’I met my husband in 1995 in Jakarta through a mutual friend. Our relationship started as a friendship which over time blossomed into a close relationship. After eight months, we realized we are meant for each other and we got married fifteen years ago.

The first thing I asked him was “Where do you come from?” He smiled and frowned at the same time. What should be the simplest answer ended up in a neatly typed 3 page portfolio he handed me the next day.  I read it that night. He said to me not to worry if I didn’t get it at the first time. 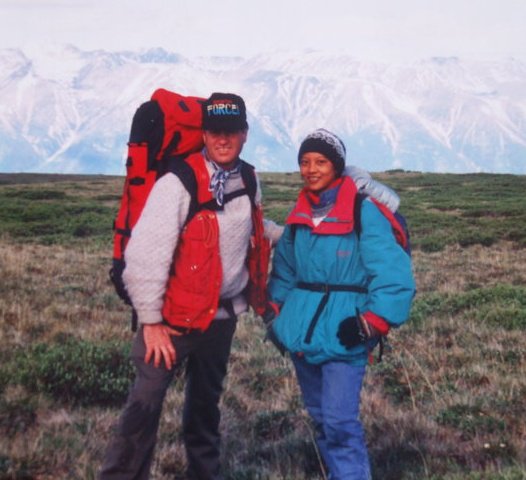 Julivanie and Clive in Canada

He said that he has two passports; UK and Canada. He was born in Scotland. As a son of a British, Irish and German military family, he grew up in Kenya, Somalia, Ethiopia and Libya in Africa, the Middle East, Egypt, and Malta. Then he went to University in Montreal, Canada and Camborne, UK.

He works around the world as geologist from Canada, USA, Mexico,  Central and Latin America, Africa, Middle East, Indonesia, Asia, to Australia and Europe. He eats couscous, bread, stroganoff, spanakopita, hummus, pasta, perogies and spicy rendang. He speaks several languages including Arabic and Swahili, besides English, Spanish, Indonesian and French.

I knew right away, that my story with him wouldn’t stop there….I am right…I am still with this global nomad guy until today…and have one little global nomad daughter.’

What languages do you speak with one another? ‘Indonesian, Sundanese, Javanese, English, Spanish, French, Italian, Arabic and Swahili.’

Well if this isn’t the epitome of a cross-cultural couple! How do Julivanie and Clive deal with all these different cultural traits?

What does it mean to your relationship to be of multiple different cultures? ‘It means that we are global citizens now. It means that we have more interesting angles in viewing human relationships in the world. People, who grow up outside their nationality or passport countries or expatriates as we call them, usually have very interesting, invigorating, yet very challenging and less regular Joe or Jane type of childhood experiences. They have rich intercultural, refreshing and sometimes mind boggling life styles. People like this are usually called global nomads, world citizens, travellers, traders, merchants or adventure seekers.’

Has it ever caused any problems or miscommunication?
‘Yes of course. Even people from the same culture have issues or problems with miscommunication. It is not the problem that matters, but how we work around those problems and find solutions, that is our intention. I made some adjustments and adaptation to my lifestyle and point of view. It gave me new horizons and pictures, as I looked from completely different views, angles and perspectives than I used to. The window that I used before was my Indonesian woman window.

As I slowly started to get to know my husband and ‘his kind,’ I realized that we need to have a very open mind.

Therefore, conversations, jokes, feedback, arguments and discussions never run dry or dull. There are always tons of subjects to explore, secrets and hidden caves to conquer regarding multiculturalism and inter-nation understanding.’

What are the biggest challenges you had to overcome?
Julivanie:’We are one global nomad family who constantly moves from one place to another in this world. We leave our family and friends behind and meet new people. The farewells and travel are hard, but on the other hand, it is what we are now, one of global nomads family in this world.’ 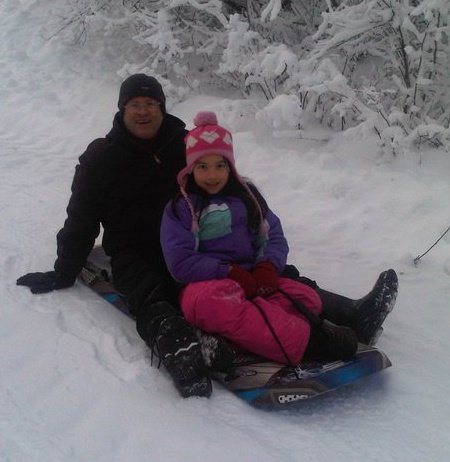 Clive and daughter Sarah on a sleigh

Julivanie and Clive also have a little daughter, Sarah. What is it like to grow up as a result of the love between two culturally different people?

How about your daughter? Julivanie: ‘After five years together and constant nomadic moving about, we decided to have a child. Alhamdulillah, our little baby girl was born, healthy, safe and sound.

This means that our nomadic team now consists of 3 people, our daughter, my husband and me. We raise our daughter with global hearts as we don’t want her to have prejudices and stereotypes towards any nation in the world. She is after all mixed, a little bit of everything, British, Irish, German, Sundanese and Javanese Indonesian.

We would like her to grow as a passionate individual who is proud to say that she is a global nomad, a world citizen and wants to promote world peace. As for now, she has two passport countries of Indonesia and Canada and speaks four languages of Indonesian, Sundanese, English and a little French, plays piano and kecapi and learns traditional Indonesian dances besides figure skating and swimming.’

There is a special term for this Third Culture Kids or TCKs, when they become adults, they are called Adult TCKs.  They have lots of places, languages and cultures in their lives, that’s  just the way they are. For more information on raising Third Culture Kids, check out the website of TCKWorld.

What are the best things that this relationship brings you? Julivanie: ‘Enriching both cultures and “gliding” in switching languages. Our daughter grows up as a passionate, caring and empathetic young lady who cares about people of all kinds of races. We understand each nation’s feeling and perspective.’ 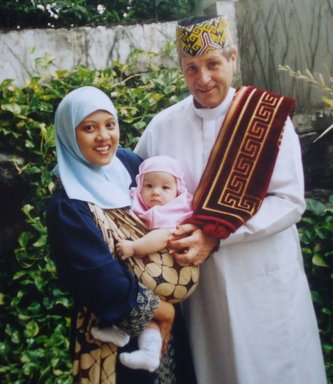 The three of them: Julivanie, Sarah and Clive

What makes you guys a perfect fit? ‘My husband is a calm thinker and I am a chatty and fast person with action.’

Are religious differences an issue between you and your partner?
‘
In our family we have one religion, we are muslims. We met as a muslim couple. As it is stated in the Holy Quran…Surah Al Hujurat 13 (49:13):

49:13 O mankind! We created you from a single (pair) of a male and a female, and made you into nations and tribes, that ye may know each other (not that ye may despise (each other). Verily the most honoured of you in the sight of Allah is (he who is) the most righteous of you. And Allah has full knowledge and is well acquainted (with all things).’

Do you have any tips for other mixed couples? Julivanie: ‘Yes, be patient with each other since it is a huge learning curve to be able to see each other’s point of view. Never stop learning about anything in this world, including multiculturalism and multilingualism. The most important thing is open your heart and get rid of typical stereotypes toward any nations in this world.  Peace will be upon you. Wassalam .’