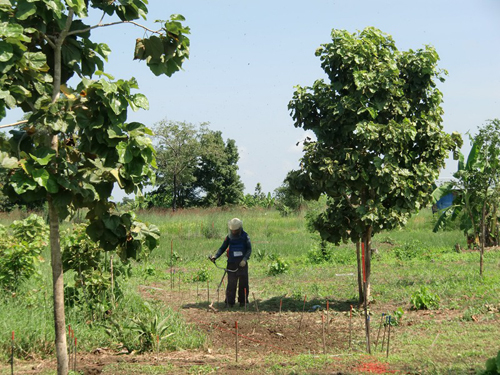 Cleaning Up Landmines in Cambodia

More than twenty years after the peace agreement was signed, landmines and other unexploded devices are still a problem in parts of Cambodia. But thanks to hard working deminers that problem is getting smaller day by day.

Mine Field Sisophon by Ate Hoekstra

Kuon Samraong is cleaning up landmines. The young Khmer man started the job at Halo Trust a few months ago, one of four organizations that are dedicated to remove all explosives left in the country after decades of war. And, like many other Khmer people in the north and northwest of Cambodia, Kuon grew up in an area that has been affected by landmines. An area where having a landmine in your backyard is not that unusual. That’s what made him decide to become a deminer.

In the tropical heat of Northwest Cambodia, not far from the Thai border, Kuon is clad in a protective suit and a protective helmet. If anything happens, these clothes will lower the risks of getting seriously injured, but with 33 degrees Celsius the heavy clothing does not make working easier. Once he has taken his helmet off, Kuon says he hopes to help his country by doing this job. “It’s not easy to be in the minefield all day and I haven’t found any mine myself, but I enjoy the excitement and I feel I need to do this for my country.”

Kuon is one of many Khmer who search the minefields on a daily basis. Their work is very much needed. In the 1980s, during the long, and bitter civil war between Cambodia, Vietnam and the remaining Khmer Rouge – the regime that was defeated in 1979 – millions of landmines were used to take out the enemy. According to some scources, at one point there were even more landmines than people in Cambodia. 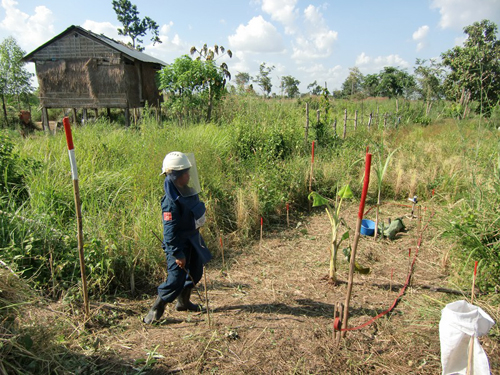 Mine Field Sisophon 2 by Ate Hoekstra

In 2009 there were still an estimated 4 to 6 million landmines in Cambodia. How many remain today is unknown, but according Stanislav Damjanovic, deputy programme manager of Halo Trust, it will take at least ten more years before all mines have been removed. “Especially now that Cambodia is developing, it’s important to clean up the minefields”, Damjanovic explains. “The farmers want to use the land, so they can produce more rice. But they can only do that when the threat of mines is gone.”

Years after the war, Cambodians still get injured or killed by landmines. According to the official statistics landmines killed 43 people in 2011 and injured 186, but because not all incidents are registered, the true number of casualties may be much higher. A sad example occurred last October in the province of Battambang, in the northwest of Cambodia. An antitank mine killed six farmers and wounded two when their vehicle hit an antitank mine. “It’s the antitank mine that causes the most severe damage”, says Damjanovic. “Most of them will not explode when you walk over it, but as soon as a farmer earns more money and buys a tractor, the mine will explode.” 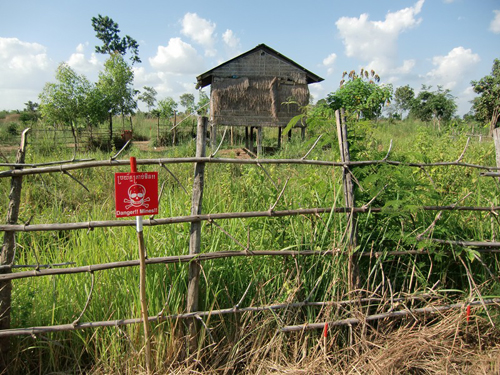 Mine Field Sisophon 3 by Ate Hoekstra

Because of the dangers many Khmer people living in the countryside have decided to not use big parts of the land and to only use parts of which they are sure it is safe. It is the work of the demining organizations and their deminers to change that situation. At the small village of Reaksmei Sameakki one of those deminers is Horm Samnang, a young woman who hopes to make a difference. “It’s not an easy job”, Samnang says. “And especially in the beginning I was a bit scared to go to work. But I’m doing this for the future of my country and with the salary I can take care of my children.”