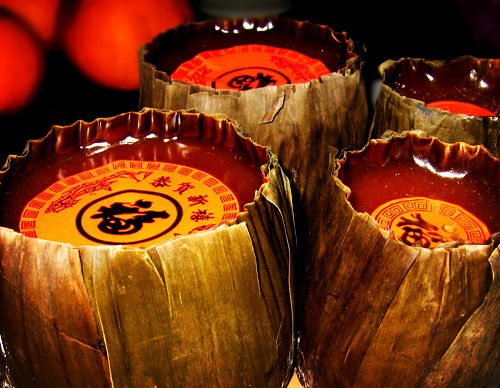 The celebration of Chinese New Year never goes without food. A special cake which is made only for the celebration of Chinese New Year is called Nian-Gao (New Year Cake) in Mandarin. The New Year cake has become well known in other countries where Chinese communities celebrate their New Year. For instance, in Indonesia this sweet snack is adopted by the Indonesian community under the name ‘kue keranjang’, which means ‘cake in a basket’.

According to classical Chinese stories, the sweet snack is made to be an offering to the kitchen God. Each home has a kitchen god, who has to make sure that the family that lives in the house brings their daily offering to the God of all Gods. The sweet snack is to bribe the kitchen God and to prevent him from telling bad stories about the family to the God of all Gods. The sweet taste of the cake symbolises the hope of the family for a sweet life during the coming year, whilst the sticky texture symbolises the wish for peace and harmony within the family.

The cake is made of a mixture of glutinous rice flour, brown sugar and water (or coconut milk) which is steamed in small baking tins or baskets, lined with bamboo/banana leaves or plastic. According to an old belief one should not prepare the Chinese New Year cake when one is in a bad mood or is angry with someone else. Also women should not make the cake during menstruation to make sure that the cooking process won’t fail.

a few bamboo or banana leaves, run over flame to drive out the moisture (but not burnt)

4-5 10 cm-width round baking tins or baskets

If the cake doesn’t get consumed during Chinese New Year, it can be kept in the fridge for days and sometimes until the Lantern Festival, 15 days after Chinese New Year. The cake tastes good when sliced, dipped in egg yolk and fried up for a snack.