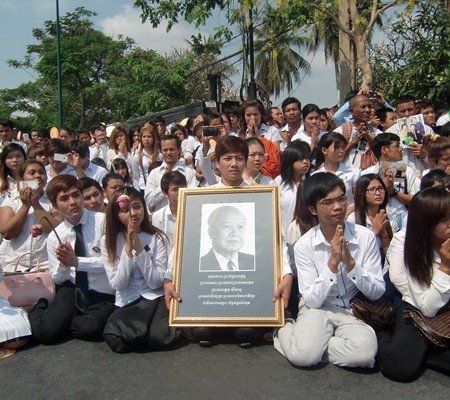 “That is the most beautiful firework I have ever seen!” a young Khmer yells. The management student watches the fireworks that light up the Cambodian sky in honor of the late king-father Norodom Sihanouk. Just a few minutes earlier the body of Sihanouk was cremated at Veal Mean, the cremation site next to the Royal Palace of Cambodia. It’s the end of a four day funeral ceremony for the ‘father of Cambodia’ and the end of an era lead by perhaps the last great king of Cambodia.

The ceremony started a few days earlier, on Friday, February 1. In the early morning tens of thousands of people gathered in the streets of Phnom Penh, all of them dressed in white shirts, Cambodia’s color of mourning. They sat on the sidewalks, burned incense and held photos of their beloved king-father. 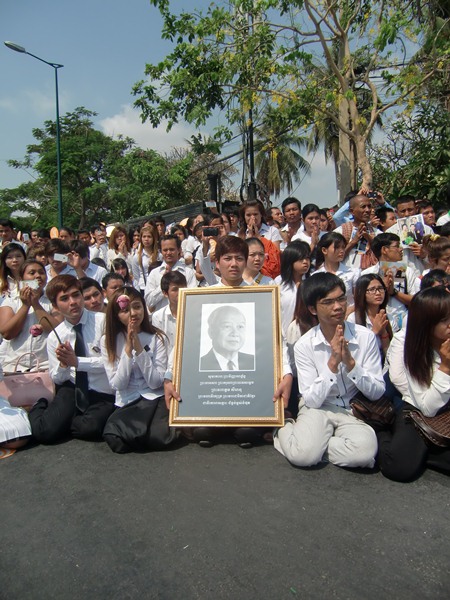 Cambodians dressed in white, at the parade for King Sihanouk

Around 9 AM an impressive parade started, with over 5.000 participants, among them military, students, policemen, minorities from the northeastern province of Ratanakiri, traditional apsara dancers and scouts. Prime-minister Hun Sen, king-mother Norodom Monineath (queen Monique) Hun Sen and the current king, Norodom Sihamoni, the eldest son of the king-father and queen Monique, joined the parade. It was king Sihanouk’s final journey, as his golden coffin was carried to its final destination of Veal Mean.

Upon the king’s coffin passing by, emotions ran freely. A group of older women cried their hearts out when the king passed Phnom Penh’s Norodom Boulevard. A policeman kneeled deeply, his tears dropping on the tarmac. Young girls prayed, burned candles and held a large portrait of a young Sihanouk dressed in military attire.

“I am very sad that we lost our great king”, Sim Smean said, a 17-year old student wearing a T-shirt with Sihanouk’s face printed on it. “I am too young to have met him in person. But many times I have seen him on TV and my father always told me of the great things he has done for our country. I really believe he was the father of all Cambodian people.”

Friday’s parade proved that, even though Sihanouk gave the crown to his son in 2004, the king-father was still a deeply loved and highly respected figure up until the day he passed away on October 15 2012. Much of that love stems from the 1950s and 60s when he became head of the state. He succeeded in negotiating independence from France that had ruled Cambodia between 1867 and 1953. He brought wealth and prosperity to the country and for quite a few years managed to keep Cambodia out of the war that ravaged neighboring Vietnam. And even though Sihanouk had tight connections with the Khmer Rouge in the early 70’s and things went terribly wrong when the Khmer Rouge brought hunger, death and despair to the nation, many Cambodians still love him and fear a future without the king-father. 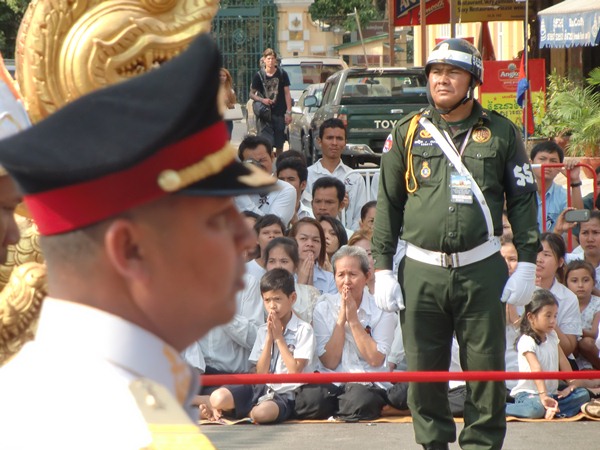 The parade for Sihanouk

After the coffin with the king’s embalmed body – that had been kept in the Royal Palace for over 100 days – had made its way to the cremation site, thousands of people came to pay their respects to Sihanouk, especially in the early hours of Saturday, Sunday and Monday. Young and old, men and women, monks and policemen, all of them lined up to see the coffin, to pray and to burn incense.

“The king brought us peace and wisdom”, a manager of a shoe factory said near the cremation site. “When he was in power, there was less corruption, turmoil and exploitation in our country. He brought us wealth and we can only hope the government will rule the country like Sihanouk has done.” 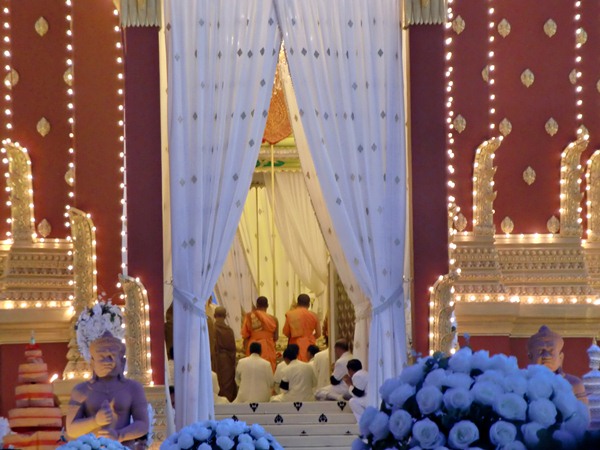 The cremation of King Sihanouk

Farewell to a King

On Monday the era of Sihanouk came to an end. After dignitaries from all over Cambodia, the prime-ministers of France, Thailand and Vietnam, prince Akishino from Japan and other foreign guests had paid their respects to the king-father, the king-mother and king Sihamoni said farewell and lighted the coffin at 6.33 p.m. The sound of artillery thundered through the air, fireworks lit up the sky and in a street next to the cremation site people started praying and crying for their king.

But at the same time, thousands of mourners were not allowed to get anywhere near the palace and stopped at the barricades. Although some had to wait for hours, civil disobedience brought success in the end. A few minutes after launching the final fireworks, three brave monks decided to ignore the police’s orders and climbed over the fence to make their way to the pagoda opposite the Royal Palace. The police watched on but didn’t do anything. Thousands of people followed them, yelling, laughing and cheering. Among them was a young student who just saw the most beautiful firework of his life and was now up to say farewell to one of the most extraordinary men in Cambodia’s recent history.