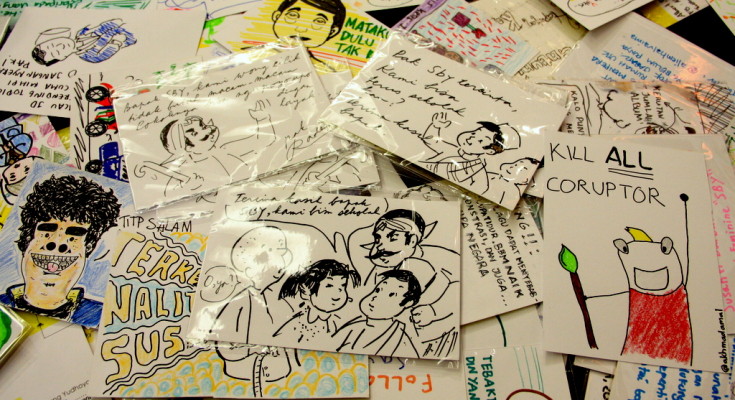 Brace Yourself, SBY, a Sack of Postcards is Coming

In the award-winning clay-animated film Mary and Max, the two main characters find a best friend in each other through letters. Mary Daisy Dinkle and Max Jerry Horowitz feel so excited every time an envelope comes, immediately write back after one does, then can’t wait to receive another.

The story is set in the 70s a time without these modern ‘space-and-time compressors’ like cell phones and the Internet. Today, we obviously are. Yet, as shown by Card to Post, an independent project run by writers Rizki, Putri, and Dea, the excitement of keeping in touch by post is back! The long distance and time as well as the human effort involved in sending — and waiting for—postcards, apparently have a nostalgic effect on our generation. 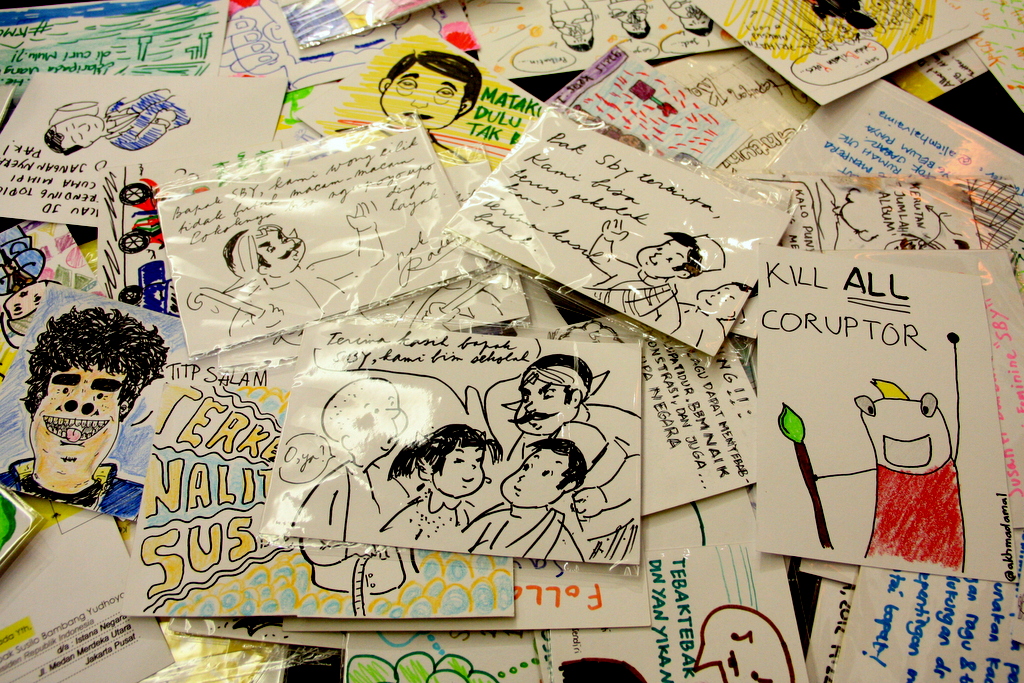 Some of the postcards for the president - doc CtP

I’ve never met Rizki in person but while chatting with him via instant messenger, I noticed his profile picture. He looks like a bibliophile. A fun one, I must stress, because he is the initiator of Card to Post.

Rizki let me know about his liking of photography and sharing his works. He also loves to see other people’s photos. Not digital photos, he prefers the real ones. ‘I wanted to invite people to exchange photos in a physical, printed format. Then, the thought of doing it with postcards came up,’ said Rizki. 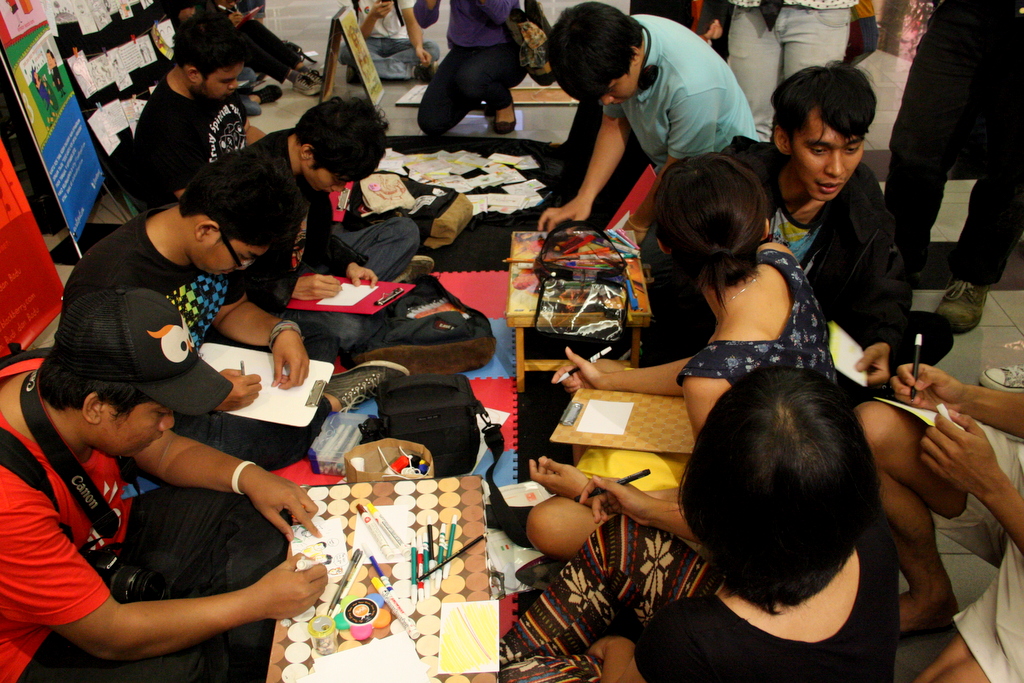 Combine that with the odd fact that sending postcards was a new thing for him, then you have the story of how it all began. ‘Personally, I wanted to feel the enjoyment of sending postcards. Ha-ha! Before Card to Post, I had never sent any,’ he admitted.

All that happened in September 2011, three months after his encounter with Putri and Dea in an art critique writing workshop. Instantly, the three teamed up to develop the project. Soon, Dea promoted it on her personal blog salamatahari.com. Rizki, however, wasn’t sure if people were still interested in postcards. It was until he surprised some friends with the postcards he had sent. He recalled, they were incredibly happy to receive them.

Card to Post finally got underway in November the same year with the opening of its online page at cardtopost.blogspot.com. It started with two objectives. It seeks to, in Putri’s words, ‘invite everyone to feel the romantic pleasure of writing messages in this more personal way,’ and, ‘encourage them to produce creative works.’

The creative works could be anything. Photographs are but one example. ‘Card to Post doesn’t want to limit people’s creativity. […] It’s OK if you send a postcard you buy in the shop. But we urge you to make your own postcards,’ said Rizki.

In a few months Card to Post grew to nearly 400 members, spread throughout Indonesia and even overseas as far as Washington DC. Some of the postcards the members exchanged are displayed on their blog.

1000 Postcards for the President

Card to Post tries to go a little bit further than sending postcards. It seems to have an agenda—though Rizki would say otherwise. The legendary visual artist Pak Raden had a problem with the government concerning his work’s copyright, Card to Post took the initiative to raise awareness on the issue online and by holding an event where people paint postcards together with Pak Raden. 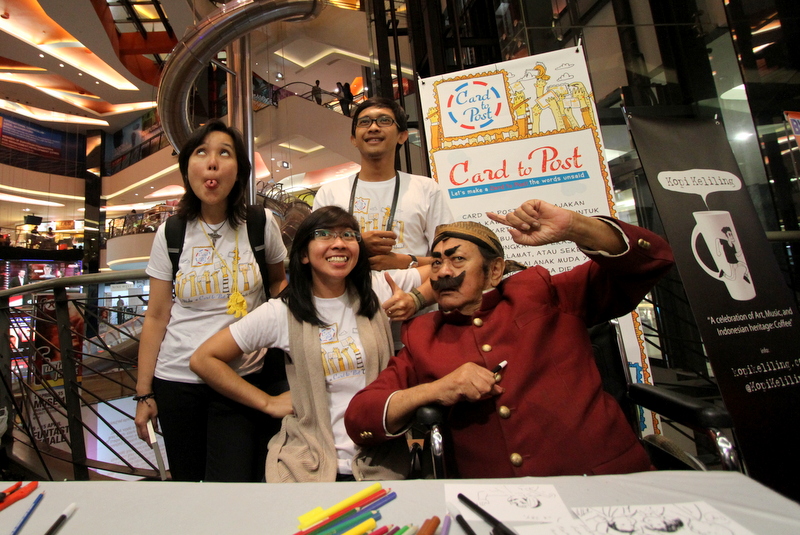 Meanwhile, they have also been preparing for a bigger cause. It’s called ‘1000 Postcards for the President.’ The idea is that people make postcards for the current president of Indonesia, Susilo Bambang Yudhoyono a.k.a. SBY. Make no mistake, despite everyday examples of less than ideal governing, the postcards do not necessarily have convey political criticism.

‘You can even share your love story or a joke,’ Rizki said. As it turned out, on one postcard, someone simply drew a man with a guitar asking SBY if he’d be willing to record an EP with him (FYI, the president launched his fourth album in 2011). Then there was a 10 year old who innocently wrote questions like ‘Sir, have you ever said dirty words?’ and ‘Before becoming a president, did you ever work as a balloon seller?’

The crew has been collecting postcards for the president since February and has got over 300 pieces to date. By July, they will select 1000 card works to be exhibited for 10 days, starting on President SBY’s birthday on September 9, before posting them to the president’s office. A nice birthday present for a busy man, I suppose. 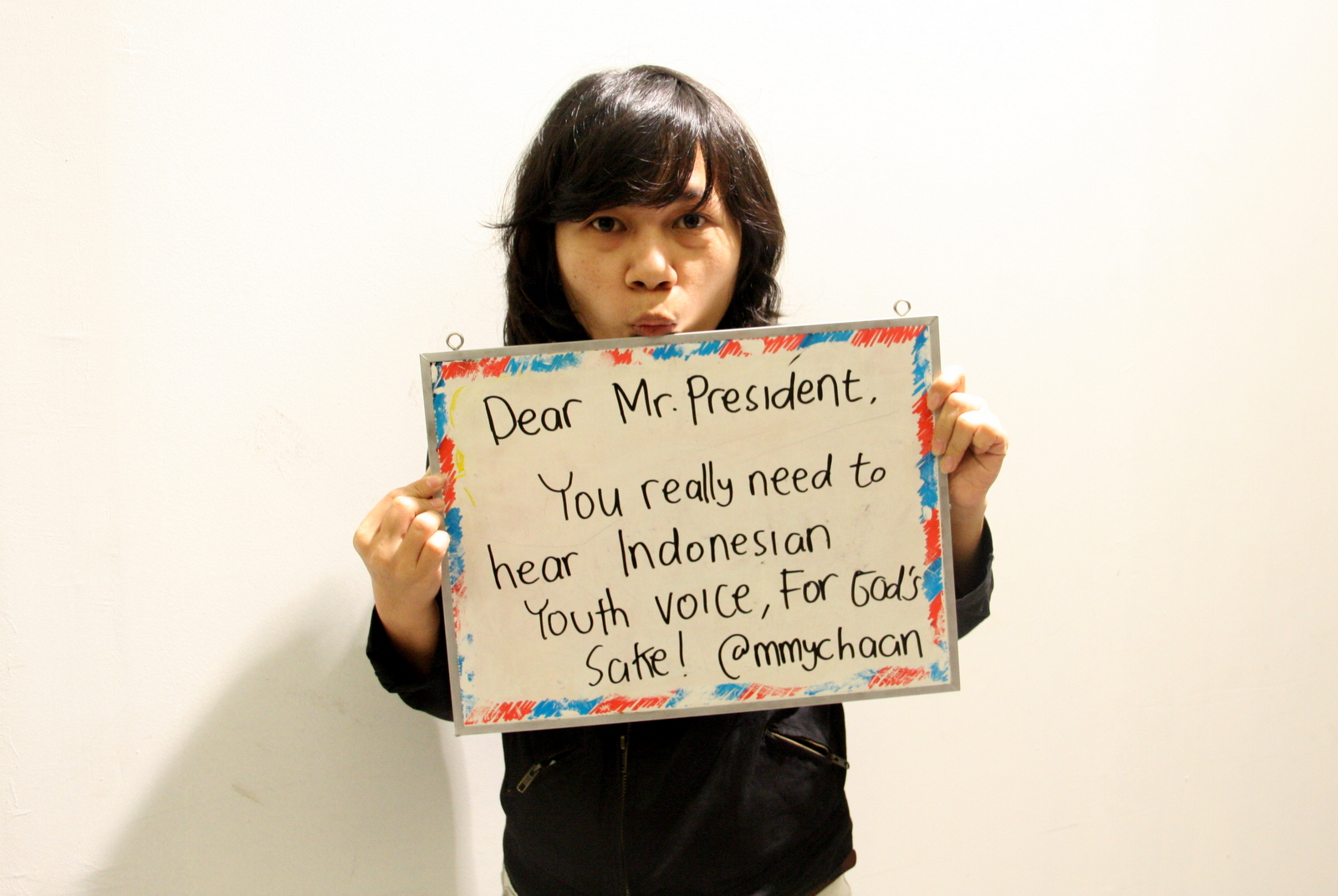 Loud an clear, a postcard for the president - doc CtP

Now the trio have taken the project yet another step further by preparing a more professional-looking website to facilitate the members and display the postcards. Rizki told me they wished Card to Post to become a kind of social networking site. Like Facebook? ‘Yes, only the primary means of interaction are postcards,’ he said. 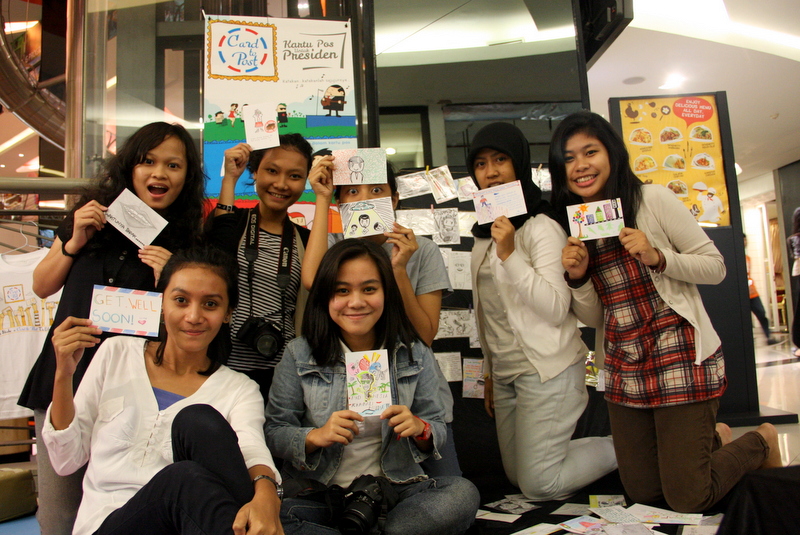 Card to Post has been working with generous buddies like IT specialist Hafiz Badrie Lubis, promo expert Hiralalitya, and digital artist Made Wirawan. They are serious about this. Unfortunately, it’s never been easy for them to get a sponsor.

The state’s postal firm Pos Indonesia promised them support some time ago but there has been no realization. They have been forced to dip their hands deep into their own pockets so far.

‘It begins to take its toll a little, but the fun pays off,’ Rizki cheered himself up. He considers every postcard he receives a mood-booster—something confirmed by Putri. ‘[The fact that] people ‘bother’ to send us postcards shows we’re special enough,’ she said.

Well, I just got one from Malaysia myself, and I agree.