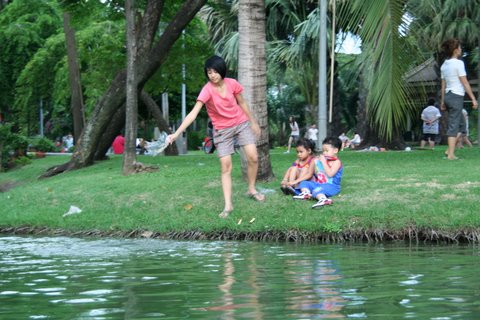 In a city where traffic jams persist, sidewalks are crammed with vendors, and pavement is everywhere, Bangkok hosts a surprising number of green retreats.

Feeding the fish at Lumphini Park, By: Isaac Olson

Mass aerobics and lakes with paddle boat rentals are common features in Bangkok parks. Surrounding fences and police presence in the parks keep the areas safe and closed up at night. Alcohol and even smoking is not allowed, but food and non-alcoholic beverages are acceptable.

Below are some of the best parks to escape the noisy traffic and breathe in some fresh air.

Probably the most well known park in Bangkok and one of the largest, Lumphini Park is a maze of walking paths, trees, and waterways. A great place to people watch, this island of green is a favorite place for joggers due to its central location and plentiful shade. Early in the morning, the park comes to life not only with joggers but also with mass aerobics and tai chi. Giant monitor lizards slowly lurk around the park, pop their heads out of the water, and scarf down whole fish. The best time to see them is at dawn or dusk. Also unique to Lumphini park are the pavilions, which sometimes host dance classes or concerts. Access this recreation area by Silom or Lumphini MRT or by Sala Daeng BTS stations. 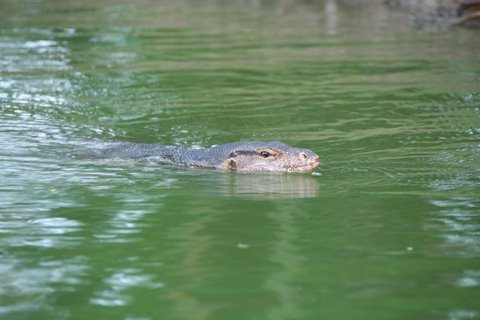 Two Bangkok Parks for the Price of one: Chatuchak and Rot Fai Parks 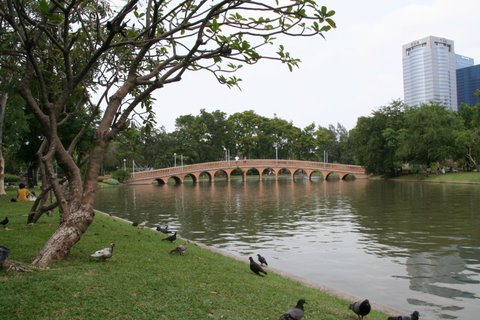 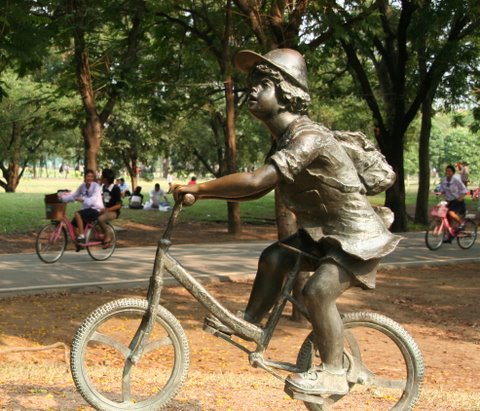 These two parks, together with Queen Sirikit Park, form a massive green space in northern Bangkok even larger than Lumphini Park. Chatuchak Park conveniently sits right next to Chatuchak Weekend Market. While the market is open, the south side of this urban sanctuary is busy with shoppers trying to escape the extreme heat of the market. This area features plenty of walking paths and playgrounds for kids. Paddle boats can also be rented for a cruise on the water, and vendors renting picnic mats are common. Chatuchak MRT or Mo Chit BTS stations serve the park.

One of the most enjoyable places in Bangkok is Rot Fai (Train) Park where cyclists rule. Formerly a golf course, the space has been converted into a bike park with kilometers of cycle paths.  Bike rentals are available outside of the north entrance behind a parking lot and food stalls. Kayaks can also be rented at a lake close to the north entrance. Especially good for kids, the park has a mock up city to teach road safety, a kids swimming pool, and a number of playgrounds. After exhausting yourself from cycling in the heat, take a break at the cafe near the north entrance where food, ice cream, and cold drinks are available. Take the MRT to Phahon Yothin station then walk to the park’s north entrance.

To escape the chaos of central Bangkok, head to the outskirts of the city to experience well manicured gardens at King Rama IX Royal Park. This expansive urban retreat features rows of hedges and flowers not often found outside of royal residences. The gardens have a number of photogenic locations making it a favorite place for wedding or graduation photos. Taking aquatic space to new levels, there is a massive lake in the park with a path encircling it. Of course, swan shaped paddle boats can be rented for time on the water. There is also an exercise area with work out contraptions and weights. It’s best to get to the park by taking the BTS to Udom Suk station, then a taxi up Sukumvit Soi 103.

Pagoda in a pond at King Rama IX Royal Park, By: Isaac Olson

A small park in Bangkok’s old city, this little urban gem is a nice reprieve from stomping about the historical attractions. After following the tourist trail through the sights, it’s nice to see local Thais engaging in a little R and R here. A loop path goes around both the park and a pond. Not to be missed are the models of traditional Thai houses. One corner of the park also features ping pong tables, where locals especially get into the game in the evenings. The park is located across from the Grand Palace and between Sanam Chai Road and the inner canal. 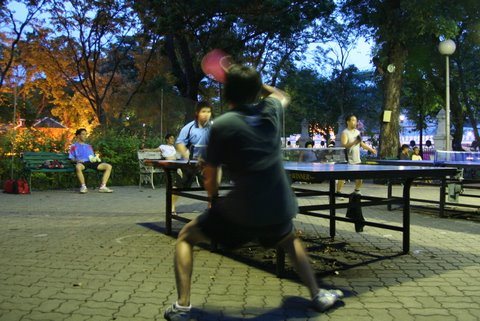 Getting into ping pong at Saranrom Park, By: Isaac Olson

Other Parks in Bangkok

Benjasiri Park (BTS Phrom Phong) on Sukumvit Road comes to rescue people from all the shopping. This medium sized park has a fountain and pyramid sculpture and bustles with people. Across from the Grand Palace is the recently redone Sanam Luang which is basically a grassy mall with a walking path encircling it. A night market resides close by.

While visiting Bangkok, don’t forget to get out of the malls and into its green spaces. The heat of the city isn’t so bad when you are in a natural, shaded island of green.