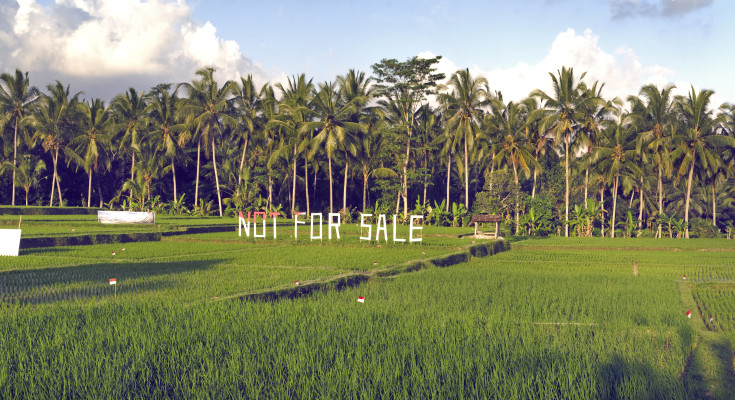 Ubud's rice paddies are not for sale, By: Masato Miyoshi

The lush green rice paddies of Bali and its unique water management system of subak are under threat. Tourism and water shortages are some of the many causes. The good news is that this week representatives of Unesco will visit Bali to see if these paddies can be put on the World Heritage List. Anthropologist Steve Lansing delighted everyone with this news at the Ubud Writers and Readers Festival.

During the panel discussion ‘Cycle of rice’ Steve Lansing was called ‘the rockstar of rice’ by the other panelists–writers and experts on this subject–such as adventurer Jan Reynolds who has lived with indigenous tribes on each continent for her award winning series about vanishing cultures. The third panelist Kirk Johnson is the director of the Bali Field School of the University of Guam and brings students to Bali to experience the rice culture. 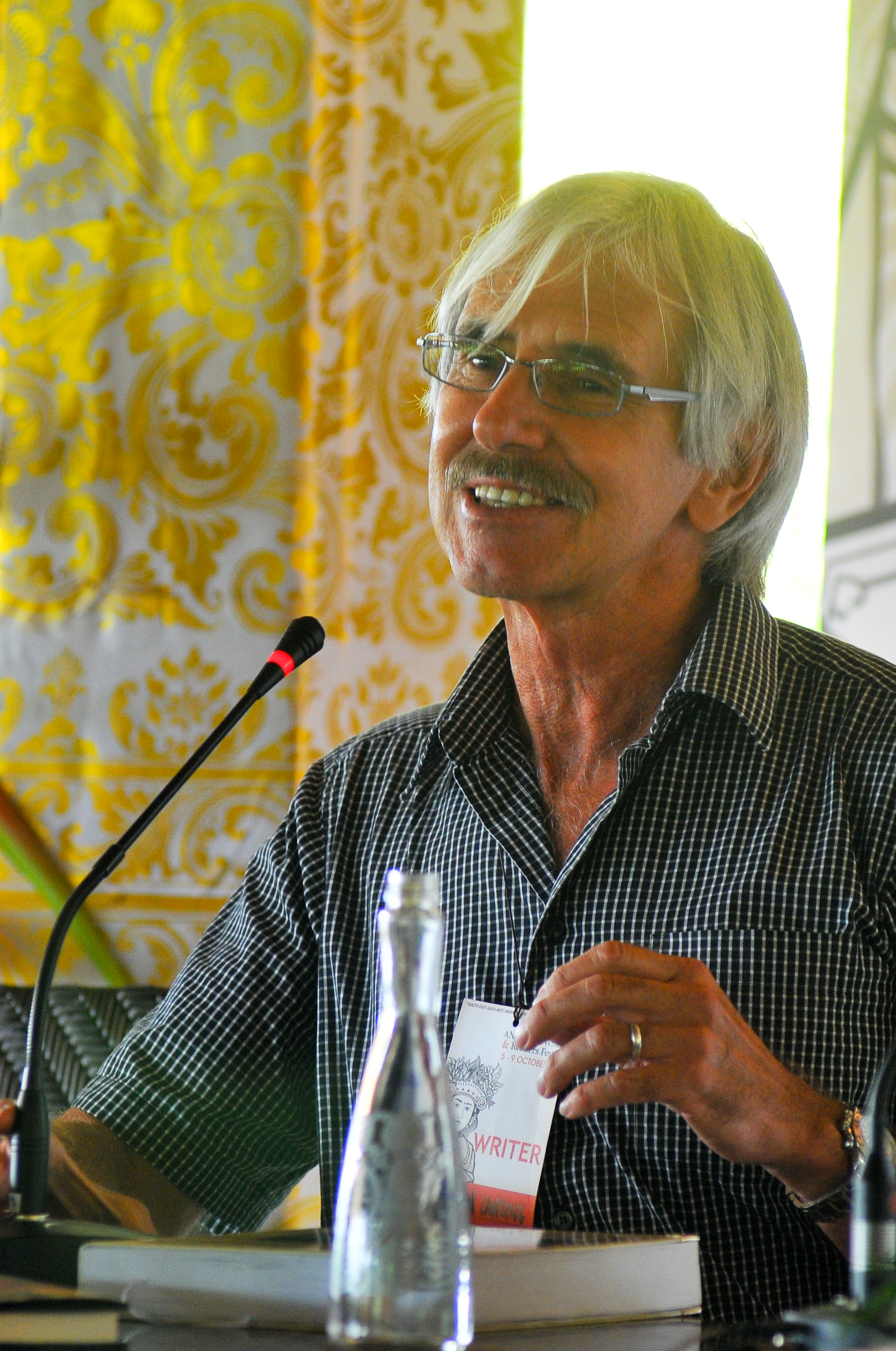 Anthropologist Steve Lansing a.k.a The Rockstar of Rice, By: A. Pratisto

Steve Lansing and the Universal Value of the Subak System

The chairwoman Gouri Mirpuri, a columnist on environmental issues for Globe Asia, also pointed out the authority that Steve Lansing gained over the years: ‘Steve is the guru of explaining the complex Balinese rice system and culture to the world.’

Lansing came to Bali for the first time about 35 years ago, when Ubud was just a muddy road, and ever since he has studied the uniquely Balinese water management system of the rice paddies called subak.

At the very location the discussion took place, in restaurant Indus, owned by festival-founder Janet De Neefe, a direct view on the rice paddies illustrates the importance of today’s topic. Steve Lansing states that it’s not only a beautiful site, but that these rice terraces form a whole complex, cultural ecosystem.

‘Subak has an outstanding universal value’, Lansing says. ‘It’s a democratic system of sharing water since the 11th century. Groups of farmers attain water from the same source, coming from mount Batur. Water is considered a gift of God. The priest allocates the water and special ceremonies are held at the water temples.’

The farmers group comes together, discuss and manage the system as a community. They coordinate the schedules on when to plant and harvest. Lansing: “Have you noticed that in one area the ricefields are at the same stage of growth? They plant at the same time as a means of pest control. When they harvest the rice all together, then the rats and insects lose their source of food. Subsequently they open the irrigation canals and flood the land again.’

What is happening now in Bali is that every year at least 1000 hectares of paddies are converted into other use of land, usually ‘leased’ to investors. More villas are being built and investors have major plans for more resorts and hotels. The  rice farmers have nowhere to go and lose their source of income. With the selling of the land, not only a stunning view gets lost, but it also breaks down the subak system. Lansing: ‘As soon as one farmer agrees to convert his land and a villa is being built in the middle of it, this will lead to a domino effect. Neighboring farmers start to sell their land as well.”

Lansing also points out the devastating effects of the so-called ‘Green Revolution’ that was introduced to Indonesia in the seventies. The Worldbank and the Indonesian government agreed at the time to use chemical fertilizers to make the rice grow quicker to be able to produce more. “The subak used to fertilize their land organically. The volcanic soil was already fertile, they didn’t need a Green Revolution. But Indonesia was poor and wanted to give the economy a boost. Now we deal with the consequences.’

Gradually some farmers are going back to growing rice in an organic way, with government subsidies, but that takes time. The soil has to recover from the chemicals that are being used for centuries. Gouri Mirpuri: ‘Recently I visited some organic rice fields and the plants were so tall, I was impressed. Normal rice paddies only grow up to knee-height, but these plants were about 5,8! I have great respect for the farmers, because it is very hard work.’ 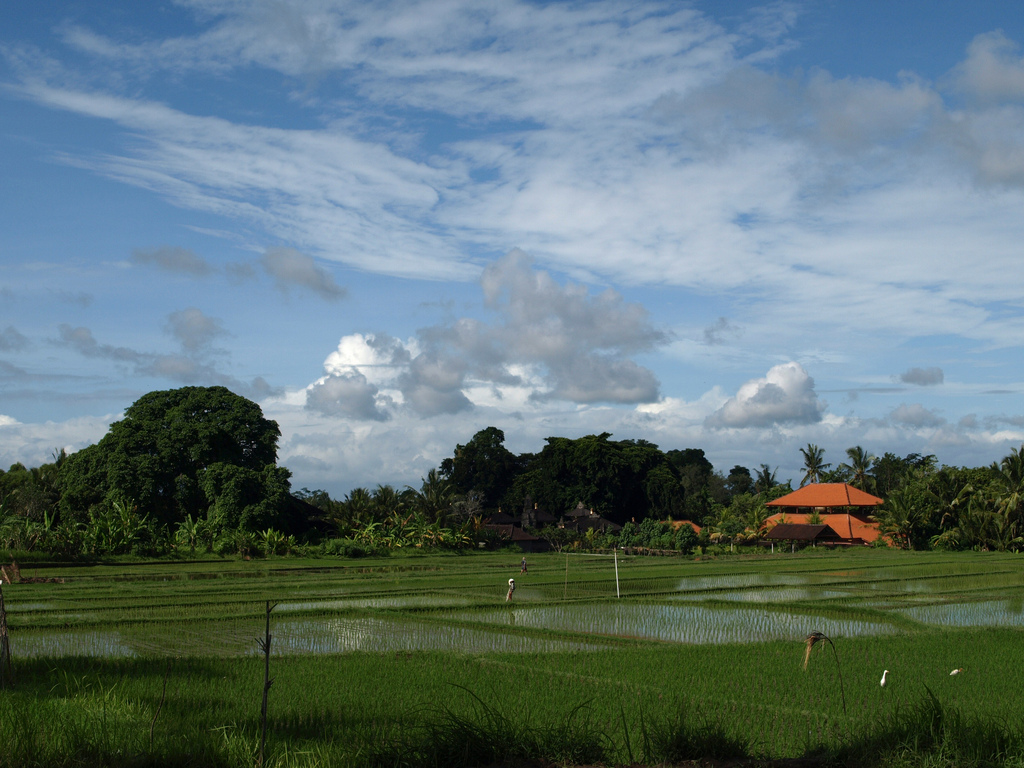 The Subak as Bali's unique rice farming system, By: Grassroots

Kirk Johnson states that there is a devaluation of agriculture all across the board. ‘Nobody wants to become a farmer anymore, but when I bring my students to Bali it has great influence on their lives. Ceremonies are part of Balinese society and it allows them to manage the changes that tourism and modernization bring. The students see that materialism and the western approach of gaining money is not the solution for a happy life. When they come back they re-evaluate their values.’

In her extensive travels all around the world Jan Reynolds has seen similar events happen to indigenous people that have to face modern age. Some were inventive and adapted to the new situation while maintaining their rituals and traditions. ‘It’s important to give the people the authority of their own land. In Kalimantan boys that come off age get a tattoo when they spend time on their own in the forest. Now because of deforestation the head of the tribe still sends the boys into the woods, but with the order to act against the illegal logging.’

Steve Lansing, together with his workgroup, will lead the delegation of Unesco this week along the most sacred paddies of Bali to convince them they need to be protected. In his view the key to success is that the subak should benefit from tourism. ‘But how?’, he asks the audience. There were suggestions like opening a museum about subak. Another idea was to design a genuine eco-tourist attraction where one can learn about planting rice and stay with the rice farmers’ family. Someone pointed out that the long queue of tourists at the airport that are waiting to get into Bali is the perfect place to install an information board.

Lansing wraps up the discussion: ‘This is the last chance to make it recognized as heritage.’ Lansing smiles as he says: ‘The governor of Bali, Made Mangku Pastika, even said he wants the whole island of Bali to become world heritage.’

TAGBali Culture Eco Yvette Benningshof
Previous Post The Temple of Christ and the Sugar Factory: A Javanese Jesus
Next Post Where to Stay in Metro Manila, Philippines