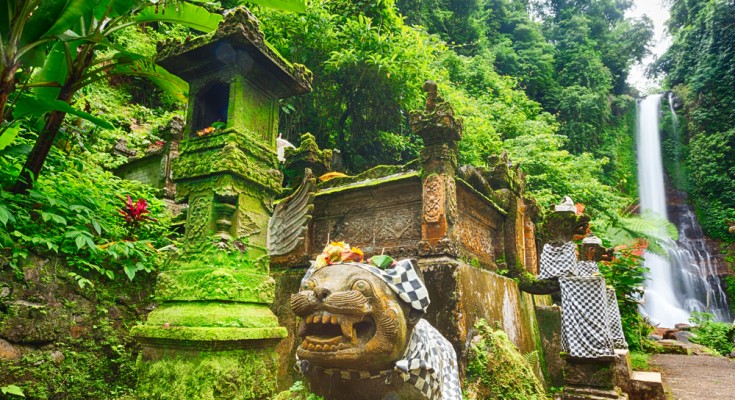 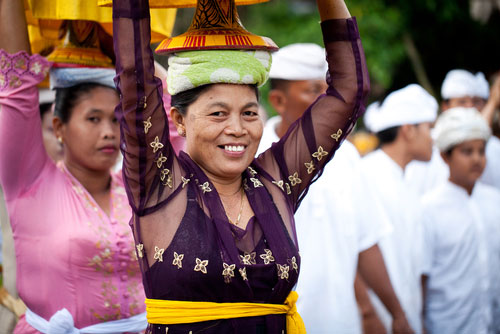 Festival in Gianyar, Bali. Photo by: Magicinfoto at Shutterstock

I was born on the day before Galungan, the most important religious festival in the Balinese calendar, which marks the ten-day period when deified ancestors descend to inhabit their former homes. I’ve always had a love for, and strong attachment, to food— especially Balinese food. This is something that everyone in the compound where I grew up knows and delights in teasing me about.

According to Gung Rai—a close neighbour who has known me since my birth and who has never treated me as anything but another of her own children—it’s pantas (only right) that I’m this way. “It’s fitting that a child whose oton [ceremony held 210 days after a child’s birth and marked every 210 days thereafter] is on Penampahan Galungan loves food so much, because it’s the day when it all gets prepared and cooked,” she says.

Frankly, I think my passion for Balinese food has little to do with the day of my birth and everything to do with Gung Rai’s cooking. I used to get up each day at about 6am and go straight to her kitchen. It was a dark, warm space, with bamboo and rattan workbenches, dominated by a large mud-brick fireplace. Every surface near the fire was covered in a fine layer of soot, even the masses of cobwebs high in the rafters. By this time of the day, she’d already have been to market and be half way though preparing the day’s meal. She would give me a plate of freshly steamed rice for breakfast as I sat and watched her at work.

The food would be cooked in big, soot-blackened pots, balanced on the top of the fireplace. I’d poke the embers and feed the new fire with coconut husks. I loved to make the flames flare up and the sparks jump; I probably made a complete nuisance out of myself, but she never minded or paid me any negative attention. In later years, the packed dirt floor was replaced with white shiny tiles; a fridge appeared and the wood fire was replaced by a gas stove. But the family made a unanimous decision that the food didn’t taste nearly as good as it had before, so a new fireplace was built in the empty space behind the old one. The shiny new kitchen seems to get used less each year.

There was always a huge quantity of raw rice grains being washed and whirled around in bowls, before being drained into conical, woven baskets called kukusan. These were then set to steam on top of specially-shaped pots (payuk)—designed to accommodate the conical baskets—filled with fiercely boiling water. The rice goes through two stages of cooking before it is ready; it is given a preliminary steaming until it is ‘padat’ (half-cooked) and then it is temporarily removed from the kukusan, rinsed in hot water and returned to the fire to be steamed again. The rice takes about an hour to cook through. Gung Rai says she cooks around three and a half kilos of rice for each day of the Galungan festival.

Early in the morning there was never any meat visible: the source was still alive at that time of the day. Three or four fat, white chickens were always strung up by the kitchen door waiting to be slaughtered. Later in the day, feathers would drift along the ground as the chickens were plucked and cleaned. Somewhere sat a bowl of the blood captured from the chickens as their throats were slit. The dark opacity of this blood fascinated me; it was only later in life that I realized not everybody cooked with blood or even had to deal with their own chickens. As a child, I never thought twice about holding the chickens while they were killed; it was my contribution to the day’s work. The blood was used to make lawar (a mixture of grated vegetables, coconut, spices, chicken meat and offal), as well as tum ayam (parcels of finely chopped meat, mixed with spices and blood, wrapped in banana leaves and steamed).Babi (pork) is another special Galungan food. Some people kill a pig they’ve raised themselves but others, like Gung Rai, just buy as much as they need at the market. She’d usually buy around one and a half kilos to cook for the festival.

There was another dish that this family only made for Galungan: saté lilit—minced meat mixed with shredded coconut and spices cooked on skewers—a far cry from the ubiquitous saté on sale in roadside stalls and tourist restaurants throughout Indonesia. I adored these saté lilit and was torn between wanting to eat them all the time and the realization that it was partly their rarity that made them taste so good. They were also unique because they were prepared only by the men. The two groups of cooks worked in very different atmospheres, located in different parts of the family compound. The men of the family sat on one of the open balé (pavilions), whereas the women always prepared food in the kitchen. 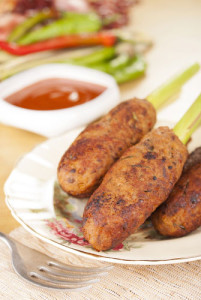 The men went about the saté lilit preparation with what seemed to be so much ceremony, every man with his own specific task. The first in the production line would cut and clean the meat. Then it would be put in a stone mortar to be pulverized into a paste by the next man. Then it was passed on to the grandfather of the family, who was entrusted with mixing all the ingredients together: the meat, the grated coconut and the spices. The spices used included galangal root, turmeric root (which stained everything a bright, indelible yellow), onions, garlic, ginger, coriander seeds, candle nuts and Lombok chillies. Using his hands to knead the mix as if it were bread dough, he’d work it until it was pliable enough to be moulded onto the bamboo skewers and hold its shape. The skewers were then stuck into a piece of banana tree trunk, ready to place over the fire. While the meat was being prepared, an equal amount of energy was devoted to building the fire used to cook the saté, to creating perfect coals. Invariably, this was where all the kids of the family were to be found, especially the little boys, squatting on the ground next to their older brothers, uncles or fathers, watching the flames being fanned.

Meanwhile, I would help the women as much as I could—peeling onions, for example—or just sit and watch; I could never move fast enough to be of any real help to them. And at some point they’d bring out the jaja (cookies or cakes), an act that I’m sure made my entire face light up. Balinese jaja are not to everyone’s taste—some may find them a bit bland, a vaguely sweet biscuit-like confection often dyed in bright colours. They are, after all, only variations on a few key ingredients: rice, flour, palm sugar and coconut, which are then fried or sun-dried to a crisp. But to me they were sublime—and since I could only get them at this time of year, or when they were made to create banten (offerings) for a temple festival—they were extra special. I always debated which two jaja I’d choose when the banten were offered around after temple. Jaja matahari (lit: ‘sun cake’)—round, hot-pink jaja that look like pieces of wrought iron with scalloped edges—were a must. They are moulded using an implement that looks like a branding iron, which is dipped in batter and then lowered into boiling oil, at which point the biscuit unfurls and slips off the mould. Fresh from the pan, they are hard to chew and leave sharp shards in your mouth; after a few days, though, they become gorgeously elastic.

These remained my first choice, but there were others to consider: like the jaja dadalan, folded-over cookies made from puffed rice grains and drizzled with icing sugar; or the jaja uli, thin, crisp wafers, also iced with sugar. There are over sixty varieties of jaja by some counts—some soft and steamed, some crisp and fried. Only a few of these are present during the Galungan preparations—used as snacks to keep everyone going while the main event is being organised and, more importantly, in the offerings made to welcome the ancestors back home. When I asked why only some were required for Galungan, Gung Rai replied that she didn’t really know: “I just know that some are needed for Galungan and that others are made especially for Nyepi [Balinese New Year]. Maybe it’s because the Galungan ones are easiest to make at home and can be prepared far in advance because they keep well. The soft, steamed jaja have to be eaten within a few days.”

But when I asked which ones were specifically required for Galungan and how many of each was needed, she didn’t even have to think about it. The following list just rolled off her tongue: “one kilo of jaja matahari; two kilo of sirat [soft and caramel flavoured]; one kilo of reta [crispy, pink biscuit with serrated edges]; five kilos of dadalan; one kilo of kemplang [pink or white triangular jaja]; half a kilo of ucur [soft sesame-encrusted jaja]; one kilo of satuh [chalky, white star-shaped jaja]; one kilo of iwel [hard, rectangular biscuits made from black rice flour]; two kilos of uli [thin, crisp jaja made from crushed rice grains]; and one kilo of tain tomati [edible, flower-shaped ornaments].”

I knew there were an awful lot of jaja, but I hadn’t realized the quantities were this huge. Looking back, I wonder how I ever had enough space left for the rice and meat dishes, considering how many of these jaja were pressed into my hands as I sat listening to the women talking as they worked. But I managed; I don’t think I could ever pass up Galungan food. There is never a final, grand feast at the end of all this preparation—no formal gathering of seventeen around a table. At this time of year, members of the family just wander into Gung Rai’s kitchen, one by one or in small groups, weary from the ceremony and in need of sustenance. The food just disappears.