Home Culture A Tale of Sand: A Hidden Ecological Struggle in Yogyakarta

A Tale of Sand: A Hidden Ecological Struggle in Yogyakarta

Sand defines the life story of those who live along Kulon Progo’s southern shoreline. Up to the present day, this sand has nourished thousands of souls along the coastal fringe of Kulon Progo regency, Yogyakarta province. The story starts before 1942, when coastal dwellers were already trying to turn the sand into a source of sustenance.

Yet when the Japanese colonisers arrived, the inhabitants were forbidden to use the sand as agricultural land, as the Japanese suspected that they were secretly making sea salt. But after Indonesia was proclaimed an independent nation, as soon as Japan no longer stood watching over the sand lands, a few villagers moved back to once again look for sustenance from the sand. Arjo Dimejo relates that in 1948 President Soekarno made a visit to the coastal strip, and invited the people to make use of the land. So the local people, most of whom were farmers, thronged to work this land whose soil was merely sand.

Those that live from the sand are called cubung, a derisory stereotype which means backward or inferior village people, prone to sickness. And in fact, in past decades, the combination of the sun’s heat and strong blasts of wind meant that many inhabitants experienced diseases of the skin, respiratory system, stomach or eyes.

The coastal dwellers farmed land without soil, only sand, hoping that the rainwater that falls for free onto the earth would make the land fertile; their living conditions were always precarious. Until the 1980s agriculture along the coastal zone remained extremely marginal. All that would grow on the sand were certain vine plants. However, during those years the inhabitants greatly increased their effort to find natural ways for survival. 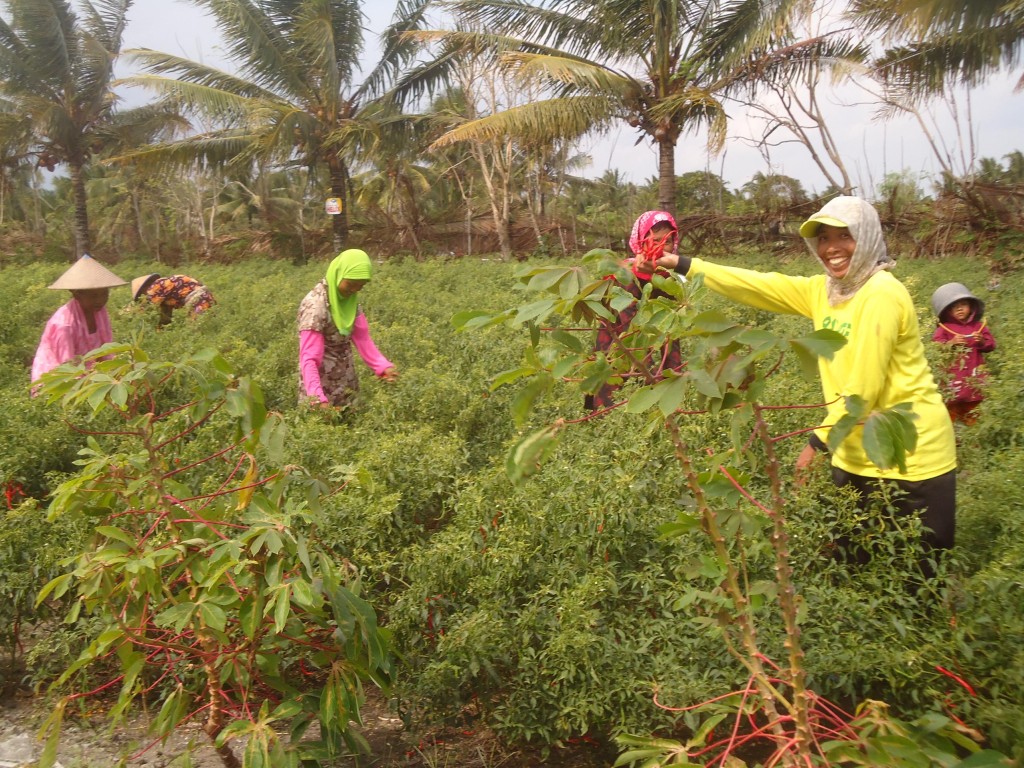 Nearly every evening, the people enjoy Endong-endongan. A custom in which the villagers gather together at neighbors’ houses, and relate their experiences to the others present. According to Iman Rejo, a villager from Bugel, this is their way to strive to fulfil all of life’s needs, whether material or spiritual, and whether they are directly conscious of doing so or not. When the inhabitants meet each evening they create the feeling that they are no longer ‘alone’.

Moments like these are embryos from which the farmers’ motivation grows, the will to persevere and enhance their lives. These ‘endong-endongan’ are meetings of friends and tend to be non-hierarchical, they happen spontaneously yet habitually each evening.

Nightly endong-endongan meetings in different people’s houses create relationships of trust between individuals in these difficult conditions. They start to speak together about the problems they face and look at ways to solve them together. Before each farmer would cultivate the land on their own, but later they felt the need to work together instead, to find new ways of cultivation.

Various ideas emerged from the meetings of individuals and from farmers’ groups to study the nature of the land and the possibilities it offered.

In 1984 a group of farmers helped each other out to build simple wells in the fields. Because sand moves so easily, they dug very wide, with a diameter of up to 5 meters and a depth of 5-8 meters and inserted a tube made from bamboo. The well was completed with a bamboo hoist. As soon as each well was completed, the farmers started to prepare the land: hoeing, building dams, fertilizing with manure, and then later planting. All this technology and land preparation was carried out by the community themselves, working together.

The careful efforts have made the sand fertile enough for chili's

The careful efforts of more than 40 years have made the wasteland a fertile and productive zone. All sorts of plants can now thrive due to the hard work and care put into their cultivation. On the sand a range of horticultural crops can grow in both the rainy season and the dry season. Chilli, aubergine, bitter gourd, castor bean, green beans, rice, corn, watermelon and many other types of vegetables are grown along the 25km stretch of shoreline; the hands of the farmers have turned the landscape green. The key to their success is collective knowledge, whether it be knowledge of modern technology or local wisdom about when and how to plant, tend and harvest the crops.

Businessmen and landowners can also thrive on sand

In 1964, a study analyzing the composition of the sand was carried out by the geology faculty of ITB university. Led by In Junas, it measured the iron content of the sand and ground water depth. They made boreholes in the sand to a depth of 4-7 meters. Some local people were asked to work on this study as manual labor, and they remembered that below the sand lay iron and water, which are the vital part of sand farming. 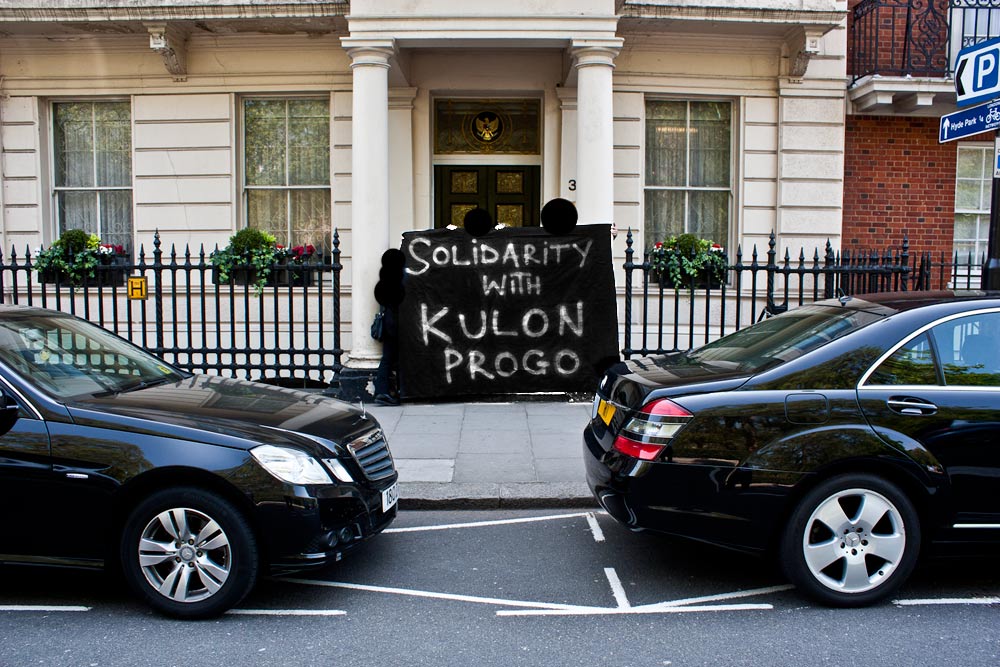 Solidarity with the Kulon Progo farmers

Just as the land started to become fertile, provide food, and even allow farmers to be able to send their children to higher education, was also the moment when a stroke of enlightenment suddenly shook the brain cells of a certain entrepreneur and those that claim authority over the land of Kulon Progo. They want the sand to nourish their needs as well. The partnership they created was given the name of PT JMI (Jogja Magasa Iron).

On Thursday, 6 October 2005, at 20.15 West Indonesia Time, an imaginary voice ripped through the dreams of the farmers. “There is iron within the womb of the sandy shoreline, and it is time for it to come out, to be exploited, to be enjoyed not only by farmers, but by us all, for the sake of our society at large, for the race and for the nation” is more or less how the voice in the imaginary meeting room sounded, a moment before the arrival of a notarized document from PT Jogja Magasa Iron.

Systematic steps have already been taken by the business partnership and those who claim authority over Kulon Progo to ensure the success of their iron mining venture.

At the start of 2007 the shoreline residents were becoming restless about the planned mining project. This nervousness soon spread, as farmers worried about losing the land that had supported them for so long. So one night in April hundreds of farmers, delegates of their groups and villages, got together to determine attitudes towards the plans. It was evident for them that the iron mine would be a threat to their livelihood. All the farmers present that night made their unconditional opposition clear to any plan to mine iron sand from their land.

What does the country eat without farmers?

That night the  farmers established an umbrella organization, which they named PPLP (Paguyaban Petani Lahan Pantai = Association of Shoreline Farmers). The organization had an unusual structure. It is characterized by its consensual and autonomous nature. One more unique feature is that there is no office for either the umbrella organization or for each PPLP unit, as each household along the coast is a space for coordination.

PPLP henceforth started organizing many actions. Initially they undertook traditional forms of struggle, involving old and the young in local traditions such as mujahadah, casting magic spells, farmers’ rituals and night watch on the land. But neither their attempts at dialogue, nor their movement which declared itself anti-mining was considered well behaved by the corporations or the local government.

The farmers actions and demonstrations continue until now. The case of the farmers’ resistance in Kulon Progo is an authentic example of a struggle against power characterized by anti-politics, autonomy and self-management. Between the sand and the iron it contains there is a raging fire, a fire that cannot be subdued, resisting exploitation and dehumanization in whatever form it takes.

(Since 2010 there have been solidarity demonstrations for the farmers struggle in front of the Indonesian embassy in Britain and Australia due to the involvement of Australian Kumberly Diamond and other foreign investment).