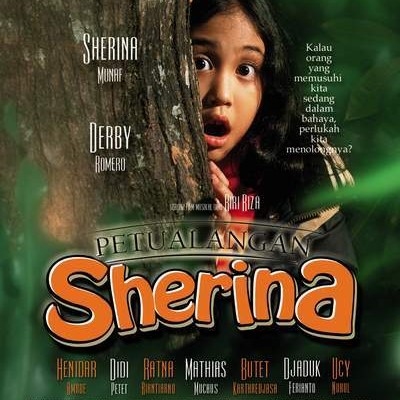 Indonesian cinema seems to mirror developments in Indonesian society. During colonial times most movies had Dutch involvement on one level or the other. Then, during the Sukarno years,  the newly gained independence added a nationalistic and anti-Western tinge to most movie productions. Foreign films were even banned! During Suharto’s reign, censorship gave filmmakers a tight rope to walk on, but also spurred a lot of creativity. After reaching its peak in the 80s with the likes of Catatan Si Boy (Boy’s Diary), Nagabonar, and Warkop Trio’s comedy, Indonesian film industry died down over the following decade. This was mainly due to the fact that foreign import of films resumed. Indonesian cinema had no answer to the sudden competition. As a consequence, flicks made in the 90s are mostly adult movies of poor quality. Filmmakers and fans often refer to this as the Krisis Film Nasional.

What happened afterwars and what is the status of Indonesian cinema now? Reza Daffi made a huge bowl of popcorn and explored…

Indonesian Cinema, its Highs and Lows

1999 was one of the worst year ever for Indonesian cinema, only 7 national productions were released in that year. In 2000 even less movies were produced: a mere 6 in total! The popularity of counterfeiting, cheap television dramas and strong international competition hollowed out Indonesian cinema to an all time low. 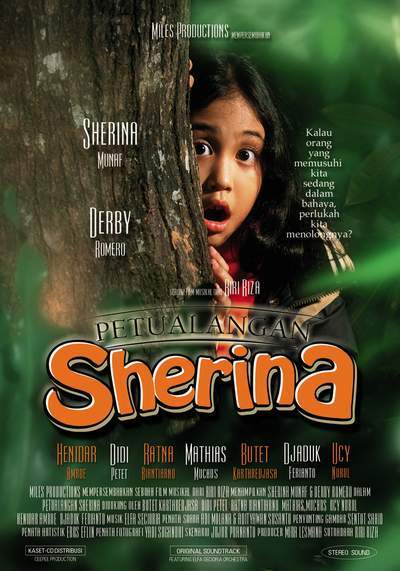 Things finally changed when director Riri Riza and producer Mira Lesmana created a breakthrough movie entitled Petualangan Sherina (Sherina’s Adventure) featuring the greatly talented then-little girl, Sherina Munaf. The family film managed to lure people of all ages to the movie theaters—something that had not happened for a very long time. This occurred in the year 2000 marking the new era of Indonesian cinema.

Since then, Indonesian movies have been constantly released in the country and the number is ever increasing. From about 6 movies in 2000, last year’s production reached over 80 titles.

Based on the data compiled by Wikipedia, 418 or so movies were released throughout the last decade, of which roughly 40% are either comedy, horror, or a mix of them.

It is not all bad news, there are indeed good films. Comedies like Jagad X Code (Life in Code River) turn out to be really funny and amusing. And the scare in 2001 horror Jelangkung (The Uninvited) is enough to freak people out. But then, the drollery and ghost theme can get banal.

Indonesian production houses have seemed to follow this vogue blindly. While giving the audience more options would obviously be a better way to develop the country’s cinema, economical considerations have driven many filmmakers to do the opposite.

As a consequence, tacky scripted, badly executed horrors and comedies carry on mushrooming on the theaters screens—albeit often with hilarious titles like Cin… Tetangga Gue Kuntilanak (Love… My Neighbor is a Motherghost) and Maling Kutang (The Bra Thief).

In Indonesia, it seems that sensual content is the quickest path to making money out of a movie, focusing more on the voluptuousness  of the main character, than the story or the aesthetic. And because this X + Factor promises more financial gain, adult movies ‘disguised’ as comedies, horrors and action flicks are a plenty these days. 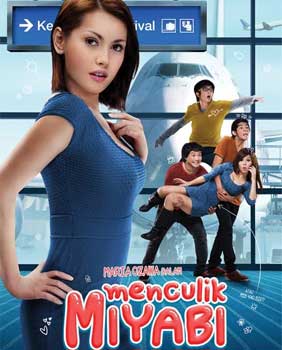 While artistic content or creativity need to be taken lightly, oftentimes what makes a these kinds of film a hit is its controversy. Tali Pocong Perawan (The Virgin Corpse), out in 2008, and horror-comedy Suster Keramas (The Shampooing Nurse) in 2009 are perfect examples that lead to plenty of discussion (and hence exposure), related to its vulgar content. They, nonetheless, did not fail to attract huge numbers of viewers.

January 2011 has seen the release of horror Arwah Goyang Karawang (The Ghost of Karawang Dancer) that features two bombshells Julia Perez, aka Jupe, and Dewi Perssik, aka Depe. Funnily, the movie provoked hullaballoo weeks before the release following its scene of a “real fight” between Jupe and Depe. The title “Karawang” also received protests from the people of Karawang (a regency in West Java) for giving a bad impression of their culture, resulting the film to change its title into Arwah Goyang Jupe-Depe (The Ghost of Jupe-Depe Dance). 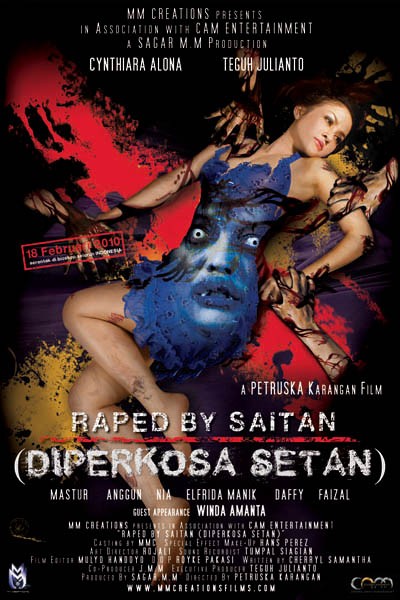 One the most ridiculous titles and movies however must be Diperkosa Setan (Raped by Satan), which uncompromisingly defies all levels of taste.

Maybe to counter the +18 rated films, Indonesia is by no means short of religious movies. Looking back ten years ago, you can find a wide array of flicks that take up subjects concerning religion. Some try to advocate Islamic teachings, others seek to merely integrate Islamic viewpoint is romance or comedy.

Lower-class life drama Rindu Kami Padamu (Of Love and Eggs), romance Ayat-Ayat Cinta (Verses of Love), and interreligious and interracial romance Cin(T)a (the title being an amalgation of cinta ‘love,’ ‘Cina,’ the name of the lead character and the capital T referring to Tuhan, God) are a few examples. These religious films often have strong moral codes attached to them and seem very popular among families.

Indonesia also has its fair share of musicals, such as Opera Jawa (Requiem from Java), action flicks like Merantau (Merantau Warrior) and Madame X, war themed movies like Singa Karawang-Bekasi (The Lions of Karawang Bekasi) and Merah Putih (Red and White), biographical stories like Marsinah—a woman labor—and Sang Pencerah (The Enlightener), documentaries such as the one of the legendary band Kantata Takwa, slashers such as Psikopat (Psychopath) and Ruma Dara (Macabre), thrillers like Pintu Terlarang (Forbidden Door), and sport movies like Garuda di Dadaku (Garuda on My Chest). 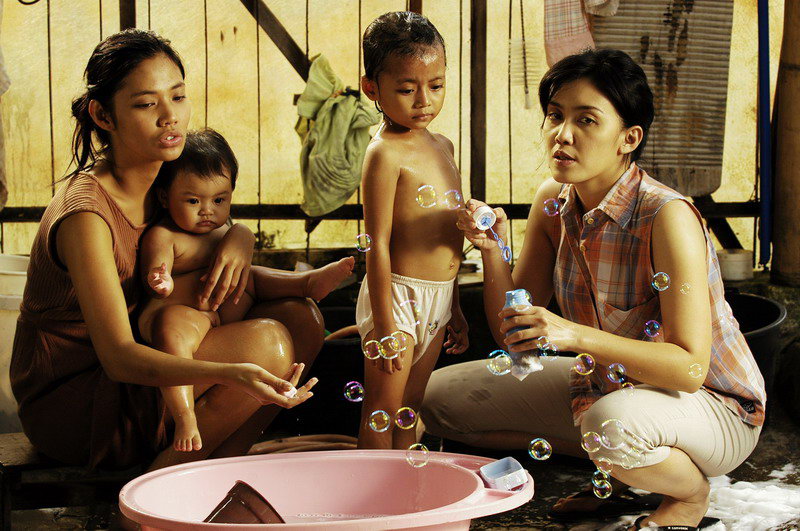 Some moviemakers have experimented with the setting, e.g. Under the Tree is set in Bali and Karma has Chinese culture and family as background, whereas prevailing subcultures such as punk, like in Realita, Cinta, & Rock ‘n Roll (Reality, Love, & Rock ‘n Roll) and Punk in Love, and traditional Islamic boarding school life, like in 3 Doa 3 Cinta (Pesantren: 3 Wishes 3 Loves), have also emerged in several works.

There are other kinds of movies that can be considered novel in Indonesia. Among them are the so-called Indonesian Blair Witch Project Keramat (Sacred) and the first long animated movie Meraih Mimpi (Sing to the Dawn). Both came out in 2009.

Appreciation should go to Jermal (Fish Trap), a film about underaged workers in an isolated fishing place in the middle of the sea, and Tanah Air Beta (My Homeland), a family drama set near the border of East Timor and Indonesia, for portraying issues that are rarely touched upon by others.

Dian Sastrowardoyo, Luna Maya, Nicholas Saputra, and Lukman Sardi, to name just a few, have rocketed to fame as icons of today’s Indonesian actors. At the same time, Riri Riza, Rizal Mantovani, Rudi Sujarwo, Nia Dinata, Joko Anwar, Garin Nugroho and senior Dedy Mizwar have proven themselves to be quality directors. Together, they represent some of the most prominent exponents of this new era.

Finally, it’s time to watch some goodies. Below are 10 films that, I think, set the benchmark of quality post-2000 Indonesian movies. To be noted, it may be quite difficult for people abroad to see these movies unless they come to a film festival. Similarly, while some movies can be purchased online (e.g. some Garin Nugroho’s films on Amazon), chances are it is not easy to get the original copies unless you ask a friend in Indonesia to buy some. If you have a chance to acquire these films, no worries, the originals usually come with English subtitles.

A portrait of adolescent life as friendship, love, and family matters come into conflict.

Based on the life of Soe Hok Gie, an Indonesian student activist of Chinese descent who died in 1969, this political movie is beautiful.

5.      Berbagi Suami (Sharing a Husband)
A multi-plot film about polygamy.

In a remote area of Papua, a boy tries to make his way to proper education.

When good old values clash with the new ones. When patriotism collides with global capitalism. This film is as funny as it is touching.

Crime, gore, thriller, and horror in one package, spiced up with some elements of superstition.

Life in pesantren told without being overdramatic or pretentious. This may be a good movie to help you understand complex Indonesian Islam.

The exquisite culture of Bali serves as the setting for a drama involving three women, each having their own problems.