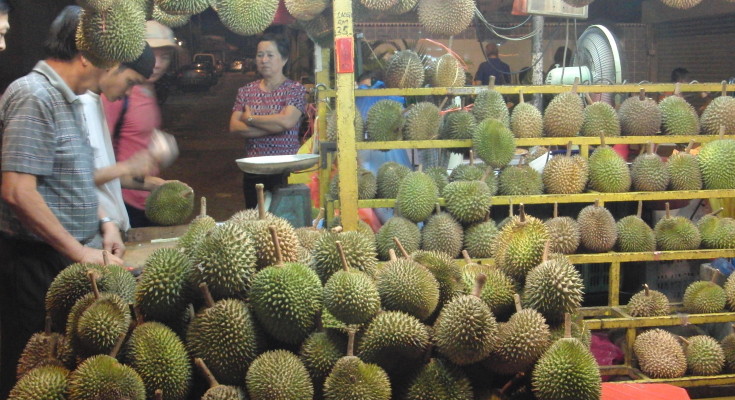 A Durian Trip to Malaysia 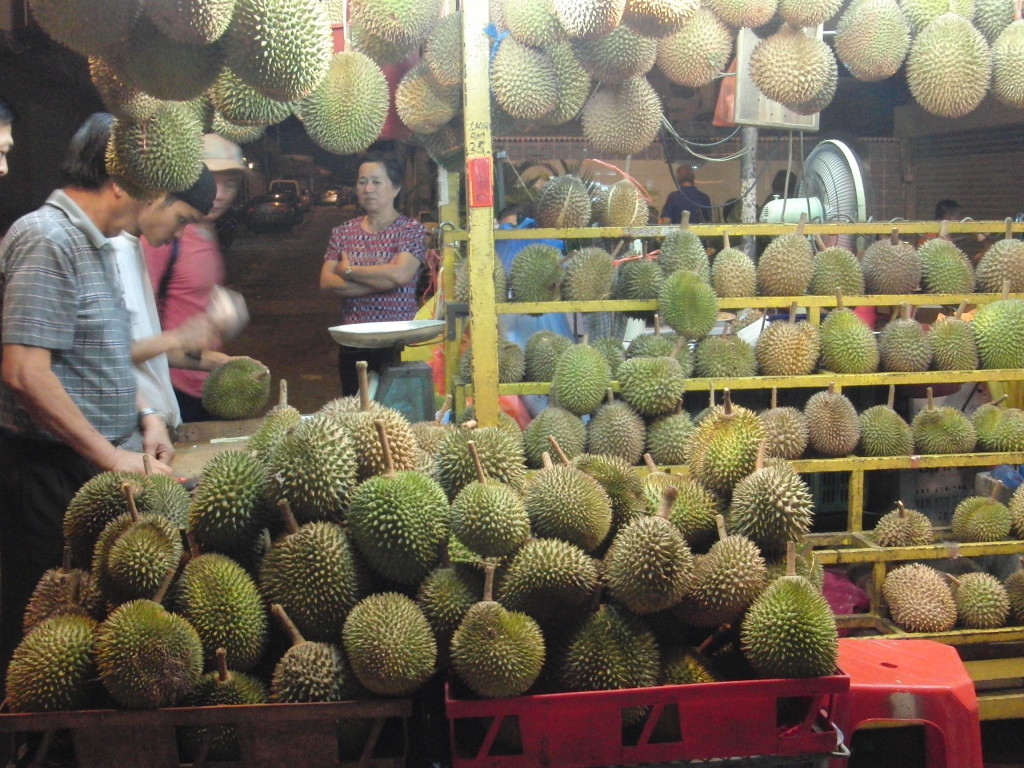 While Malaysian durian is gaining popularity in (Southeast) Asian countries, it is rather unknown in Europe. Only recently, I became aware that Indonesia and Thailand are not the only durian walhalla’s. Thanks to an Indonesian friend who is an avid durian lover, I lent myself to temptation to make several days transit in Kuala Lumpur en route to Indonesia and to taste the Malaysian durian early November, while durian season is usually June until August. Nevertheless it was an unforgettable durian experience!

The first place I tried my luck to find Malaysian durian was in Jalan Alor night market in Bukit Bintang (Kuala Lumpur). The market is perfectly situated in the vicinity of popular tourist hotels. It was only ten minutes walking from the hotel where I stayed with 5 other friends. Our fear of missing the durian experience immediately disappeared when we smelled the (in)famous odour before even seeing the fruit. Not being able to suppress our desire after hearing enticing stories about the Malaysian durian, we literally followed our nose to the first durian stall in Jalan Alor. Fortunately, there was still plenty of the gorgeous fruit. We could choose of at least 6 different clones, of which I saw the names indicated in Chinese characters and in D numbers: Mao San Wang (Cat Mountain King), XO, Udang Merah (Red Shrimp), D101, D24, D2, D99. My Indonesian friend ordered 2 Mao San Wang, 1 XO and 1 D24 for us. I had no idea what to expect of their specific taste and didn’t know any of the three types.

The name durian is derived from the Malay word duri (thorn) together with a suffix –an, referring to the thorn-covered husk of the fruit. The durian belongs to the genus Durio. There are at least 9 edible Durio species of which Durio zibethinus is the only species commercially cultivated on a large scale in its native regions (Indonesia, Malaysia) and Thailand. After Thailand, Malaysia has been the most successful country in producing numerous cultivars by cloning and cross breeding. Most cultivars have a common name (i.e. Mau San Wang) and a code number starting with D (D197).

How to pick the Durian that suits your taste?

You need to be an expert to choose the mature and fresh durians. If you are not, let the seller make the choice. Sellers often shake the durian to prove that the fruit is still turgid and holding on to the inside of the shell. Older durian is believed to have drier fruit, which is separated from the shell. Some sellers also look at the stalk: the greener and fresher the stalk, the fresher the durian.  Our seller chose and opened the durian before our eyes. 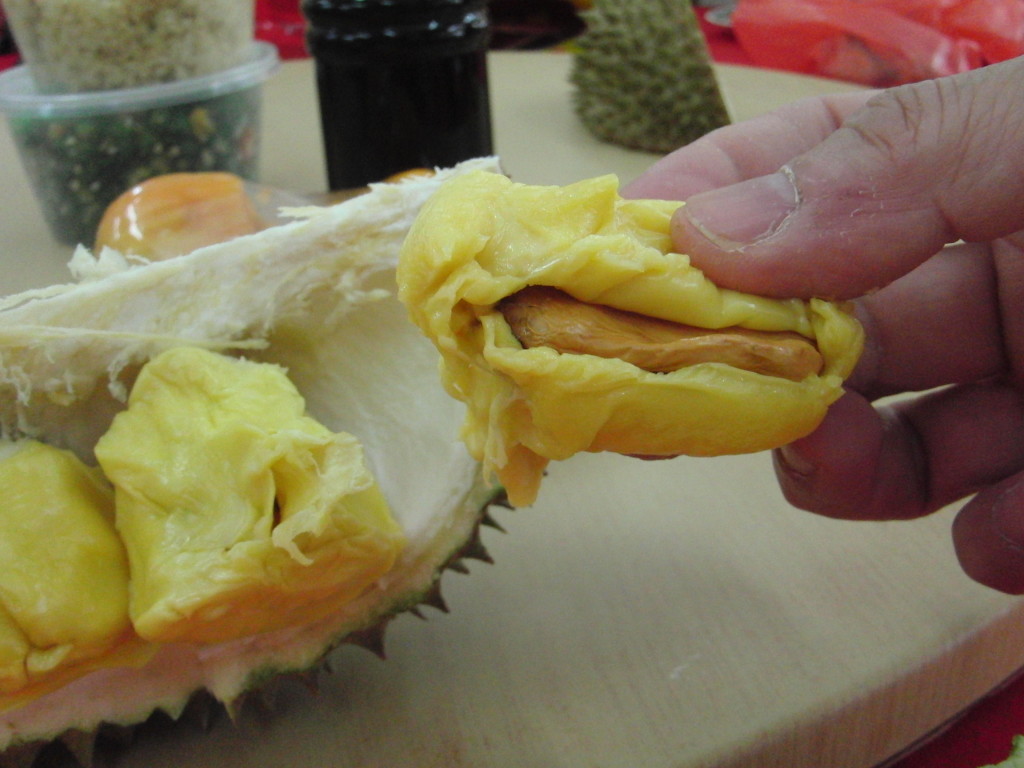 The aril of the Mao San Wang is orange-yellow of color, thick and has small, flat seeds. It should be dry on the outside, but creamy, soft and sweet on the inside.  My friend was not entirely satisfied with the Mao San Wang we bought, because the flesh was not dry enough on the outside, a bit watery.  For me, after years of only consuming imported durian often too long kept in frozen form, the Mao San Wang was surpassing all expectations, as were the XO and the D24. The XO and D24 are very much alike in color: both are pale yellow. The difference can be found in the texture of the aril. While the aril of XO durian is soft and loose, the D24 has a soft but firm aril.  Both XO and D24 have bigger, round shape seeds.

According to my friend there is a clear difference in flavour between the three types. Mao San Wang is sweet like custard with a weak mocha flavour, while the XO and D24 are sweet with a slight bitter taste. The XO is easy to recognize because of its slightly stronger alcoholic flavour (indicated by its name).  To be able to detect the differences in taste, one should be a regular durian consumer. It is comparable to wine tasting: one doesn’t become a master after one glass of wine.

My second chance to taste the Malaysian King of the Fruits was on the way to the Genting Highlands. My friend brought us to a place called Gohtong Jaya (named after Lim Goh Tong, a wealthy Malaysian Chinese businessman who helped transform Genting Highlands from an unexplored hilltop into one of the world’s most successful casino resorts) with excellent restaurants and fruit stalls. Also this time we were very lucky to find plenty of durian. Since Mao San Wang was our favorite, we ordered 4 fruits, which turned out to be perfect this time: dry on the outside and sweet, creamy and aromatic on the inside!

People in Southeast Asia consider the durian to have warming properties, which could cause high blood pressure, stomatitis aphthosa (sores in the mouth), gastritis and a sore throat after excessive durian consumption. Although there is still no proof of these ill effects of the durian, some of my friends, including myself, ended up suffering gastritis and sore throat, which in my case ended up in influenza. Seen from the amount of durian we consumed in two successive days, I believe we were over the top in consuming the king of the fruits. We should have limited ourselves to half the amount, knowing this was the first acquaintance with fresh durian after many years. Despite the less pleasant end of our durian trip, I had no regrets and would like to do the same trip over and over again.

To learn more about durian, read: