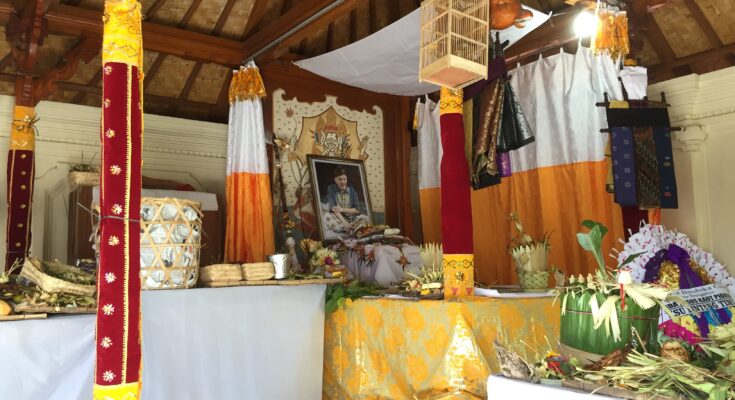 A Balinese cremation in Covid style 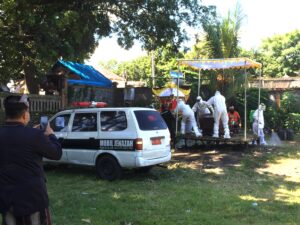 Bali is well-known for its ostentatious cremations. In my husband’s Brahman family originating from the sleepy town of Klungkung most members are cremated within a few days after they have passed away. It is a matter of pride: a confirmation of the family’s high caste status. I was therefore not surprised that of late the family did its utmost to make a cremation possible, even though the deceased was diagnosed with Covid after death. Curiously not yet diagnosed when entering the hospital where he died, which raises an awkward question. That his cremation be staged was all the more imperative, because 88 year old kakiang was a famous dancer until late in life, known by everyone in the family, and, on top of that, the last male descendant of the twelfth generation of the family since it settled in Klungkung.  No way, we could avoid going to this cremation of such a prominent relative. Fortunately, we had received our second sinovac vaccination a month earlier, so were not so reluctant to attend a ceremony as before. I also wanted to go, because kakiang had always lifted my spirits by thanking me repeatedly for my assistance in helping his daughter to get a divorce many years ago. And to be honest, I was very curious about the proceedings. It had to be different from a normal cremation. The pictures are situated below.

The first difference was that – of course – the body could not be brought into the family compound.  This hurdle had to be overcome, because the ritual of washing a corpse is always preceding a cremation. The solution was found in using a wooden effigy of the deceased. We arrived in Klungkung at 10 o’clock in the morning, based on experience the usual time for the washing of the corpse. Unfortunately, this part of ceremony was already over, so I lost the chance to see the effigy itself. A lay priest (pemangku) and many others were about to put the many prescribed offerings on top of its coffin and around it on the floor. A large upper-body photograph of an aged kakiang wearing an udeng – headdress for men–  looked at me from behind the coffin (photograph no. 8913). It immediately struck me that the size of the effigy’s coffin was not commensurate with the size of an adult human being: it was much smaller.

After the large gathering of relatives – my guess over 200 people, quite a few not wearing a mask appropriately – had prayed for his soul, the coffin was carried down the stairs out of the compound and placed it in the cremation tower standing ready on the main street of Klungkung. Usually all relatives accompany the tower on foot to the cremation site (setra), a hot walk of about twenty minutes uphill around noon (photograph 8917). This time the procession was less impressive because large gatherings are forbidden by the government for fear of adding the number of Covid infected people. To forestall this, many informal security officers – pecalang – and a few police officers were present. About half of the relatives, including myself and my husband drove by car to the cremation grounds. Remarkably, no security was present there, so everyone sat in the large open structure or elsewhere chatting without caring about social distancing.

Upon arrival at the setra, the effigy’s coffin was lowered from the cremation tower and placed in the simple structure erected for the cremation (photograph 8920). After some time, two cars belonging to the Special Unit for Covid Disaster Management drove into the cremation grounds, spilling out five men completely covered by the common Covid protection uniform (photograph 8923) (Not much later an ambulance arrived bringing the corpse of kakiang in a closed coffin, which was then carried by these men to the cremation structure (photograph 8931). No one was allowed to come near and – sadly – the usual ritual for the deceased when lying in his open coffin had to be omitted. Interestingly, the smaller coffin of the effigy prettily covered in red velvet and adorned with gold plated ornaments and colorful sequins was not removed, but placed on top of the bare wooden larger coffin holding kakiang’s remains (photograph 8935). After thoroughly spraying the cremation structure and the area surrounding it (photograph 8937), the Covid team departed and the professionals in charge of igniting the fire carried out their duty. In no time the blaze swallowed the two coffins (photograph 8945). I am sure, that kakiang would have been pleased with the way the family made his cremation as complete and beautiful as possible under the circumstances and certainly no less with the large turn-out of relatives who paid him their last respects.

I wondered whether the use of an effigy has become more common in Bali during the epidemic. A friend told me, that it is an expensive affair and that In Ubud, where she lives, only the Cokorda (royal) family makes use of the above procedure. Remains of others who have died of Covid are directly brought to of the two cremation grounds assigned for this by the government. I also wondered whether the use of an effigy replacing a deceased actual corpse is a new invention induced by Covid. My husband told me it is not. He remembered that an effigy was used before at the time of the cremation of a number of male relatives who had been abducted and murdered by the military in early 1966, because they were considered having communist sympathies. The remains of one of them had not been found by the family, so when years later the family finally had the means to cover the costs of the cremation for all of these men, this person was sent off to the Other World in the form of a carved wooden puppet. 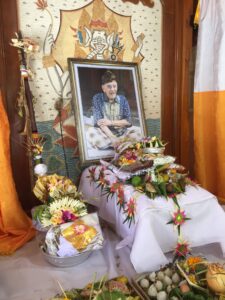 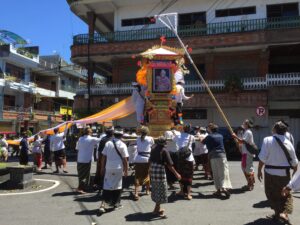 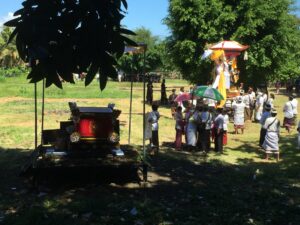 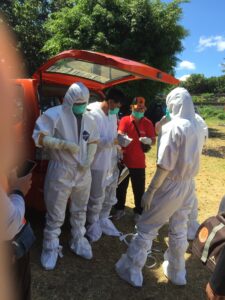 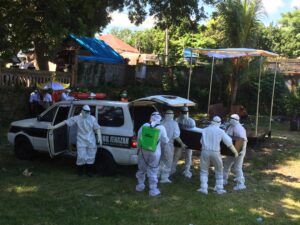 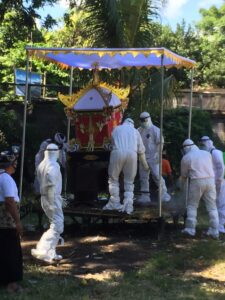 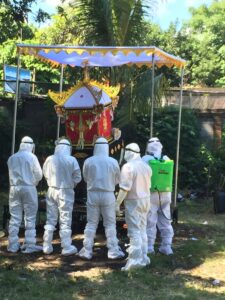 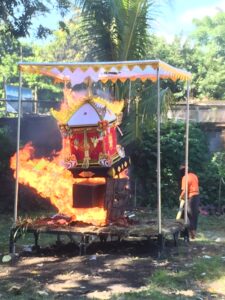