Home Culture “I’ll buy anything I can sell”: Trading Scrap in Central Jakarta 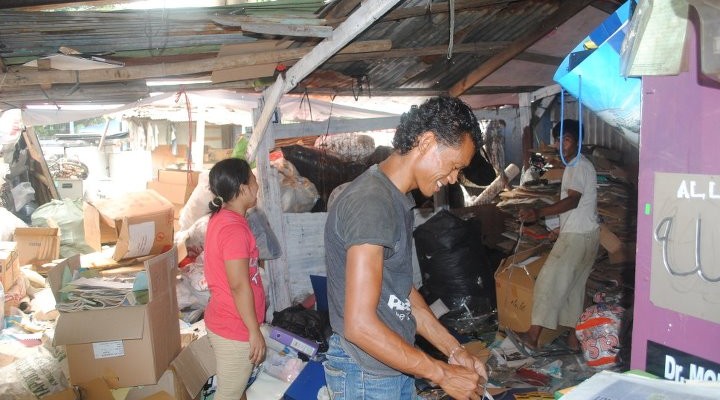 “I’ll buy anything I can sell”: Trading Scrap in Central Jakarta

Jakarta’s Kuningan district is well-known for a number of reasons: its preponderance of foreign embassies and office towers housing multinational corporations, its luxury malls and, perhaps most notoriously, as the location of the JW Marriott and Ritz-Carlton hotels, the sites of two recent terrorist bombings. Amidst the area’s large swathes of land walled off for future construction and enervating traffic jams, there is perhaps no better place in the country to see how fast Indonesia has been developing in the past couple of years. That this neighborhood might also contain a cul-de-sac almost entirely made up of small-scale scrap businesses might surprise a lot of Jakartans. 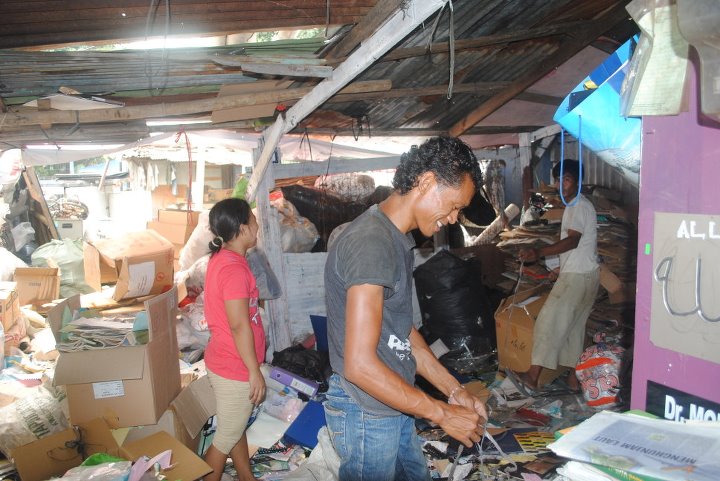 Trading scrap for a living, By: Adam Mele

On a damp Saturday afternoon in  February, Bapak Sobari, the proprietor of a small scrap yard located in between the newly extended parking lot of the Ambassador Mall and a Shell Station  that used to be a carpet store a couple of months ago divides his attention between a sun-bleached back issue of a popular Islamic magazine and his children, a rowdy group of three temporarily stunned by the sight of a white person. Two of his workers sit smoking, distractedly watching a pop band perform on TV. Everyone is wearing sarong, which could mean that they just finished praying or just woke up. Either way, they probably don’t have any immediate plans for the day.

Sobari has been in the scrap business for ten years by his estimate. Originally from the island of Madura, he got his start in the industry when an uncle, the owner of a larger yard in the Tanjung Priok port area, called his family asking if any of their children needed work. The next five years were spent pushing a cart around the city,  known more for its heat and pollution than anything else, collecting scrap wherever he could, constantly “studying”, keeping an eye on what sold and what didn’t. At the age of 25, he returned home for a marriage arranged by his family, quickly returning to Jakarta with his new wife in in tow to run the yard he’s at now.

“I’ll buy anything I can sell”: Trading Scrap in Central Jakarta

Of the hundreds of ethnicities in Indonesia, the Madurese don’t fare particularly well in terms of stereotypes. To many, they are seen simply as uncouth religious fanatics with hair-trigger tempers, born on a small island whose only commodity of note is salt and forced to seek a living elsewhere as a result. Of the approximate 10 million of ethnic Madurese in Indonesia, only about 6 million live on the island itself. Perhaps unsurprisingly, they are also considered hard workers. To this date, their name is virtually synonymous with the Indonesian scrap industry. 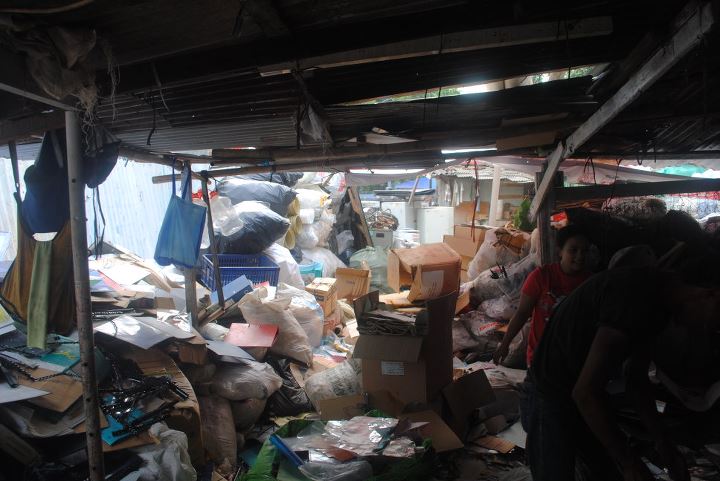 Junk to some, a source of income for others, By: Adam Mele

Lately, business has been slow at Sobari’s yard. A typical day might consist a couple of trips made by truck to the surrounding offices to see if there’s anything that needs hauling away. Although the previous day had involved a profitable trip buying paper from the Russian consulate, nothing steady seemed to be coming their way. One of Sobari’s workers makes a couple of hints that I might want to invest with them.

“I’ll buy anything I can sell.” Sobari tells me, though he makes it clear that -not unlike many involved in the scrap industry- he prefers copper over everything else. When I first met him in 2010, he could sell a kilogram of copper for about 40,000 Indonesian Rupiah (app. US $4). Aluminum is now going for Rp. 10,000, steel for Rp. 2000, and cardboard  and paper for Rp. 1500. Collectors also keep an eye out for anything from oil paintings to broken TV sets that might have resale value at local markets.

His crew consists of about a half dozen members of his extended family sent from Madura in the same manner he was. Their duties may involve anything between sorting different colors of plastic bags –though this is generally women’s work- to pulling a cart through the hot, polluted Jakarta streets searching for anything that might have resale potential. Collectors generally receive approximately 60% of the profit on anything they collect as commission.  Although their wages are low even by Indonesian standards, they’re given free board on premises.

Small-scale scrap collectors in Indonesia normally don’t sell directly to factories, but instead to independent suppliers who serve as a conduit between the two. Each supplier tends to focus on a specific material, like copper, paper or aluminum, and, spends much of his time cultivating relationships with factories in the Jakarta suburbs. They tend to work on a non-exclusive basis with collectors throughout the city; even a yard as small as Sobari’s might work with a few dozen over the course of a year. 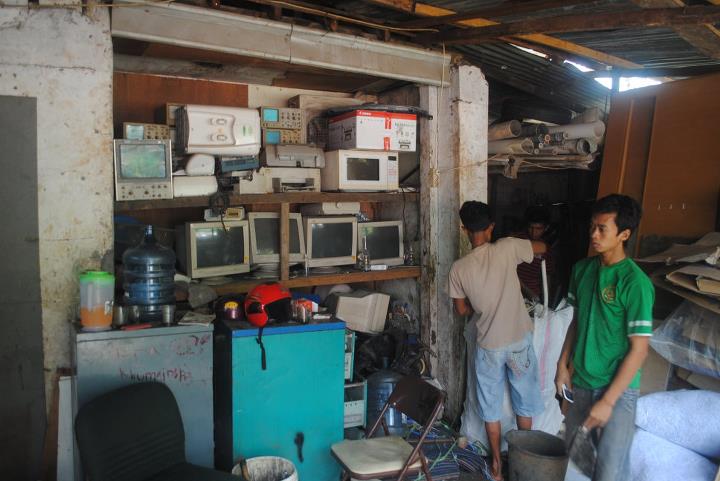 A deal will generally begin with a factory calling a supplier asking if he can fill a particular order (ie. 20,000 kg of paper). The suppliers will then call yards around town until this is fulfilled. The percentage of the profit the supplier asks for depends on the material. While paper might only net him about Rp 20 per kilogram (2 cents, 1.3 %), copper can go as high as Rp 1,500 (15 cents, 3.75%).

If business is slow, overhead can run high on a yard like Sobari’s. Rent in an area like Kuningan can run between fifteen and twenty million rupiah, even for a relatively small space. Although a lot of collection can be done using carts, trucks are a necessity, and, without ownership, renting can be an easy way of accruing debt. Many get involved in side businesses -pigeon farming and scaffolding rental were two I saw- to help make ends meet.

In addition to this, Sobari’s life is bound by a number of traditional duties. Family plays an important role in Madurese culture. He is duty-bound to return to his village at least once a year, preferably during the Idul Fitri holiday season, and send at least a portion of his monthly income back home. As a devout Muslim, he must also give another portion to a local mosque to be further divided as charity.

Before I leave, Sobari ducks inside the room he shares with his wife, children and mother, to retrieve his clurit, a sort of hand-held scythe given to most Madurese men before they leave their village.  The possession of and ability to use a clurit is a matter of pride among the many making a living off the island. In order to properly use a clurit, one must first be schooled in an esoteric, semi-mystical martial art specific to Madura. As a symbol, this farming implement turned weapon is triply potent: of where one comes from, of defending what one has and of providing for one’s family.