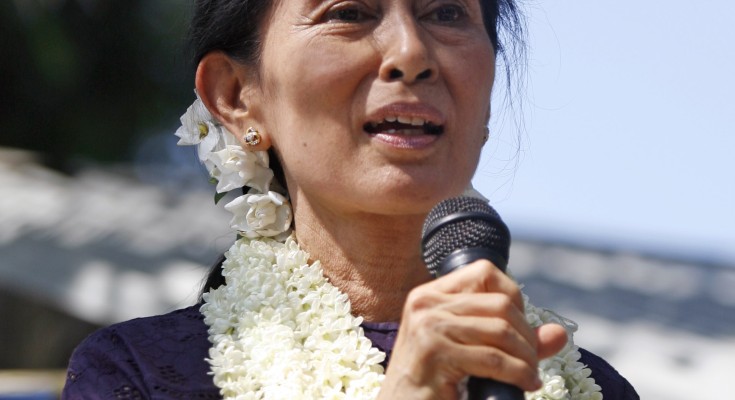 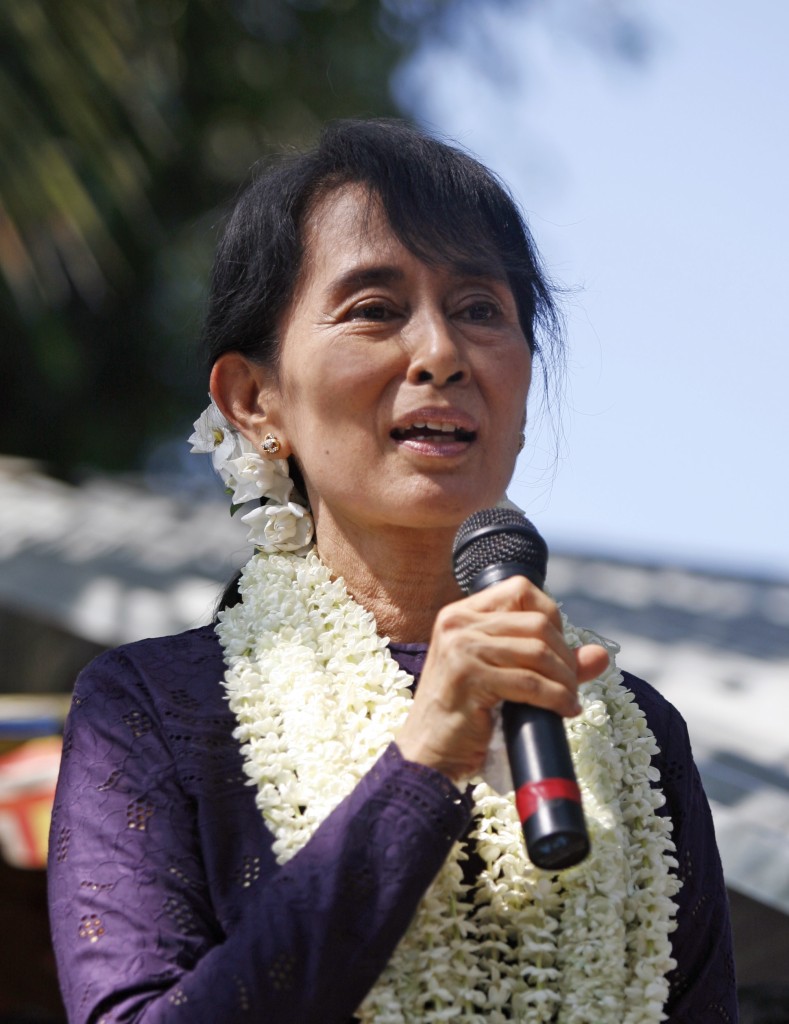 Aung San Suu Kyi is without a doubt the most iconic Burmese politician. As the Chairperson and General Secretary of the National League for Democracy (NLD), she has been described as charismatic, dedicated, inspirational, courageous and stubborn. She was born on 19 June 1945 in Rangoon and is the third child and only daughter of Aung San (father) and Khin Kyi (mother). Her father founded the modern Burmese army and negotiated Burma’s independence from the British Empire in 1947. He was assassinated by his rivals in the same year. He’s still held in high esteem. Her mother was appointed Burmese ambassador to India and Nepal in 1960.

Aung San Suu Kyi grew up with her mother and two brothers. One, Aung San Lin, drowned when he was eight. The other, Aung San Oo migrated to The United States. After Aung San Lin’s death, the family moved to a house by Inya Lake, where she still lives today. Aung San Suu Kyi is a Theravada Buddhist. She was educated in Burma, India and the UK. She obtained a B.A Degree in Philosophy, Politics and Economics in 1969. She worked for the United Nations for three years. In late 1971, Aung San Suu Kyi married Dr. Michael Aris. In 1972 and 1977 her sons Alexander and Kim were born. Between 1985 and 1987, she was working towards an MPhil in Burmese literature in London. For two years she was a Fellow at the Indian Institute of Advanced Studies in Shimla, India. She also worked for the government of the Union of Burma.

Her career in politics started in 1988 when Aung San Suu Kyi returned to Burma. She went home to tend to her ailing mother but ended up leading the pro-democracy movement. 1988 was the year of the massive, but peaceful student protests against the generals who, after a coup in 1962, ruled the country with an iron fist. The military smothered the protests in blood. Influenced by both Mahatma Gandhi’s philosophy of non-violence and by Buddhist concepts, Aung San Suu Kyi entered politics to work for democracy and helped found the NLD on 27 September 1988. She was put under house arrest on 20 July 1989. She was in fact offered freedom if she left the country, which she refused. One of her most famous speeches was ‘Freedom from Fear’, which began: “It is not power that corrupts, but fear. Fear of losing power corrupts those who wield it and fear of the scourge of power corrupts those who are subject to it.” She also believes fear spurs many world leaders to lose sight of their purpose. “Government leaders are amazing”, she once said. “So often it seems they are the last to know what the people want.” 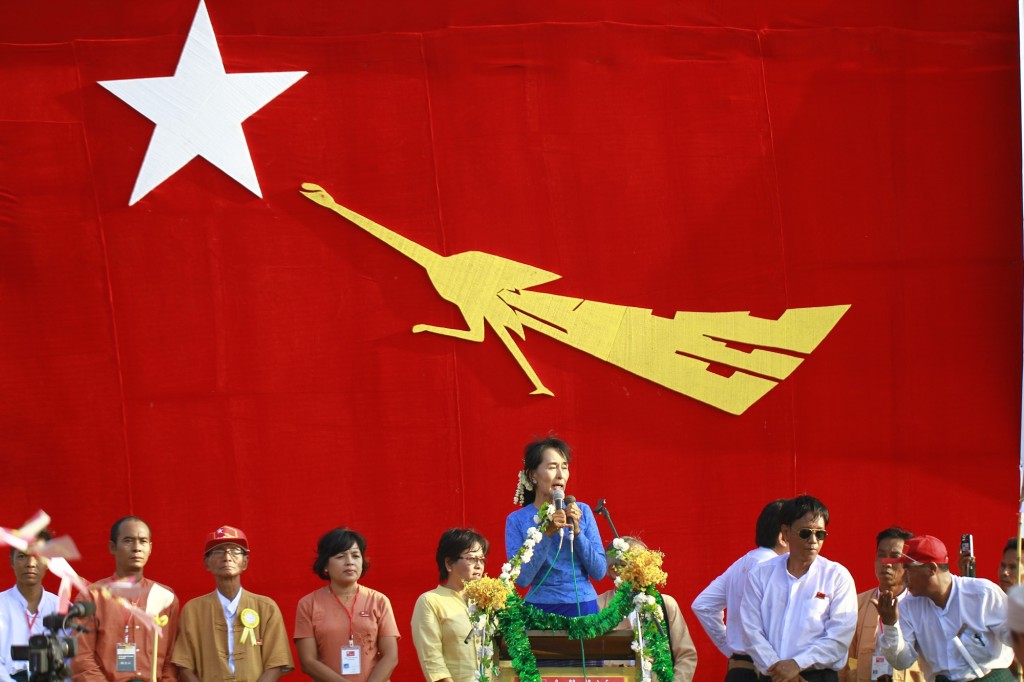 She challenged the authorities, but at the same time she was to a certain extent ‘protected’ by her status as the daughter of Aung San. The military didn’t want another martyr.

The military tried new tactics with the subsequent 1990 general election. The NLD won 59% of the national votes and 81% (392 of 485) of the seats in Parliament. The generals never acknowledged the outcome of the elections. Aung San Suu Kyi had, however, already been detained under house arrest before the elections. She remained under house arrest in Burma for almost 15 of the 21 years from 20 July 1989 until her recent release on 13 November 2010, becoming one of the world’s most prominent political prisoners.

One of the prizes she was awarded was the Nobel Peace Prize in 1991. The statement of the Nobel Committee read: “The Norwegian Nobel Committee has decided to award the Nobel Peace Prize for 1991 to Aung San Suu Kyi of Myanmar (Burma) for her non-violent struggle for democracy and human rights. …Suu Kyi’s struggle is one of the most extraordinary examples of civil courage in Asia in recent decades. She has become an important symbol in the struggle against oppression… In awarding the Nobel Peace Prize for 1991 to Aung San Suu Kyi, the Norwegian Nobel Committee wishes to honor this woman for her unflagging efforts and to show its support for the many people throughout the world who are striving to attain democracy, human rights and ethnic conciliation by peaceful means.” Oslo, 14 October 1991. On 16 June 2012, Aung San Suu Kyi was finally able to deliver her Nobel acceptance speech at Oslo’s City Hall, two decades after being awarded the peace prize.

Things are slowly changing in Burma. The military has embarked on ‘a road to democracy’. In 2010 elections were held and in 2012 by-elections. Many political prisoners have been released and the freedom of the press significantly improved.

The headquarters of the NLD, By: Diana van Oort

The political landscape of Burma isn’t as clear cut as it seems. The Military and the NLD are the big powerhouses well known by the public, but one third of Burma’s population consists of minorities. Some work together with the NLD, others have founded their own political parties (stimulated by the military who seek to use the time-tested strategy of divide and conquer). In order for the democratic system in Burma to work, all parties have to find ways to work together and respect each other.

Although the West has by and large linked its stand on Burma to Aung San Suu Kyi (a morality play on being tough on human rights, some say) as in a true democracy, there are other points of view. The NLD decided not to participate in the 2010 elections. Nonetheless, some senior members have formed the National Democratic Force to take part in the elections, claiming that a boycott would play into the hands of the government. The National Democratic Force also appealed for an end to Western sanctions, and this appeal was echoed by all of the independent and ethnic-based parties that participated in the elections. The sanctions have affected ordinary people to a much greater deal than the intended punitive effect it had on the military regime. It also gave the Chinese a chance to muscle in, to create their pathway to the sea of Bengal and use Burma as a market, by developing the poor southwest part of the country. In Burma there’s uneasiness about these developments. Aung San Suu Kyi’s NLD disagreed. They have argued that sanctions are the only card left to play in any future discussions with the new government.

The United Nations and Western countries have condemned the 2010 elections as fraudulent.

Discussions were held between Suu Kyi and the Burmese government during 2011, which led to a number of official gestures to meet her demands. In October, around a tenth of Burma’s political prisoners were freed and trade unions were legalized. The 2012 Burmese by-elections were held on 1 April 2012. The NLD was re-registered for the by-elections on 13 December 2011. Aung San Suu Kyi ran in the seat of Kawhmu, which she won and her party won 43 of the 44 seats they contested (out of 46). On 2 May 2012, the National League for Democracy MP-elects, including Aung San Suu Kyi, took their oaths and took office. According to the Los Angeles Times, “Suu Kyi and her colleagues decided they could do more by joining as lawmakers than maintaining their boycott on principle.” On 9 July 2012, she attended the Parliament for the first time as a lawmaker.

The next Burmese general election is scheduled to be held in 2015. Gradual change is what people are hoping for and hopefully lifting the sanctions will contribute to this. 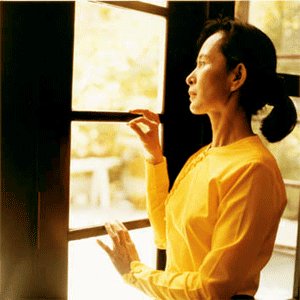 Her unbridled commitment for a democratic Burma came with great personal sacrifice. Aris’ visit in Christmas 1995 turned out to be the last time that he and Suu Kyi met, as Suu Kyi remained in Burma and the Burmese dictatorship denied him any further entry visas. Aris was diagnosed with (terminal) prostate cancer in 1997. Despite appeals from prominent figures and organizations, the Burmese government would not grant Aris a visa, saying that they did not have the facilities to care for him, and instead urged Aung San Suu Kyi to leave the country to visit him. She was unwilling to depart, fearing that she would be refused re-entry. Aris died on his 53rd birthday on 27 March 1999. Since 1989, when his wife was first placed under house arrest, he had seen her only five times. She was also separated from her children, who live in the United Kingdom, but starting in 2011, they have visited her in Burma.

She started her political career as the daughter of a national hero, but clearly made a name for herself based on her own accomplishments and ideas.